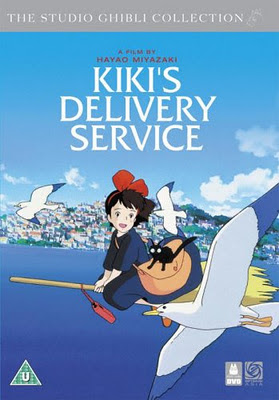 Plot: Having turned 13, witch in training Kiki (Takayama) leaves homes with her talking cat Jiji (Sakuma) as is traditional for all witches to leave home for a year on their thirteenth birthday. Despite processing almost no witch skills beside her ability to fly on a broom, which she is still not overly great at doing, she arrives in the city of Koriko were we is soon using her skill to setup a delivery service.


Review: For the longest time when I was starting off my own personal Anime obsession, this film was seen almost like a secret handshake between Anime fans, were a fan’s status was largely judged on if they had seen certain films, a list of which this film was one of those titles. Now while it might be hard to realise it now, with such a huge variety of anime titles easily available, back when I started collecting anime, the only label which was putting out anime titles here in the UK was “Manga Entertainment” who tended to favour the more violent and graphic titles like “Fist of the North Star” and “Urotsukidoji: Legend of the Overfiend” giving the misguided impression that all Japanese animation was like this, though in their defence they were also responsible for bringing two legendry anime titles “Akira” and “Ghost In The Shell” to Western audiences so it's hard to question if thier influence was detrimental to the cause or not. Still it would be much later that a lot of Anime fans got to discover the simple and innocent beauty of Studio Ghibli’s movies, which showed a polar opposite side to anime than most fans had been used to and ultimately has paved the way for less violent anime to gain distribution outside of bootlegs and late night showings on TV.

Out of the Studio Ghibli’s back catalogue “Kiki’s Delivery Service” is certainly one of my favourites, despite the fact that fan’s tend to frequently over look it, opting for the colourful characters of “My Neighbour Totoro” or the nature versus industry epic “Princess Monoke”, which is a shame as it’s certainly one of their best with its childlike (but not childish) innocence and curiosity, while also proving shockingly for a lot of western audiences at the time that Anime doesn’t have to be all giant robots and fan service schoolgirls.

“Kiki’s Delivery Service” differs from a lot of the Ghibli title, bar perhaps “My Neighbour Totoro” in that it has no real set course and instead starts off with the idea of Kiki leaving home, eager to prove to her family that she can make her own way in the world and is essentially just watching her daily progress towards this goal, with no major crisis or big evil to combat, the closest the film gets to either of these things being with the climatic Zeppelin chase which in itself comes almost out of nowhere, much like Kiki suddenly loosing her powers in the third quarter, which in itself is essentially more of a moral lesson in believing in your own abilities even when you feel like a failure. Still Kiki’s abilities are portrayed less as magical and more like an artistic skill, meaning that this loss of her powers could also be seen almost as a kind of writers block.

While Kiki going about day to day tasks as she goes about settling into her new life and unexpectedly setting up a delivery service, might not sound like the most gripping of viewing, it surprisingly is never dull and even more amazingly gives these things an almost magical feel. It could also be argued that for these reasons, that the film would seem almost intentionally aimed at a female audience, but somehow director Miyazaki still manages to keep the attention of both sexes a fact best highlighted in a comment one of my friends made, were he pointed out that he was knowingly watching a very girlie anime yet still strangely gripped by what he was watching.

Miyazaki’s obsession with flight is fully on show here from Kiki on her broom, to the Zeppelin and plane filled skies and her nerdy friend Tombo’s flying contraption (essentially a bicycle with a propeller) and the feeling of flight is truly captured from the gentle flights across the countryside to the thrilling climax which see’s Kiki whizzing through the streets and alleyways in pursuit of the runaway Zeppelin, while still maintaining the detailed crowed streets of the city packed with onlookers, rather than switching to the plain background as the character moves slowly towards the screen, as more traditionally seen as Miyazaki never risks losing this sense of flight, by scrimping on the finer details and these only make this finale only all the more chaotic and exciting to watch, event after repeated viewings.

Being a Ghibli film there are several options available when it comes to watching the films, with purists no doubt options for the subtitle track, while dub fans get a choice of two equally great dub tracks, with Disney providing a more star studded cast which see’s Kirstin Dunst take on the role of Kiki, while Phil Hartman provides the voice of Jiji, with this trend for star studded dub tracks continuing into future Ghibli releases. Still there isn’t much difference between the subtitle version and the dubbed version really outside of Jiji who in the dub track comes off as more of a wiseass than he does in the original subtitled version.

“Kiki’s Delivery Service” truly deserves to have it’s place amongst the best titles in the Ghibli back catalogue, especially with Miyazaki here on top form, with a project which was seemingly made with him in mind, especially seeing how it allows for such freedom to include his various trademarks, while also providing a gentle introduction to Anime for newcomers to both the genre as well as the films of studio Ghibli and Miyazaki.
Posted by Elwood Jones at 16:24