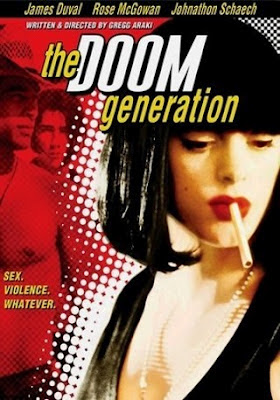 Plot: Jordan White (Duval) and Amy Blue (McGowan) find themselves on a road trip of sex and violence after a chance meeting with fellow outsider Xavier Red.

Review: A classic example of Director Gregg Araki’s more infamous style of filming, while also the second film in his “Teenage Apocalypse Trilogy”, a trilogy created from the use of reoccurring themes and ideas rather than characters and plot lines. This film was also the first of Araki’s films I ever saw, when I caught a late night showing back when I was still an angry youth starting college, were its punk rock sensibilities appealed strongly, much less the fact it was filled with gratuitous sex, which was still quite a rarity for films back in the late 90’s rather than our current over sexed decade, were full frontal nudity and sex has nowhere near the surprise factor it had back then. With this in mind I was eager to see if it still if the film still had the same appeal now that it did back then, coming back to it with an older view point and perhaps less angry standpoint.

Opening at an underground metal club were the words “Welcome To Hell” are written in fiery silhouette pretty much highlight the current state of society, for if the third film of this trilogy “Nowhere” was the end of days, this film is certainly the lead up to the pending apocalypse as society is quickly descending into a lawless cesspit of depravity and commercialisation, with the youth seemingly have long since become despondent and jaded about the world around them. It’s a view point which Amy essentially embodies as she scowls her way through this misadventure, colorfully cursing anyone who’d stand up to her, while seemingly only caring about her boyfriend Jordan. Jordan on the other hand is almost like the polar opposite to Amy and making him an even more surprising boyfriend choice, especially with his permanent positive outlook which seemingly steams from his naivety to the world around him. Jordan’s naivety and general worldly outlook especially comes into question when the couple rescue Xavier from a gang of punk goon (played by the band Skinny Puppy) a charismatic drifter who tends to invoke spontaneous act of violence whenever he is in any area for too long.

Violence of course being is one of the key themes of this film alongside cultural symbolism and relentless eroticism, with the violence in particular here being especially memorable let alone the trigger point of the trio’s misadventure stemming from the accidental killing of a quick stop clerk. Still it is a subject with Araki chooses to shoot in a variety of different ways throughout the film from humorous (a bar patron accidentally receiving a samurai sword to the crotch) to gratuitously graphic as seen by the death of the clerk who not only has his head blasted clean off, but then follows up by having said head continuing to incoherently burble away.

Meanwhile his other main obsession sex is shown in an unsurprisingly graphic style and literately to the point were nearly every other scene seems to involve Amy having sex with either Jordan or Xavier or both, as the film climaxes (in more way than one) with a spontaneous threesome. This development with the group dynamic never really sat right with me and even now still doesn’t exactly make anymore sense, especially when Amy is shown openly hating Xavier only to suddenly feel an uncontrollable urge to sleep with him, as soon as the first chance appears. Equally frustrating is Jordan’s reaction to this situation which he just happily accepts as if it’s a perfectly normal situation, rather than raising any kind of complaint!?! What is most surprising here though is Araki’s fascination with making a film that features purely heterosexual sex, something he seems especially proud off seeing how he opens with the title card “A Hetrosexual Movie By Gregg Araki”, while his other films had often approached the subject of sex with an open mind to showing all persuasions on equal terms, making the point of highlighting such a point only further confusing.

With Araki so focused on his cramming in as much sex and violence as possible, it is unsurprising that the plot is as paper thin as it is, with the sketchily drawn trio travelling down a seemingly endless series of desert roads in a continuing cycle of sex and violence, with the only real plot point outside of this being the reoccurring cases of mistaken identity which Amy causes with various oddball characters claiming that she is their ex partner and often providing the trigger point for further spontaneous violence, while making comparisons to Oliver Stone’s “Natural Born Killers” almost inevitable and while he might describe it as a black comedy or as some DVD covers proclaim “A Road Murder Sex Comedy” it’s far from the most humorous of films, with the humour content being strongly dependent on how funny you find the acid tongued put downs by Amy, especially when her vocabulary is interesting to say the least.

Shot with an almost intentional focus on making the film look as trashy as possible; Araki has seemingly created a teen movie which intentionally sets out to rebel against the cookie cutter teen movies of the Hollywood mainstream, as counters the virginal teens of those movies with his despondent trio here, who are more than happy to blitz their way through life in a haze of pot and sex, with the art direction containing an excessive yet controlled quality to it, while even the more normal sets still containing subtle surreal elements such as the quick stop sign which proclaims “Shoplifters Will be Executed” or the record store thought bubbles.

One of the more shallow Araki movies, it’s punk esq style of storytelling and film making will no doubt still ring true with some, but I can’t say that it is still a film which I look upon with the same awe that I did back when I first saw it, even though it is still a bizarrely fascinating movie for all of its flaws.
Posted by Elwood Jones at 00:14