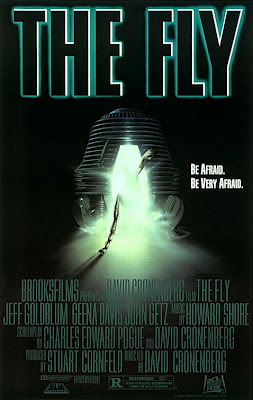 Plot: Seth Brundle (Goldblum) an eccentric yet brilliant scientist believes he has found a way to teleport from one location to another using his invention “The Telepod”. However while using himself as a guinea-pig, he unwittingly fuses his genes with a house fly which was trapped in the pod with him.

Review: For the most part the word “remake” can be considered to be a word almost a dirty as the word “reboot”, especially when films get remade seemingly only in the pursuit of easy box office dollars, as the studios attempt to cash in on the legacy of an established classic. Then of course we have a film like this film which not only remakes the classic 1958 movie, but rather turns it into something altogether more special.

Considering Cronenberg’s love of bodily mutation, disease and infection, it would in many ways seem like a no brainer for him to helm the remake, as it is essentially prime for the exploration of these key Cronenberg themes, but despite his love for the original, it was bizarrely only after he was offered the project by even more bizarrely of all people Mel Brooks, who despite being best known for his screwball comedies would also produce under “Brooksfilms”, films such as “The Elephant Man” and “Frances” opting not to use his name, encase people mistook the films for comedies, which is undoubtedly for the best here.

Rewritting large sections of the original script by Charles Edward Pogue, who still retains a writing credit here, thanks to Cronenberg’s insistence that Pogue’s script had served as the foundation for his own rewrites. Here he has crafted in his own way a love story, in very much the same way that “True Romance” can be viewed as a love story, for while both don’t contain the traditional structure of your run of the mill romantic film, it is certainly at the heart of this film, which is only made clearer when the film is broken down into its simplest terms for what we have is the story of two people in love, only one of them is dying from a horrible disease. It just so happens that in this case the disease is one which is turning him into a mutant man fly hybrid or “The Brundlefly” as he frequently refers to himself, as the true extent of his condition becomes apparent to him.

Goldblum is of course perfect casting as the ill fated scientist as his usual tics and stumbling dialogue only further help him embody the character of Seth, while even more surprisingly managing to project real on screen chemistry with Davis’s Veronica, especially with Davis and Goldblum being in a relationship at the time, which would usually equal zero onscreen chemistry which is thankfully not the case, with Davis especially deserving props for making such an unlikely relationship seem believable, even though it would seem that Veronica is using her feminine charms to get the story, it is really down to her performance that we can believe that their relationship is real.

Unlike the original which is played out in a more traditional b-movie style, with more of the focus being on the hideous transformation in order to maximize shocks. Here Cronenberg takes the time to focus on Brundle’s teleportation experiments, which when we join him is still failing to transport anything living, as shown by the messy failed teleportation of a baboon, with Cronenberg using Veronica’s video camera interviews to truly get in the mind of Brundle, looking at the frustration he finds with his failures, while also capturing the enthusiasm his work brings out in his despite this as he bounces enthusiastically around his lab with each breakthrough he finds giving him renewed vigor towards his goal. These video sections become equally important as Brundle starts to mutate it, as he records each new change first of all with a strange curiosity as he finds himself with increased strength and libido, aswell as ultimately sadness as finds himself becoming increasingly more monstrous in appearance as his body parts slowly disintegrate, with his transformation also causing him to adopt fly like attributes such as body forcing him to vomit bile on his food before consumption.

Released at the height of the AID’s epidemic, the film was initially seen as a parable on the disease, but as Cronenberg would confirm the film is infact about growing old as Brundle nears his final nightmarish transformation he is shown bent double and using walking sticks to move around with his once youthful looks now reduced to a wrinkled visage. Still it is clear how much fun Cronenberg is having here, especially with Special effects guru Chris Walas bringing the horrific and gradual transformation to life, while also providing further fuel to the importance of old school effects over the CGI, much like Rob Bottin’s equally incredible special effects work on “The Thing”.

While more certainly gooier than the original trilogy of films, Cronenberg has truly made a version of the story very much in tune with his own vision, something especially surprising for such a mainstream studio film and while he had originally hoped that the success of this film would give him the freedom to make any film he wanted, it would still take another two years to bring his then dream project “Dead Ringers” to the screen. Still if there was ever a film which justifies why Cronenberg is a director worth getting excited about this is it and while it might be a rare jaunt into Big budget mainstream film making it still retains all of his usual trademarks as well as the curious charm from his independent features and while it might be at times it might feel that your reaching for the sickbag perhaps a little too frequently especially on the first viewing, Cronenberg never uses such tactics for cheap shocks and never at the expense of the story. This is bold and exciting film making at its best aswell as at its most gooey.
Posted by Elwood Jones at 14:23