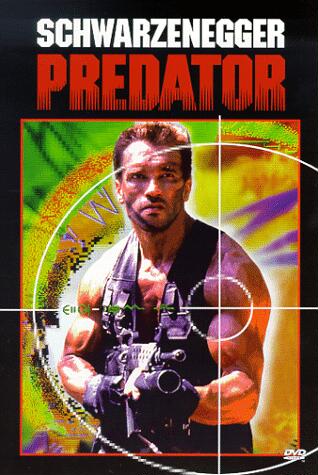 Plot: An elite Special Forces team lead by Dutch (Schwarzenegger) are sent on a rescue mission deep in guerrilla territory in Central America, unaware that his team are soon being hunted for sport by an extraterrestrial hunter.


Review: Another film from Arnie’s Golden period, this time towards the end of this career period, yet still showcasing all the usual trademarks I.E: One liners, cigars and a healthy dose of OTT action sequences, it is also one of my favourite Arnie movies and perhaps only rivaled by “Terminator 2: Judgement Day” for the number one spot, especially seeing how he is shown here at the peak of his career having established himself as a household name for 80’s action, a reputation he more than lives up to here.

Originally inspire by a joke regarding who Rocky would fight next following the release of “Rocky IV” were it seemed that he had run out of earthly opponents and hence meaning his next opponent would have to be an alien. Needless to say this was all the inspiration that writers Jim and John Thomas would need for their debut (aswell as thier best seeing how they would also be responsible for the likes of cinematic trash like “Wild Wild West”) script which was originally titled “Hunter”. Bizarrely Jean-Claude Van Damme was originally cast at the titular predator whose original design was that of an alien ninja, but proved to be a lot more clumsy than the now familiar Predator design created by Stan Winston with additional imput from James Cameron who would be responsible for the new look Predator design gaining a set of Mandibles, with the new design being commissioned after a frustrated Van Damme, tired of overheating in the clumsy original suit head butted a cameraman before storming off set and leaving the door open for  the 7’2 Kevin Peter Hall to take over the role and bringing the new look creature to life, while the voice was provided by Peter Cullen who is probably best known for voicing Optimus Prime and Winnie-the-Pooh’s Eeyore.

The film itself is a classic slice of 80’s action, especially considering that Dutch’s team are supposed to be a covert unit, yet not one of them is armed with a subtle weapon between them from Poncho’s (Chaves) grenade launcher to the memorable Minigun “Ol’ Painless” welded by Blain (Ventura) and in many ways they could be seen as the blueprint for the “The Expendables”, especially with their OTT antics as they clear out a guerrilla encampment, with Arnie spitting out some of his best one liners with nearly each bad guy he dispatches in what is possibly one of his best action sequences ever. Still up until this point the film is very much a men on a mission style movie, which is only given the sci-fi twist after this point with the introduction of the Predator. No doubt its a twist which would have been more effective back when the film was originally released than it is now, were the Predator like the xenomorph’s in “Alien” have become such iconic creations that you would be hard pushed to find someone who is still surprised to see the appearance of the Predator. Still it is a flawless switch in genres as the hunters soon become the hunted, with the technological advances and early nods to the warrior code of the Predator giving the film a nice twist, especially when the group are forced to resort to guerrilla tactics to defeat their foe, after memorably and downright bizzarely exhausting their ammo supplies shooting up a small section of empty jungle, not once to really question what exactly they are supposed to be shooting at in yet another classic moment of 80’s excess.

This comparison to “The Expendables” can also be carried over to the rest of Dutch’s crew whom are mainly played by action heroes of the era with Weathers, Duke and Landham all having appeared in other 80’s action movies, meanwhile Shane Black who appears as the groups comic relief Hawkins was mainly cast to keep an eye on director McTiernan who’d previously only directed one feature previous to being given this film and whose inexperience in the directors chair worried producer Joel Silver, though ultimately history would show that this would be unheeded especially when McTiernan would go on from this film to direct the equally epic “Die Hard” while Black would use the time to work on his script for “The Last Boy Scout”. Still it would be a real baptism of fire of McTiernan into big budget action movies especially after his misfire of a debut “Nomads”, with the cast and crew having to deal with cold temperatures of the surrounding jungle which required heat lamps to be used at all times, while frequently working on rough terrain. Equally problematic was the new Predator design meaning that Hall was working blind, leading to numerous occasions during the final showdown between Arnie and the predator were he was hitting him in the face by accident. Unsurprisingly Hall would remember the experience as being more of a “survival story” with even McTiernan breaking his wrist during filming.

Unsurprisingly being an 80’s action movie, the gore quota is unrestrained here with skinned bodies hanging from trees, exploding bloody holes shot through characters and a weighty body count (mainly at the hands of Arnie) all being the order of the day. However despite the graphic nature of these scenes, the film is still for the most part largely restrained and only gives the audience its graphic moments when realistically needed rather than just because McTernan can.

What truly makes this film so effective though is the soundtrack composed by Alan Silvestri, whose manages to effectively control the mood throughout with the film using two distinct styles throughout, with Dutch’s team being represented by the heavily orchestral moments of score which holds a processes a real military feel to it, while the predator is represented by heavy tribal drumming whose intensity, frequently grows the closer the creature is and suitably builds a natural sense of tension, with these two styles effectivly being combined when we witness both Dutch and the predator preparing for their final showdown. Still Silvestri's soundtrack would prove to be highly influential and it's influence can still be heard in modern action movies today.

To view the film as a solo entry, it is hard to see how the Predator managed to spawn such a franchise, especially when it works so well as a stand alone film and while they continue to try and find a way to make the Aliens vs. Predator franchise work the Predator films have turned into a fairly decent trilogy and one which can certainly hold its own against the Alien saga, even if if never achieved the same level of scope. Still this film remains a stone cold classic and one of those rare occasions in film making were everything just works. Yes it's loud and dumb....but by god is it alot of fun!!
Posted by Elwood Jones at 13:49