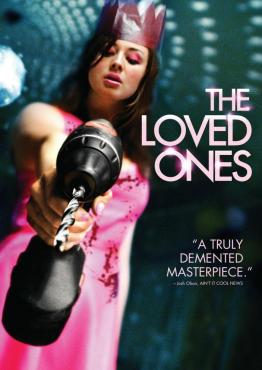 Plot: When Brent (Samuel) turns down Lola’s (McLeavy) invitation to the school prom, she concocts a plan for her own prom instead.


Review: Despite being released three years ago to zero fanfare, for one reason or another this film has suddenly become a hot topic in the horror blogging community, were in the space of the week I’ve seen posts from at least four different bloggers. Meanwhile it seems my finger had been far from the pulse (no doubt jammed somewhere else to paraphrase "Mallrats" Brodie) , having recorded this film ages ago yet only now finally getting around to watching it.

The feature debut of director Sean Byrne who is probably best known for his short films, a reputation which may soon be challenged by this film as it’s popularity continues to increase and with good reason as here he takes the usual torture movie conventions yet has somehow managed to produce a highly original film, which like it’s nastier predecessor “Wolf Creek” makes you wonder what it is about Australian film makers which allows them to still manage to make original films in what is fast becoming a genre almost as overworked as the Zombie genre, much less were they are drawing such vicious inspiration from?

The plot is simple enough with the shy and retiring Lola having eyes for the moody Brent and only wanting for him to take her to the prom, sadly to be shot down.  Possibly not the best decision Brent could have made seeing how Lola doesn’t exactly take rejection that well. Still Brent soon learns the cost of saying no to Lola, as she soon has him tied up in her house which she has converted into her own prom, with the help of her equally unhinged father (Brumpton) who is more than happy to ensure that his princess gets the prom she wants. Now while most directors would just see this as all the setup they need to get into unleashing their twisted ideas onto the screen, Byrne instead throws us something of a curve ball by breaking up the scenes of torture with what would at first seem to be random comedic asides as we follow Brent’s portly best friend Jamie (Wilson) as he manages to convince the hot Goth Mia to go with him to prom, only to soon find out that perhaps Lola isn’t the only unhinged girl at their school. Initially I was put off by the random cuts to Jamie’s prom night, but ultimately it is the right decision here as it adds a much needed relief to the essentially relentless scenes of torture and torment, which while it might remove some of the snarl from the film, certainly stopped it turning into another brutal assault like “Wolf Creek” which only helped me enjoy it more.

The real power in this film though comes from McLeavy’s performance which always stays on the right side of demented, without becoming comical especially as she frequently teeters close to the edge of farcical, while her out of tune . Still Lola is slightly more complex than your usual slasher, especially as she’s essentially bi-polar when it comes to her torture parties, switching on a moments notice from snarling confidence to crippling panic, especially when parts of her plan don’t work out how she originally planned them as especially seen during the scenes of her attempts at home lobotomy surgery something which only had me draw further comparisons between her and the equally obsessed Annie Wilkes from “Misery” with the shots of Lola and her power drill almost holding the same power as Annie and her sledgehammer. Were their obsessions differ though is in the fact that her obsession with Brent can be rooted to her serious daddy issues, which boil down to the fact that she wants to jump her dad’s bones. Still it is a fascinating relationship that she shares with Daddy (Brumpton) who seemingly is happy to do whatever it takes to keep his daughter happy, while also appearing to be responsible for some of the more disturbing elements of the film such as the lobotomised Bright eyes and no doubt the basement full of cannibals, while also hiding a nasty streak of his own which is slowly revelled as the layers of the bumbling bumpkin are peeled away to show his true colours. Such multi layered characterisation is a running theme throughout the film, with only a few characters such as Jamie actually being who they first appear with Brent being a mass of guilt and angst, as the result of his father’s death, something he deals with by self mutilation and generally keeping himself doped up, though no doubt his encounter with Lola has given him a whole new bunch of issues, especially when he finds himself tied up in her kitchen and rendered mute, thanks to her injecting his voice box with bleach, something which also adds another interesting layer to the film, as we are faced with watching a character who cannot speak or make any sound bar a raspy scream when subjected to the more extreme tortures that Lola and her father unleash on him over the course of the evening.

The gore which while frequently graphic which mutilation and impalement heavily featured, it is never at the same gratuitous levels as many of its contemporaries to which it is significantly lighter in tone as Bryne has crafted a film which very much plays by it’s own rules and is only all the stronger for it. Even more so after baring witness to the stream of clones which followed in the wake of the success of Eli Roth’s “Hostel” and while it still features the same kind of visceral seat-squirming visuals it still at the same times bothers to do more than just pile on the grime and gore, with Byrne seemingly fighting these conventions further by dressing Lola in bright pinks, while her mumbling rendition of “Am I Not Pretty Enough?” is nothing short of haunting and filled with the same loneliness which seemingly inhabits every aspect of Lola’s life, while only further ensuring that this is one prom your unlikely to forget anytime soon.
Posted by Elwood Jones at 14:36