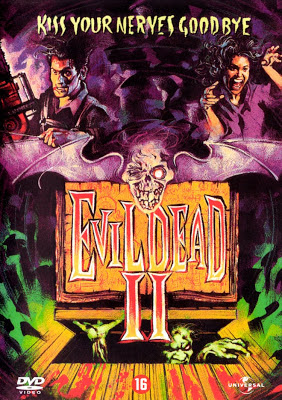 
Plot: Ash Williams (Campbell) and his girlfriend Linda (Bixler) take a romantic vacation to an isolated cabin in the woods. It is there that Ash finds and plays a tape of an archaeology professor (Peaks), reciting passages from the Necronomicon Ex-Mortis or the Book of the Dead, which he has discovered during an archaeological dig. The recorded incantation proceeds to unleash an evil force from the woods pitting them in a battle to make to dawn.

Review: Considering the sheer amount of carnage unleashed on the screen in the first film, it is hard to think how Raimi could even set about trying to top it, especially when it got one of the dubious honour of being banned as part of the video nasty scandal. Raimi himself was also not keen to give his debut film a sequel, especially as he saw his next film “Crimewave” as a hit and it was only after it flopped due to a combination of poor distribution and critical mauling that he decided to take up the publicist Irvin Shaprio’s offer to make a sequel. However struggling to find the required funds to make the film, help would come via Stephen King who’d written a glowing review of the first film which had also been used heavily during promotion for the film and who was at the time working with legendry Italian producer Dino De Laurentiis on “Maximum Overdrive”. After reciving a call from King, De Laurentiis agreed to fund the film especially being further persuaded by the high grosses of the original film in his native Italy.


The original plot had been to have Ash thrown back in time via a time portal to the medieval ages, an idea which was soon scrapped after Raimi only managed to secure 3.6 of the desired 4 Million he needed to make the picture, leading to him to essentially remaking the first film while as we now know the original plotline would go on to become that of the third film “Army of Darkness”. This decision to remake his first film is essentially a smart move, especially considering the original film was at this point branded a video nasty and as such still banned, while also meaning that Raimi could correct the parts of the film which didn’t work aswell as they perhaps should have. At the same time this claim of the film being a remake has been disputed as being more down to the fact that rights to show scenes from the original could not be obtained to allow the film to recap and hence leading Raimi to recreate these scenes instead. It would be these kinds of rights issues which also mean that George Romero gets nothing from his debut “Night of the Living Dead” which at last check had become a public domain movie as a result of these issues with the rights to the film.


The real heart of the film (if not the series on the whole) though is Bruce Campbell, who once agin returns as the long suffering Ash to battle his way through another night of terror, while he also becomes over the course of the wisecracking deadite slayer we have come to see him as essentially always being and this reworking of his character would truly be one of the good things to come from the sequel, as he straps a chainsaw to his stump and saws the end off his shotgun to complete his trademark look. Campbell of course embodies this role, while essentially being tortured by Raimi (who needs enemies when you’ve got friends huh!) who ensures that that Ash is on the receiving end of more brutal knocks than any other character in the film. With perhaps only Raimi’s brother Ted, who appears as the professor’s possessed wife, challenging Campbell for filming hardship as his suit constantly filled with his sweat which constantly had to be drained from the suit, further reinforcing the idea as to who needs enemies when your friends with Sam Raimi.


While this might be essentially a remake, the tone is very different to the first film whose focus was on unrelenting terror as here the focus here being on giving the film more of a humorous edge rather than making it a straight horror film as the first had been, with the majority of these comedy touches coming from Scott Spiegel who Raimi brought in to help write the script, with the duo drawing influence from various slapstick films including Raimi favourite “The Three Stooges” and the influence can be seen clearly on the screen, as characters suffer pratfalls while we are also treated to Ash’s disembodied hand flipping him the bird, all things which could easily have taken away from the film, but instead provide the much needed respite from the horror which Raimi unleashes on the screen here, especially as he somehow manages to outdo the first film, especially as he takes it to new dizzying heights of gore and splatter, especially when geysers of blood pour from the walls and floor.


Which the focus may be more on giving this film a more comedic edge than the first film, this is not to say that Raimi still doesn’t wheel out a new box of demonic delights, as he creations are now bigger and more grotesque than before thanks to the increased budget and while he largely aims to bring new shocks to the screen, he seemingly can’t resist bringing back his more notorious creation “The Angry Molesting Tree” even though it is on less controversial terms than before, while even giving this particular and originally faceless horror an actual face during the final epic showdown, which sadly doesn’t feature the same delirious mix of pie filler and stop motion animation meltdown that the original did. Still on the plus side Raimi is not such a tease with the chainsaw antics, one of my bugbears of the original were we are setup for some chainsaw action only to never actually see it, something well and truly made up for here.


One of the more interesting aspects of the film is really in how it plays out with the first half featuring Ash essentially being battered and tormented by the evil forces at work, which it would seem is the setup for the rest of the film, only for Raimi to around the halfway point throws in a fresh group of characters as the professors daughter Annie (Berry), her research partner Ed (Domeier) and locals Jake (Hicks) and Bobby Joe (Wesley) into the madness and while we have been introduced to them via the spattering of moments the film takes its attention away from Ash, they still feel like fresh and new characters and essentially more meat for he grinder the cabin quickly is becoming at this point. It is also interesting how well this sudden introduction of new characters works, especially considering the minimal amount of character development they have received at this point.


While Raimi might have been reluctant to make it, this film is the true calling card of his talent as he proved that you can amuse and terrify an audience at the same time, as like George Miller with “Mad Max 2: The Road Warrior” he successfully builds on what he established with the original while in many cases improving on his formula, in the process achieving that rarest of things a sequel that is actually better than the original. When it comes to turning splatter into an art form here Raimi excels in bloody spades!
Posted by Elwood Jones at 14:03