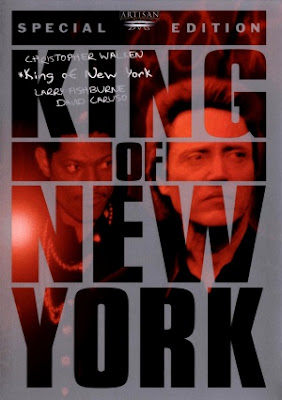 
Plot: Drug Lord Frank White (Walken) upon being released from prison sets about eliminating his competition, with the goal of financing a new South Bronx hospital. However Frank’s past comes back to haunt him when a group of overzealous cops lead by detective Roy Bishop (Argo), frustrated by the lack of evidence to nail Frank for the current street killings decide to take matters into their own hands.


Review: I would like to think that we have at least one director whose work is not so much of a grimy in nature, but essentially embraces the grime and dirt it is being forged from, which for some may bring to mind the Minister of Bad Taste John Waters, The splatter of Herschell Gordon Lewis or the downright randomness of Frank Henenlotter. Directors who with a frequently balls to the wall attitude towards censorship and thier craft often as a result making them too random or strange for mass consumption and as such destined to remain  the filthy secret of our DVD collection and our go to director when we feel like taking a walk on the seedy underbelly of seemingly decent society. For myself though Abel Ferrara will always be that director, for ever since viewing “Bad Lieutenant” on a late night TV screening way back as an impressionable youth, something about his work has always resonated with myself, perticularly in how he shoots New York as his vision is possibly as far away from the traditional New York fantasy as you can get and more in tune with the one which Scorsese showed us with “Taxi Driver” and it’s this vision of New York which Ferrara returns to here with his ultraviolent twist seemingly on  “Robin Hood”.


Taking on one of more rarer leading roles Walken here gives one of his more iconic, but sadly little seen performances despite the fact that the film is listed as one of the “1001 Movies To See Before You Die”, while it’s portrayal of power in the drugs trade makes it only the more surprising that it’s not in numerous rappers DVD collections unlike the vastly overblown and drawn out “Scarface”. Walken’s portrayal of White though is a fascinating one to say the least, for having left prison he shuns the usual going straight route we have seen so many times before and instead seemingly has realised that he is set to live out his days in the drug trade and that he instead might as well focus on getting back to buisness and concentrating more on were his profits are going instead with his original idea of running for mayor soon being switched in favour of financing his neighbour hospital. It is during an almost confessional confrontation with detective Bishop though that we truly come to truly understand Frank’s world view as he states

“I spent half my life in prison. I never got away with anything, and I never killed anybody that didn't deserve it.”


While going on to further elaborate on the sins of his criminal counterparts, blaming them for running the city into the ground while they grew rich off their trade, something he is clear to separate himself with, while brutally eliminating anyone who stands in the way of his new plan. Now while Frank’s intentions might be considered in some askiew way honourable he is still far from being a saint, as seen even more so with his shark like prescence happy to share a joke or even bust a few dance moves, only to turn deadly when crossed as especially seen by how he handles being snubbed by a mafia boss who he doesn’t shoot once but repeatedly even after he is clearly dead, even performing a drive by at a funeral, after his gang is attacked by Bishops's rogue cops.


Joining Walken whose commanding performance essentially owns the film, Ferrara has still assembled an impressive cast, though considering the star status of many of the cast, a lot of his casting choices have been later rewarded as the careers of the cast took off, for example Lawrence Fishburne is still so early (yet non the less noteworthy here) in career he is still listed as Larry while David Caruso and Wesley Snipes would only get their big breaks after this film’s release with Caruso going on to star in “NYPD Blue” while Snipes who was living in his car during filming would go on to make “New Jack City”. Still despite their lack of star power they more than hold thier own here with Caruso being on perticularly frenzied form and far cry from his more sedate tones he has become more recognisable for as Horatio on CSI Miami".


Ferrara curiously doesn’t give us much of an insight into Franks’s past and his rise to power, or even why he works with a predominantly black gang and has such a strong embracement of black culture as especially seen by his love of Hip hop music which frequently soundtracks any one of the various parties he throws with his crew. Still with Ferrara preferring instead to keep the focus strongly in the present the film rattles along at a quick pace, no doubt thanks to the half hour which was cut from the film’s original two hour cut while he blurs the lines between right and wrong instead preferring to work in the same shades of grey which Rob Zombie equally favoured for “The Devil’s Rejects” as neither criminal nor cop is seen as been on the side of right or wrong, which ultimately only adds the films raw and gritty edge, which makes it far from the easiest of films to watch and unsurprisingly during the films premier caused most of the audience including Ferrara’s wife to walk out, which is never a good sign when your own wife walks out of your movie. Meanwhile the Q&A session was opened with the question


"This film is an abomination. Why aren't you giving the proceeds to some drug rehab program?"


A suitable question especially considering how glamorised the drug trade is portrayed as, especially if you happen to be a member of Frank’s crew, while the film would be further dogged by scandal when both Laurence Fishburne and Nicolas St. John were booed off the stage at the second screening. Still while the film might have become one of the lesser seen films on Walken’s resume it still marks one of the strongest periods of work for Ferrara, who would follow it up with the legendry “Bad Lieutenant” and the sadly overlooked remake of “Invasion of the Body Snatchers” titled simply “Body Snatchers” and for Walken it is easily one of his best and only makes it more of a shame that he has not been given more leading roles over the course of his career….Long live the king!