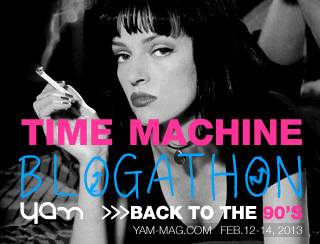 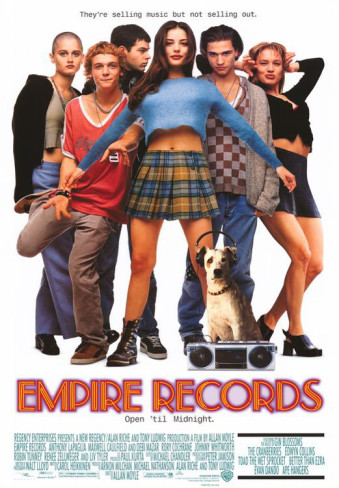 
Plot: Set over the course of one truly manic day as a group of employees at the independent record store “Empire Records discovers that the store is to be turned into a franchise store called music town, leading the employees to band together to save the store.


Review: As I noted with my previous post, this film is something of a time capsule for those of us who could be classed as being part of the MTV generation, not only in terms of its soundtrack but the whole styling of the film, let alone the fact it is about working in a record shop, something which I doubt holds the same appeal it did back when the film was released, especially with the rise of ITUNES and online music providers having effectively killed of the high street record stores. No doubt had this film been released now it would no doubt have them as Amazon staffers or something, much like how Peter Parker now works as a web designer in Spiderman than as a freelance photographer.


Still to watch this film you would still belive that working in a record store is still the cool career it was back then, with the script by Carol Heikkinen being based on her experiences working at the long since defunct Tower Records, which for the most part helps bring a sense of realism to the script, as anyone who has worked in retail can no doubt attest to, even if she bizarrely opts to not include any problem customers unlike “Clerks” which choose to make them very much a central theme. As a result it would seem have a job at "Empire Records" to be the most fun and laid back job in the world especially when manager Joe (LaPagila) for the most part has a pretty lax attitude towards his staff work attitude, only occasionally coming out of his office to put one of them back in line. The rest of the time the employees generally manage things themselves, even dishing out their own vigilante style justice when it comes to hunt down wannabe shoplifter Warren (Sexton). However despite this they still have formed between them an alternative family unit, despite being wildly different from each other and here it would seem that Joes’ real role in the store comes into play as he acts for the most part like the resident father figure, even more so for some of the group who openly confess to missing parental figures, while there is a real sense that without the store and each other that these assorted misfits would be ultimately lost.


Over the course of the film the group all have their own issues to deal with which generally are the typical teen movie fodder with A.J. (Whitworth) trying to find a way to tell Corey (Tyler) that he loves her, while Corey is on her own quest to loose her virginity to her crush Rex Manning (Caulfield), the fading and pompous pop star who is holding a signing at the store to promote his new album. Elsewhere and on the more extreme end of things is Deb who following her failed suicide attempt has randomly decided to shave her head. However this is not all recycled after school special and “Saved By The Bell” plotlines, as the resident oddball Mark (Embry) keeps the tone light with his sudden desire to form a band called “Marc”, while having the appearance of a kid with hyperactivity on a sugar binge as his generally sunny disposition never seems to waver, even when on the wrong side of a pot brownie trip in which he is rocking out with “GWAR” only to be then fed to their giant worm thing. Equally on hand to provide the comedic quota is beatnik Lucas (Cochrane) whose philosophical ramblings somehow help everyone else in the store to figure out the solutions to their problems, even though frustratingly they could have saved a lot of time finding out the fate of the store if he just came out with it like a normal person.


What is missing from the film though is any real kind of bad guy or even a meaningful threat for while the store might be closing, there is never any real sense of panic between the employee’s, just a lot of muttering of “Damn the man!” whenever the topic music town is brought up, with the store owner Mitchell (Bode) more laughable than threatening. As a result the closest we get to any kind of villain here is the pompous Rex Manning and seemingly styled on Robert Palmer, judging by his music video antics. While his actual villainous side might come more from his unrestrained ego aswell as questionable Salad dressing blowjob suggestion than any kind of act of real evil he still makes for a reasonable problem for the group to band together again, even more so with the distinct lack of any other kind of threat on hand here, while Caulfield has fun playing such a sleazy character


Despite being critically mauled on its original release it still proved to be a launch pad for the careers of many of the cast, as rightfully predicted by some critics. However despite being branded a flop on its original release ithas over the years become a real cult classic and rightfully so as here we have not only a highly likable group of characters despite being wildly varied from each other, but it is actually fun to spend time with them, with the film being shot in such a way it feels that you a part of the group rather than an outsider looking in, with random breaks of the forth wall only furthering this illusion. However since that original release the studio have felt the need to tinker with the original cut and wheel out a new version for the DVD, which gives the film fifteen minutes of originally cut footage, which unlike many previous directors cuts (Aliens, Blade Runner) his additional footage adds nothing to the film and infact only detracts from the film, especially as it results in certain characters being potrayed in a completely different way, with Gina (Zellweger) now seeming a whole lot more slutty than before, making this one of those rare occasions were I would urge you to hunt down the VHS version of the film, to get the original and definitive cut of the film aswell as a great piece of 90’s nostalgia.
Posted by Elwood Jones at 15:57