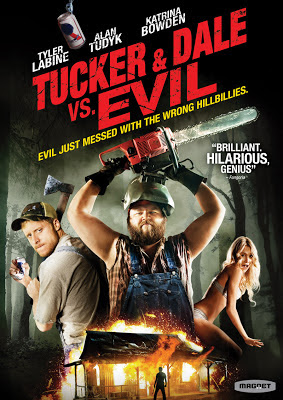 Plot: Best friends Tucker (Tudyk) and Dale (Labine) head up to Tuckers rundown holiday shack with plans of fishing, drinking beer and generally doing the place up, unaware that a group of college kids are also camping nearby. After rescuing one of their group Allison (Bowden), after a skinny dipping mishap, the boys soon find themselves on the wrong end of a series of misunderstandings which sees them being mistaken for the same crazed rednecks responsible for a series of murders in the area, as the college kids attempt to rescue Allison.


Review: Ever since Herschell Gordon Lewis unwittingly launched the “Hicksploitation” genre with “Two Thousand Maniacs”(1964) with it confederate flag waving loony’s showing a group of unwittingly tourists a whole new kind of southern hospitality , the redneck community have seemingly been demonised eternally with the likes of “I Spit On Your Grave” and “Southern Comfort" hardly helping while the words “Squeal Piggy” are still able to send a chill down the spine thanks to the mountain men of “Deliverance”, while Hollywood has continued to see them as the last easy target when in need of a bad guy fodder, especially with every other social group now deemed untouchable from movie xenophobia, while the hillbilly is frequently used as a representation of the more primitive side that as members of civilised society we have since long left behind. Still the red neck community should fear no longer as Director Eli Craig has set out to not only readdress the balance, but with “Tucker and Dale Vs. Evil” to also spin on the genre on it’s head as the roles are reversed. two hillbillies and

Despite being essentially a one joke film Director Craig has somehow managed to turn this film into so much more and what could be one of the funniest films of the year, as he shows us the flipside of the familiar horror scenarios and managing to really blow a simple to misunderstanding to the extreme, especially as the bodies start to pile up in a series of increasingly exaggerated deaths as wood chippers, hatchets and even the woods themselves prove to be surprisingly deadly to the unwitting college kids, with the majority of deaths in the film being accidents which only further paint Tucker and Dale as the psycho hillbillies they really aren’t.

The key reason for the success of the film lyes in the fact that Tucker and Dale are such a fun creations that they make the already brief run time fly past even quicker, as it’s a blast to be in the company of these two, as they play off each other with perfect comedy timing like the wilderness version of Laurel and Hardy, with Tudyk taking a break from playing oddballs and generally creepy killers which seem to be the majority of his recent roles since being thrown into the acting wildness, since the premature end of “Firefly” were he memorably played Walsh and here he’s crafts another fun creation as the frequently bewildered Tucker trying to figure out exactly were all these college kids are coming from, let alone why they seem to so intent on killing both him and Dale. Labine is also on great form as Dale, the slow witted best friend of Tucker who is just a big softy as well as painfully, despite his size frequently giving the opposite impression. Meanwhile the naivety of this duo also provides fertile ground to further play off familiar horror clichés, as they seem completely oblivious to the animal bones hanging from the walls of the shack, let alone the collection of newspaper cuttings about the college kids massacred by a killer hillbilly, instead focusing on the coupon for free hotdogs.

The college kids on the other hand are usual stereotypical group of slasher fodder with some of the group such as dumb blonde Chloe (Simmons) especially being played for laughs as she runs around the woods in her heels, meanwhile thanks to a fantasy campsite massacre any archetypes missing from the group, such as the geeky guy are covered for, while not only adding to the surprisingly high body count, but also adding gas to the groups misunderstanding as they soon start drawing comparisons between those rednecks and their current counterparts.

Gore wise things are played strictly for laughs, as the gore and violence is kept comical throughout with geyser of blood being the order of the day, with Craig thankfully never feeling the need to take the film into any kind of darker place, even when the kids are goaded into a misguided torture attempt by the real crazy of the film Chad (Moss) who not only doesn’t taken rejection well, with his darker side first making an appearance after being Allison, but somehow manages to get the group to frequently follow his misguided attempts to rescue her. Still each of these failed attempts only seem to make him more deranged, especially as his social circle slowly begins to dwindle, so that by the films sawmill climax he is a full blown chainsaw welding crazy.

Despite having the plot essentially being one joke, it never seems to be stretched thin even with seemingly filler scenes such as when Allison attempts to conduct a misguided therapy session to try and clear up the misunderstandings between the two groups while each refuse to put down their individual weapons. Meanwhile a blossoming romance between Allison and Dale is introduced with Dale slowly winning her over with his clumsy and goofy affections, yet this never feels in any way forced or unnatural even if it is the most unlikely of parings. Still were the film truly succeeds is in its accessibility, for you can watch this film with only the barest of ideas about the films it is paying homage to and still have a blast while smart dialogue and writing saves it from being reference heavy as the painfully tedious (Insert Movie genre here) Movies have become, having long since drifted away from their “Scary Movie” roots to the point were even the genre they are spoofing seems like an afterthought, unlike here were focus is never traded for a quick laugh, with the humour being largely organic with none of the deaths including the standout wood chipper death seemingly like anything other than an unfortunate accident, rather than a telegraphed sequence, with this style of humour continuing even as Tucker and Dale’s situation become all the more farcical as noted by Tucker when questioned by the local sheriff

“Oh hidy ho officer, we’ve had a doozy of a day. There we were minding our own business, just doing chores around the house, when kids started killing themselves all over my property.”

While this film seems set to be a film which will find its audience on DVD like so many cult comedies, it is still worth hunting down for the whole new take on Hillbilly horror which makes you wonder why no one has thought of doing this before. Still with Tucker and Dale we have a duo who I’d love to see further adventures from, perhaps seeing them unwittingly battling more traditional bogeymen, rather than being left as one hit characters as they currently seem judging by no immediate plans to follow this film up with a sequel, but for now here’s hoping this isn’t the last we have seen of Tucker and Dale.
Posted by Elwood Jones at 11:04