Final Girl Film Club: A Bay of Blood aka. Twitch of the Death Nerve 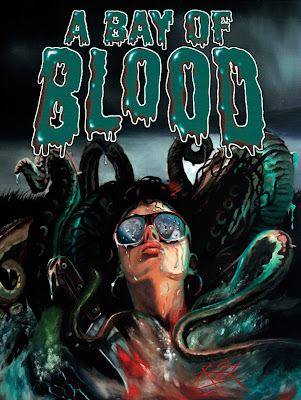 Title: A Bay of Blood aka. Twitch of the Death Nerve
Director: Mario Bava
Released: 1971


Plot: When the elderly Countess Federica (Miranda) is murdered by her husband (Nuvoletti), things take an unusual turn when he too is murdered by an unseen assailant before being dumped into the bay by the estate. What follows is an all out murder spree as both relatives and friends conspire to claim the bay for themselves.


Review: Despite being a key figure in both the giallo film genre aswell as in the creation of  modern slasher movies, director Bava is still a director largely unknown to most casual horror fans, despite his influence being frequently seen in the likes of “Alien”, “Prometheus” aswell as “Pitch Black” from which comparisons to Bava’s “Planet of the Vampires” can be drawn, while the influence of this film can clearly be seen as a big influence for “Friday the 13th Part 2” which even cheekily lifted two of the films murder scenes.  Needless to say this film was my first taste of Bava’s work, largely thanks to the “Final Girl Film Club” run by the multi-talented Stacie Ponder over at “Final Girl” who choose this as her August film club pick. As such it was really the push I needed, especially as I have never been the biggest fan of the giallo genre, yet at the same time I was keen to actually see some of Bava’s work to possibly understand why a man whose films have frequently been so influential is still so under the radar.


Over the years since its release the film has appeared under a variety of titles including bizarrely “Last House On The Left - Part 2” despite being released a year before Wes Craven’s original film. The constant name changes mainly being due to the film under performing at the cinema under one title, only to be re-released under another even though nothing about the film had actually changed. These name changes also saw the film being banned twice in the UK, the first under its more popular title “A Bay of Blood” before later being banned for video under the title “Blood Bath”. As a result of all these names changes the film now hold a record for more alternative titles than any other film released, with the majority of the titles going for cheap shock fitting of the exploitation nature of the film, which frequently feels like a string of gruesome murder scenes strung together by only the loosest of plots.


The favourite of Bava’s movies, its influence on the slasher genre is clear with its dense woodland setting and its largely stalk and slash approach to the killing of its young cast, is only something that would replicated time and time again over the years which followed its release. Meanwhile Bava also picking up cinematography duties here really makes the most of his minimal budget, reportly using a child’s wagon for the tracking shot and even making his shooting location of  producer Giuseppe Zaccariello beach house seem like a dense forest through camera tricks when there was reportedly only a few scattered trees on the location. Bava meanwhile shooting the film as quickly as possible before the limited production money ran out, which may also explain why the film feels like confused mess in places, none so much when we randomly have a bunch of partying teens stumble into the film, whose only purpose seems to be for them to be killed off, especially with no real further mention of them in the rest of the film, outside of a brief discovery scene of their assorted bodies.


The plot is at times a baffling mess, as the various members slowly reveal their own plots for claiming the bay. However due to the sheer number of plots flying around it can be confusing to keep up with who is who, let alone who they are plotting with. Meanwhile the none standard scenes of the partying teens seem to be part of a different movie altogether, especially when they have no real effect on the main plot, outside of adding to the body count and adding a little titillation to the proceedings.


Needless to say the real focus here seems to be on the murders themselves, with the film not only racking up a decent body count, with each new twist or betrayal amongst the family, all of which are voyeuristically realised by acclaimed special effects legend Carlo Rambaldi, who here really goes to town to produce some effective kills, as throats are bloodily slit, heads decapitated and even a spear is run through a two teens while having sex in a scene which as I mentioned earlier would be lifted for “Friday the 13th Part 2, alongside the machete to the face. Bava shooting these scenes with an unflinching eye, often lingering the camera on the aftermath for a few seconds afterward, to fully appreciate his killers handiwork, while these death scenes are frequently accompanied by frenzied tribal drumming as the soundtrack works itself into a frenzy of excitement, as it attempts to replicate the psyche of the killer, while interesting forgoing the more traditional crescendro we are used to seeing accompanied these scenes, instead cutting of the music dead when the death blow is struck, leaving the audience to view the aftermath in errie silence a style similar to the climatic chase motorbike chase in “Electra Glide In Blue”, which saw its slow motion crashes shot in the same way. While the gore today might have lost some its effectiveness thanks to the occasionally dated looking effects, with its decapitation being bettered by “Friday the 13th” making it hard to imagine that this is the same film which horror legend Christopher Lee walked out of during its premier, having been curious to see Bavas’ latest film having worked previous with him on “The Whip and the Body”. This however is not to say that it doesn’t still have its effective moments such as a brutal harpoon impalement and a chilling strangulation were each grunt and gasp seems to be amplified.


Ultimately I can’t say that this was an overly memorable viewing experience, though at the same time it is hard to deny its influence on the slasher genre especially when its gore frequently gets so creative, while its’ surprising and certainly original ending makes it almost worth the preceding 80+ mins and making it more of a curiosity of horror historians and genre fans than a must see.
Posted by Elwood Jones at 14:50