The Sexy Killer AKA The Drug Connection 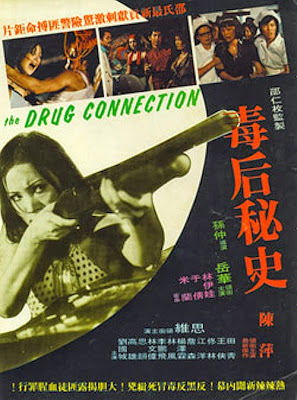 
Plot: When nurse Wan Fei’s (Ping) sister is hooked on heroin and abused by local drug dealers, she takes justice into her own hands as she sets out to take on the Hong Kong crime syndicates responsible.


Review: With such a provocative title it’s more than obvious what caught my attention about this little seen exploitation movie from the legendry Shaw Brothers Studios who unknown to most people including myself until lately, didn’t just make the Kung Fu movies they are probebly best known for, but also dabbled in a number of other genres such as this exploitation cheapie.


Essentially a Hong Kong remake of Pam Grier classic “Coffy”, while the plotting here is paper thin and more of an excuse to show what frequently felt like a stream of nudity, soft-core sex and of course being the Shaw Brothers a healthy dose of Kung Fu action. This of course is the standard fodder for Ping who like Grier specialised in playing tough feisty ladies, while at the same time not adverse to the occasional  shedding her clothes, as we not only see here, but in the handful of sexploitation movies she did over the course of her career. True she might not be as strong an actress as Grier which it is hard to not draw comparisons to especially with the plotlines being so similar, let alone both ladies affection for a shotgun.
Opening with a particularly sleazy scene of Wan Fei’s sister being drugged and subsequently used by a couple of sleazy gangsters, the film essentially establishes the tone within the opening minutes, while Wan Fei sets out on her quest for revenge with a strangely confident stance which sees her not only being able to weld a mean shotgun but also infiltrate gangs disguised as a prostitute with little trouble despite from all apperences having any kind of training of any kind to assist her other than pure guts and grit it would seem. Okay perhaps the plot in this respect should be taken with a pinch of salt, especially when the plotting is as paper thin as it is, while Ping has enough presence on the screen to pull of the role even if Grier does it better.


Director Chung seems to relish the sleazy atmosphere he creates here, especially when he frequently seems to be finding new ways to add to the films already high sleaze quota including a drug baron who likes introducing prostitutes to his home torture chamber and while Chung occasionally pushes these more risqué moments, there is ultimately nothing too shocking almost as if he was keen to not lose the film amongst the ranks of the numerous Pink movies being produced during this era. Still with such focus on the exploitation elements.


Despite the care free attitude towards nudity it is pretty surprising how largely restrained the violence is here and never exceeds what we have to come to expect from the Kung Fu output of the Shaw Brothers. Still despite being more restrained with the violence, the action scenes are not hampered as a result with Wan Fei proving herself rather handy with her shotgun, aswell as her dagger bracelet. Needless to say Wan Fei does kick a lot of ass while the ending while perhaps more subtle than you expect from this kind of movie is none the less satisfying which includes an exploding waterbed none the less, as she proves not for the first time that hell truly hath no fury like a scorned Wan Fei.


While its true that other similar films may have done this better such as “Sex and the Fury” or the “Sister Street Fighter” trilogy, but there is fun to be had here none the less, even if it is disposable at best. Ideally watch this as a warm up in a double bill as on its own will no doubt leave you wanting something alittle more satisfying.
Posted by Elwood Jones at 13:57