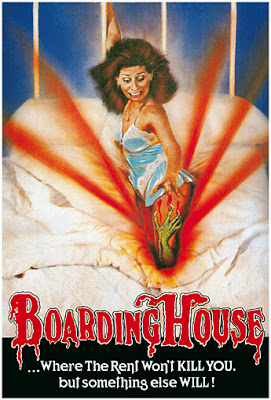 
Plot: The Hoffman house was originally the scene of several mysterious deaths and now ten years later the house is reopened as a boarding house by Jim (Wintergate) who has recently inherited the house. Now filled with attractive young women, the killings suddenly start again.


Review: What is it that makes a movie a cult favourite? Is it a question of humour, characters or perhaps it’s the endurance race of awfulness it puts the viewer through which might especially be the case with this film, which for one reason or another have over years become quite a cult favourite. The reasons why I still can’t really explain even as I sit here wondering how I can even begin to try and describe the randomness of this film, which was given to me to review by my friend and fellow obscure movie fiend Jenn over at “Cavalcade of Perversions” who I gave free reign to name any movie for me to review for her birthday.


First it is worth nothing that this is one of those rare films which was intentionally shot on video, something legend goes was the result of producer Elliot Van Koghbe reading an article in “American Cinematographer” about George Lucas experimenting with producing films shot on video as opposed to film. Of course this was all the inspiration that he needed to team up with Director Wintergate to produce this low-budget horror film with plans to transfer it onto film, because of course that wouldn’t make it look any worse than it already does, but alas they still went ahead and did it anyway. Needless to say if that bit of history wasn’t enough of a warning, then trust me the finished film is way worse than you could imagine, especially when the film has no logical storyline and generally seem like an excuse just to shoot frequent scene of gratuitous nudity which go a way to explaining its popularity.


So while the plotline might seem straightforward and just general slasher fodder, this film manages to do a remarkable job of making things way more confusing than they ever should be, not doubt thanks to the film makers being so preoccupied with cramming as much nudity into every shot of this film, meaning that it largely plays out like an 80’s version of “Girls gone wild” video. Of course a film can’t survive on just T&A alone (no seriously it can’t) so to break things up or when they seemingly couldn’t think to do next we also get to enjoy the oh so very cheap special effect shots, many of which make no sense what so ever such as the girl whose face randomly turns into a bargain basement Halloween mask for no explainable reason.


Not content though it would seem with horrible looking practical effects, Wintergate also throws even more horrible looking computer effects, such as the pixaly swirling mass which randomly appears or the titles which appear in lines in much the same way that pictures used to back when we all had dial up internet. These effects were all shot by producer Van Koghbe who it seems was equally ashamed of these shots that he is listed as Obee Ray or perhaps this was just a way of disguising the lack of crew clearly working on the film.


Elsewhere we not only have Wintergate playing the Vietnam veteran who randomly appears to do nothing but provide red herring (something given away way to early). We also get the random psychic abilities of Jim which not only generally involve him sitting around in his underwear bug eyed but also never seem to be overly useful at any point other than doing cheap parlour tricks like making the soap in his bath float aswell giving an excuse for a confusing psychic battle at the end, which fails to really make like the rest of the film a whole hold of sense, but alas this is the slow death that Wintergate chooses for the film.


The real piece de la resistance here though is the William Castle inspired warning gimmick were either a black glove appears on the screen, or a piece of cheap synthesiser music is played so that if you have a weak heart or “easily frightened by shocking gore”. Sadly this gimmick is used haphazardly for the first half of the film before being forgotten completely and ultimately comes off as a weaker gimmick than the “Fright Break” featured in “Bloodmoon” were audiences could leave and get a refund if they felt that they couldn’t watch the end of the film, but most of the audience used this chance to claim back their money only because of how bad the film was rather than anything to do with it being scary. Needless to say this gimmick like so much of the film being handled so sloppily ensures that it is just another thing which is memorable about the film for precisely the opposite reason Wintergate intended.


The makers of the film like to claim that this was the first shot on video horror, which of course anyone who seen the wonderful documentary “Rewind This” will know was in fact the equally little seen “Sledgehammer” a horror I’m quite content to put off like “Black Devil Doll” for the time being, especially as I’m still left confounded by this film and this was just the original cut of the film and not the stonking two hour plus directors cut released by Slasher // Video something else I can’t say I’m exactly in a rush to watch. Perhaps seeing how nonsensical this cut comes off perhaps the gaps are filled in the longer cut and what this version essentially could be is just the pervert cut. Even now I’m still unsure if Wintergate even was trying to make a decent film, or if his ego was so out of hand that he deluded himself into the idea that he had actually made something half decent, after all who could write scenes for themselves like the one were several of the girls are sitting with Jim in a hot tub and telling him how sexy he is while rubbing his chest. At the same time I have to wonder if I watched this film in the right setting, seeing how it was by myself when the majority of positive reviews of the film come from group viewings, which I can see making this film a lot more enjoyable and possibly the only way I might venture a second viewing for as cinematic endurance tests go this one is a doozey.
Posted by Elwood Jones at 15:36