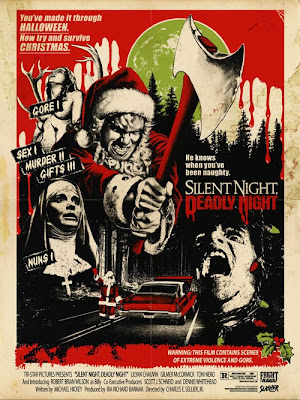 
Plot: As a young boy Billy was left traumatised when he saw his parents being killed by a man dressed as Santa Claus. Now years later he works in a toy store were he after he forced to dress as Santa Claus which causes him to suffer a psychotic break which soon sees him on a murderous rampage.

Review: While “Christmas Evil” might have been the first horror film to feature a killer Santa on the rampage, it would as I covered in my review for that film, soon be overshadowed by the controversy surrounding the release of this film, which many still mistakenly credit with creating the idea of a killer Santa. Unsurprisingly though parents didn’t exactly warm to the idea of the Christmas icon being warped in this way and descended upon cinemas in angry mobs to protest the film while critics branded the films as being pure shock tactics as shown in the documentary “Going To Pieces: The Rise and Fall of The Slasher Film”. Pulled from theatres by the original distributor TriStar Pictures, the film would two years later be re-released by independent distributor Aquarius films with a market campaign which unsurprisingly played off the earlier controversy while paving the way to the film becoming a cult classic.


It is kind of sad that the film is more remembered for the controversy it caused than the content of the film itself, which no doubt few (if any) of the films protestors bother to actually watch the film they were protesting. If they had, perhaps they would have discovered a film with surprisingly more depth than many would have expected from a slasher movie like this. For here great effort is given to establishing the cause of Billy’s psychosis, for he is far from the usual nutter of the week, for as a child we see him dealt the double whammy of watching his parents being killed by a killer dressed as Santa Claus aswell as the insane ramblings of his Grandfather, who his parents felt Christmas Eve was the perfect time to go visit him, because after all nothing spells out festive fun like a trip to an asylum. Sent to an orphanage Billy is further bombarded with a heavy dose of Catholic dose at the hands of the Sister Superior who firmly believes that Billy can be put on the right path through the use of regular punishment. Needless to say all this mental trauma leaves Billy as very much a ticking timebomb and a mind set which we see coming together with the slow burn first half as Director Sellier ensures that he highlights each piece which add to Billy’s eventual breakdown  and devoting the first forty minutes of the film to outlining these reasons.

This understandably can be frustrating to those expecting another throwaway slasher which was very much the case the first time I saw this film. Due to the build up to Billy’s snap, you can feel the tension being slowly cranked up especially during the scene were he is forced to play Santa, dealing with spoilt and figiting kids as he begs them under his breath to behave almost as if he can feel himself tittering on the edge. Needless to say when Billy does finally snap, he really wastes little time in making up for it and if variety is the spice of life, then Billy comes with a whole spice rack of creativity when it comes to his kills as he set out to punish those he views as naughty. A personal mission which sees him not only putting a fire axe to good use, but also getting creative with a box cutter, bow and arrow and even a set of deer antlers while racking up a healthy body count. However these victims frequently have no real connection to Billy and more often than not just happened to be in the bloody path he is carving on his way back to the orphanage.


While it might seem from the setting that the film is about a serial killer Santa, the whole costume is really more of a coincidence seeing how it happens to be what Billy is wearing when he snaps and unlike Harry in “Christmas Evil” is less fuelled by a Santa delusion, especially when he is judging people as “Naughty” it seems to be based more on Catholic dogma than anything to do with Santa’s naughty or nice list. However these judgements do lead to a creepy moment were Billy encounters the younger sister of one of his victims, who after being informed of how good she has been, hands her a bloody box cutter which is something I would have preferred to have been one of the candy canes we see him handing out to kids earlier in the film. As such the scene comes off slightly confused, much like the scene were Billy freezes while looking at a Christmas poster while the smaltzy “Warm Side of The Door” by Morgan Ames plays in the background.


Wilson though is really great as Billy, especially during the scenes requiring him to showcase his fragile psyche, even with his size and toned psyche he is still able to sell these moments, while at the same he never oversteps the mark when it comes to Billy’s psychotic side which never falls into a farcical performance even if it does largely consist of him growling naughty and holding a stone cold glare.


One of the real strengths of the film though is the soundtrack provided by Perry Botkin, Jr. whose soundtrack Sellier uses mainly to highlight the current state of Billy’s psyche with the music becoming more erratic the closer to the edge he gets. Outside of these moments he also provides some truly haunting themes for the rest of the film including the title sequence which is filled with dread and it only makes it more suprising considering that he was also responsible for also producing the soundtracks for both “Happy Days” and “Mork and Mindy” whose sunny setting are the truly at the opposite end of the spectrum to this film.


Creepy though is one thing this film has in spades from the crazy grandpa ramblings and the chilling psycho Santa attack on Billy’s parents, even the Christmas decorations frequently have a creepy edge to them, which really makes me wonder where these films find such creepy decorations or perhaps the 80’s Christmas’s were just a lot more creepier than today’s which is no doubt the case looking at some of the horrible jumpers of Christmas past which seem to haunt my childhood Christmas photos.


Needless to say this film is worthy of its cult status and while certainly heavier than “Christmas Evil” it still brings plenty of originality to the table, while audience seemed to prefer their Serial Killer Santa’s more icy cold than confused judging by how this film spawned a further four films, while “Christmas Evil” remained a solo curiosity.
Posted by Elwood Jones at 15:37