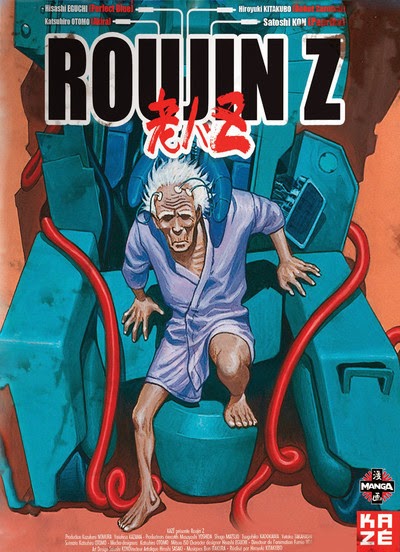 
Plot: A bed ridden old man is recruited by the Department of Health under the so-called “Project Z” in which he is given a special nursing bed with a built in computer to handle his every need. However when he brings projecting his pain and loneliness to his ex-private nurse Haruko (Barry) she sets out to rescue him, as the bed soon starts to take on the personality of the old man’s  dead wife.


Review: One of the seemingly long forgotten old school anime, it was around the time that I was first getting into the genre that I first saw the trailer for this film and typically it has taken me until now to actually get around to watching it and while the animation might look slightly dated by today’s standards there is still a lot of charm in the frequently amusing writing


Of course its hard to tell the humorous tone from the opening which sees the old man who soon will find himself at the centre of this bizarre tale, shouting out that he has wet himself while an overweight cat sleeps on his chest. True this might be a pretty dark opening to what is actually a very light hearted and fun film and while it might have you reaching for the eject button I can only urge you to stick with it past this rather uncomfortable opening, which is not so much about shock tactics and seems to have been included by director Kitakubo as something of a wakeup call to the audience about the treatment of the older generation, a theme which certainly runs through this film even if it might be under the disguise of another giant mecha anime.


Centred around a new prototype bed the Z-001, which provides the ultimate in around the clock care for its elderly user, as any number of hidden screens and arms appear when needed to take care of any needs the user might have and in the process eliminating the need for home nurses or family members to burden themselves with caring for elderly relatives. While it might seem like the perfect solution it would seem that the users don’t exactly feel the same way and what initially starts out as a straightforward film about Haruko trying to rescue her former charge, soon become awhole lot more surreal when the bed, seemingly develops a mind of its own with things only getting stranger still when it takes on the personality of the old man’s deceased wife complete with seemingly an endless list of pet names for her husband.


While the opening might be uncomfortable viewing the film surprisingly actually gets lighter and more humorous the longer it goes on, especially as the bed starts to evolve from its original form as it begins to adapt and absorb other machines into its framework as it makes its way through the busy streets on a single minded mission to get to the sea. A plan which the project heads are soon quick to launch into action to stop happening, while ensuring in the process that the action quota for the film is handled as the film soon changes from a comment on the health care system to a chase movie, before finally ending with some come frenzied mecha on mecha action, as another robot is unleashed to stop the Z-001.


Despite coming being written by Katsuhiro Otomo, who most memorable gave the world the legendry “Akira” this is a much smaller and lighter film, even though it was released in the wake of that film and ultimately it wouldn’t be until 1995 with the release of “Ghost in the Shell” that any film would come close to beating it, while director Kitakubo would much later equally come close with his own “Blood: The Last Vampire”. Still despite the lack of scale the film still manages to make its own impact with some beautifully detailed setting aswell as Haruko being joined on her mission numerous colourful characters which this film certainly doesn’t have a shortage including a group of elderly hackers while even the bed takes on a playful personality even if it’s essentially just a synthesised voice.

True it might lack the grandeur of some other anime’s, especially in these times were fans are literally spoiled for choice with the range or titles which are available and even more so by the standard for anime which Studio Ghibli have established, this remains still a fun dose of nostalgia for older anime fans, while the more open minded fans able to get past the older style of animation here will still find this an enjoyable film, which doesn’t outstay its welcome.
Posted by Elwood Jones at 23:37