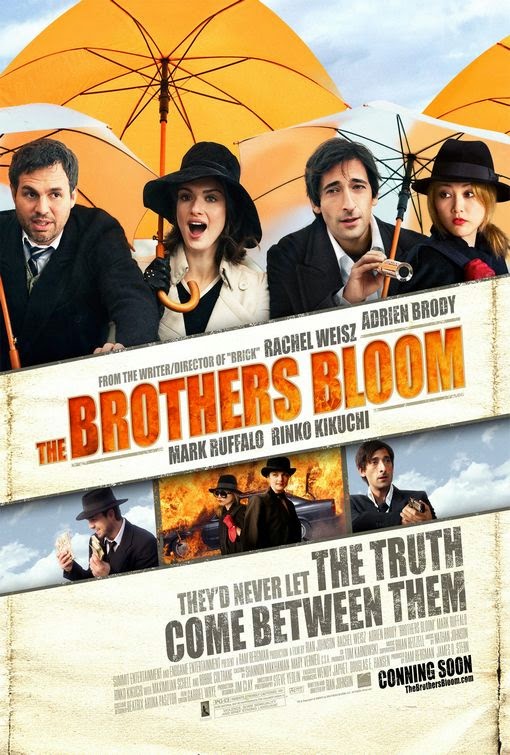 
Plot: Stephen (Ruffalo) and Bloom (Brody) are brothers and career con artists who travel the world with their largely mute sidekick Bang Bang (Kikuchi) working every more intricate schemes to swindle millionares. Having tired of the life Bloom decides he wants out only to be drawn into one final scheme to swindle the eccentric New Jersey heiress Penelope (Weisz), who he soon finds himself unexpectedly falling for.


Review: Thanks to some pretty horrible distribution this film unsurprisingly slipped under the radar for most people, as despite being the follow up to director Johnson’s critically acclaimed neo-noir debut “Brick” here in the UK it seemed to constantly be subjected to continual delays in its theatre release before eventually shuffling onto DVD with zero fanfare. Despite this Johnson continued to direct other projects mainly in TV most notably for “Breaking Bad” before the release of his hi-concept time travel thriller “Looper”.


Once again bringing a modern twist to a classic setting, here Johnson shoots the film with retro styling while throwing in the occasional modern element to remind us that the events are actually happening in modern times than the 1940’s styling would have you believe it’s set in, with Johnson unsurprisingly admitting to find inspiration for the film from the likes of “Paper Moon” and “The Sting”. At the same time he once again proves himself in procession of an eye for interesting characters as he once again gives us a cast of colourful and interesting characters.


At the centre of the story the two brothers are great characters thanks to Brody and Ruffalo alongside Weisz and Kikuchi embodying their roles, with the chemistry being Brody and Ruffalo being especially believable as the brothers who skills have kept them isolated from the outside world, to the point where Bloom feels that he doesn’t know who he is anymore from the years he’s spent playing various roles in the schemes concocted by his older brother. Together they fill in for the others shortcomings to form a strong team with their sidekick Bang Bang handling the more specialised aspects of their schemes or precisely blowing things up. Bang Bang of course is classic creation and one which could easily have stolen the film from the leads, as barely says a word throughout the film communicating via simple gestures which never fail to express what she is feeling at any given moment, even at time carrying on whole conversations as seen by when she questions Blooms sexual activities from the previous night. Still Kikuchi with her interesting outfit choices and real talent for visual comedy truly owns this role and left me truly wanting to see more of this character.


Rounding out the foursome is Penelope another colourful character thanks to her habit of collecting hobbies ranging from playing the harp and photography to the more random such as kung-fu and juggling chainsaws to help her cope with her self-imposed isolation. Of course this makes her the perfect mark for the brothers latest scheme which sees them posing as antique smugglers attempting a steal a rare book in Prague which Penelope is more than participate in. Weisz brings a great energy to the role even spending time learning to look like she knew how to do the assorted hobbies Penelope has amassed including playing the banjo, violin, guitar, piano, aswell as juggling, break dancing, skateboarding and giraffe unicycling. Help with the skateboarding and rap skills would surprisingly come from Brody who is surprisingly proficient in both skills. Sadly I was unable to find any footage of any of these training sessions as personally I never knew the guy had such skills, but then I didn’t know that Owen Wilson could skateboard either until her showed up in the Spike Jonze directed skateboard movie “Yeah Right”.


Always a fan of twist here, this proves to be the undoing for Johnson who seemingly got caught up with the colourful characters who appear throughout that the plotting became kind of secondary. The main issue being with the actual plot that Stephen devises that ultimately becomes so overly complex that it becomes far too confusing at times to follow and understand the roles which everyone plays or what the actual objective really is. This confusion is only added to by what is essentially an extended cameo by Robbie Coltrane whose star power makes his character ultimately seem far more significant than he really is and really the kind of role which should have been given to perhaps an actor of lower status, not that it isn’t of course nice as always to see Coltrane as always.


Maximillian Schell in what would ultimately be his final role adds a touch of villainy to the proceedings as their former mentor Diamond Dog, though thanks to his sporadic appearances and lack of any real development comes off weaker than I would have liked especially when he is supposed to be the films big evil, though ends up coming off as a morality comparison, to make the brothers schemes seem less evil by comparison.

While the film is full of Johnson's usual visual flair especially when it comes to his eye for the smaller details which frequently add to scenes throughout the film, its just a shame especially when he I giving us such fun characters that the plot is frequently so confused that it stops me from recommending this film more, but as a flawed watch you can do worse.
Posted by Elwood Jones at 12:34