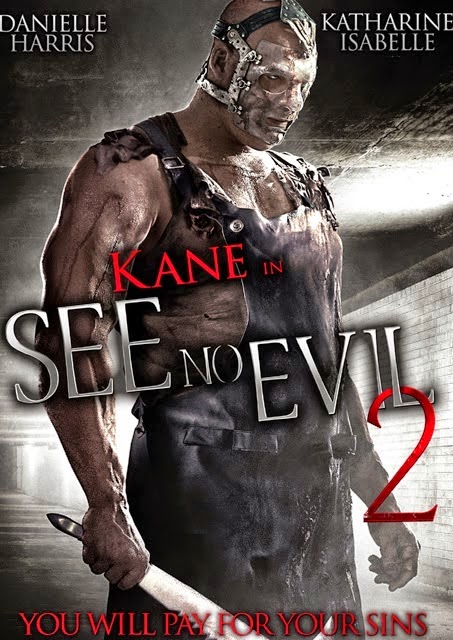 
Plot: Following on directly from the events of the first film the bodies of Jacob Goodnight (Jacobs) and his victims are transported to the city morgue, were Amy (Harris), Seth (Eriksen) and their boss Holden (Eklund) are currently working the graveyard shift. At the same time Amy’s friends have planned to throw her a surprise party at work unaware that a recently revived Jacob Goodnight will soon be crashing the party.


Review: The sequel to the second and arguably best film to currently have been produced by WWE Studios even though “The Marine” to date has managed to spawn three sequels, something which only raises the question as to why it’s taken until now for the studio to commit to producing a sequel. Unquestionably though it would seem that the Soska’s rise through the Horror ranks has been nothing short of meteoric especially on the back of breakout hit “American Mary” now serving as their calling card as they continue to produce horror films in their own distinctive style and despite this being the first film they’ve made which they didn’t write its an originality that here once more shines through.


It would of course be kind of fitting that after almost two decades of playing the wrestling boogyman for the WWE as the big red machine Kane that he would be given his own horror franchise and a Jason Voorhees style character to call his own. Sadly this seem that it wouldn’t happen after the first film hardly set the world on fire, though the reasons why I’m still not sure off. Thankfully the Twins got the gig to give him a second shot and despite not working from their own script but rather one devised by first time writers Nathan Brookes and Bobby Lee Darby, the twins still manage to bring a lot of their style to the film and even kick the character of Jacob Goodnight up several notches from his original appearance to become a much more rounded slasher than we got in the first film.


The cast here is comprised of largely indie and unknowns, though we do get not one but two scream queens with both Danielle Harris and Katherine Isabelle who once again shines under the direction of the Soska's even if she is this time on supporting cast duties, as she one again leaves you hoping that she continues to be regular player for them, especially considering how she remains cruelly underappreciated as an actress, despite her recent appearances on “Hannibal”. Elsewhere Michael Eklund continues his streak of WWE films by appearing here let alone giving me something lighter to compete with his psyche scaring performance in “The Divide”.


While it could be considered that Jacobs is playing essentially his wrestling persona only in a different wrapper, thankfully this not the case as Jacobs once again nails the role providing moments of intimidation alongside a Jason style abused and mother dominated psyche, highlighted here largely through flashback sequences which only highlight the screwed up homelife his character had, while at the same time filling in the reasons behind his modus operandi. The character also gets something of a facelift or atleast gets a cool looking Perspex mask aswell as a whole new toybox of surgical implements to unleash bloody carnage with, although it was nice to see that him still bring out the trademark hook and chain which again he uses with surprising accuracy as we get to see with one of early kills here. The only thing that did bug me about the character is that we are never quite sure if he’s supposed to be a zombie seeing how he dies at the start of the film or if he’s just tougher than old leather (and trust me he takes one hell of a battering) and somehow able to control his heartbeat which perhaps unintentionally felt like a throwback to Poppy Z. Brite’s serial killers in love novel “Exquisite Corpse”.


The kills all shine for their originality as various surgical implements are put to good use while one kill in particular which I will resist the urge to spoil truly caught me by surprise, even more for how out of nowhere it came, while being added to thanks to some well-timed slow-mo footage. At the same time the morgue setting makes for an interesting change of pace while at the same time providing easy access to the implements that Jacob Goodnight is soon putting to good use with the scene in which he opens a cupboard to revel rows of shiny surgical tools and implements being unquestionably one of my favourites of the whole movie.


While the film is unquestionably in the traditional slasher mould, the Soska’s are not afraid of tweaking the format so that just when you think you have the film figured out they change the rules, ensuring that your kept guessing as to how this one will end right up to the end. At the same time there is an unquestionably strong female element that they bring to the film as female characters are as empowered and strong as the male characters with one of the key examples coming in the form of the sexual aggressive Tamara (Isabelle) who when not engaging in acts which verge on necrophilia, is forcing her boyfriend to go down on her, reversing the roles and empowering the more traditional slasher role for the slutty girl.


True the film has isn’t without its flaws with scenes of the leads mobiles being put into a safe, before the only character who seemingly knows the combination is killed off is never brought up again despite seemingly being setup as an element of peril, but potentially this could finally be the film to kickstart “See No Evil” as a series for WWE Studios to rival their seemingly endless line of sequels for “The Marine” they are currently churning out and more so if they entrust it to the Soska’s to build upon what they established here. In the meantime we can at least look forward to their next project with the studio with the prison movie “Vendetta” which will see them working with another WWE giant “The Big Show” let alone their currently in development adaptation of the comic book “Painkiller Jane” which if this film is anything to go off, we should be very excited for.
Posted by Elwood Jones at 23:53