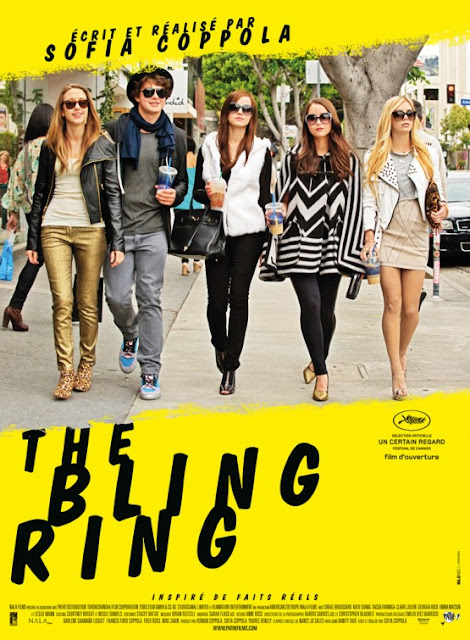 
Plot: Based on the true story of fame obsessed teenagers who broke into the homes of their favorite celebrities and their eventual downfall.

Review: Is it a sign of the current state of society that this is now the second film I’ve seen now based on a magazine article a trend which started with “Pain and Gain” and with this being the second. Still thankfully this is far from dumb film making, even if its subjects are far from the sharpest tools in the shed as director Sofia Coppola continues her on going obsession with celebrity in its various forms with her fifth film, which this time draws inspiration from the Vanity Fair article “The Suspects Wore Louboutins” about the titular Bling Ring; a group of celebrity obsessed teens who broke into the houses of celebrities, stealing cash, clothes and jewellery and whom over the course of their crime spree stole in excess of $3 million in cash and belongings.

Shooting from a stand-off perspective here Coppola chooses to play observer rather than making the audience part of the gang, more so as their criminal activities continue to spiral out of control. Needless to say its only a matter of time before the group begin to enjoy perhaps a little too much the faux celebrity lifestyle they have carved out for themselves from their burglaries or from selling on the items they choose to not keep for themselves. Still what sets this film apart from the numerous true life crime dramas is the brazen stupidity of the group in question, for these high schoolers don’t don disguises or balaclavas and frequently brag to their friends about their exploits while posting pictures of themselves posing with their ill gotten gains over Facebook, so that it’s only essentially a matter of time before the law catches up with them, with of course the big question of course being just how long it will take before they come unstuck .

Making up the group we have ring leader and wannabe fashionista Rebecca (Chang), whose choice of fashion school only seemingly stretches as far as where there girls off “The Hills” go. New kid at school and Rebecca’s chief partner in crime Marc (Broussard) wants a lifestyle brand, while the trio of Nicki (Watson), younger sister Emily (Rock) aswell as Nicki’s best friend and adopted sister Sam (Farmiga) are home-schooled in lessons torn from the self-help bestseller (And general universe botherer) “The Secret” by their new age mum (Leslie Mann), which perhaps along with their already spoiled and care-free lifestyle might explain their lust (like the rest of the group) for celebrity.

Despite sketching out the group members with quick strokes and minimal focus on detail, what Coppola surprisingly does here is essentially tell us everything we need to know about these essentially shallow individuals, without any unneeded padding or attempts at trying to figure out what makes them tick, especially when all this group cares about is what can be seen on the surface even more so when their aspirations are soon so focused on fueling their faux celebrity lifestyle, especially as their become increasingly lax with their criminal activities, while flashing their cash and generally hovering up coke. Like with Harmony Korine’s “Spring Breakers” this is youth lived through excess and little much of a damn being given to the consequences of their actions, as they continue to fuel their own self-delusions.

Once more Coppola shows herself as a highly visual director, with each of the heists taking on their own style, from the single sustained wide shot of reality star Audrina Patridge’s home being raided as Marc and Rebecca work their way through it room by room. Elsewhere she takes a more voyeuristic trip around the rooms of Paris Hilton’s mansion which was actually shot on location, taking in the excess and trappings of wealth that the group so badly crave, as she shoots the scene like a criminally charged edition of “Through The Key Hole”. Elsewhere the crimes are followed via google earth and TMZ reports, while occasionally cutting away to an insight from one of the key players in this scheme often accompanied by them trying to place more of the blame on another group member, especially in the case of Nikki who frequently tries to play for the sympathy of the public, while trying to portray the image of a good girl lead astray, when the truth couldn’t be more different.

The cast assembled here while largely unknown with the exception of Watson and Chang, they still manage to give a highly believable performance as this group, while I would have to also at the same disagree with the exaggerated praise which Watson has received for her role here, which essentially just build on what she started with the irritating “Perks of Being A Wallflower” and as such see’s her once again trying to play against the Hermione role she has become so synonymous with, by exhibiting general low level bad girl behavior, while far from doing anything to stand above the rest of the cast with Chang for myself being by far the strongest player here, from the devious looks she flashes to Marc as she randomly breaks into cars, to steal left behind cash and jewellery, to her frequently cool demeanor as she attempts to escape to Vegas and pin the blame on her fellow group members.

The downside to the film though is that Coppola gets so caught up in the robberies and the downward spiral of the group, that when it comes to the sentencing it feels rather rushed, with no desire it would seem to focus on the aftermath of these events, outside of a brief catch up. Something which might be frustrating to some, especially when it leaves the focus of the film being kind of limited in scope, but nevertheless this is still another strong movie from Coppola even if it might not be her strongest work to date, it is still an engrossing watch while also providing an interesting statement on celebrity driven youth and the allure of the celebrity lifestyle.
Posted by Elwood Jones at 23:55