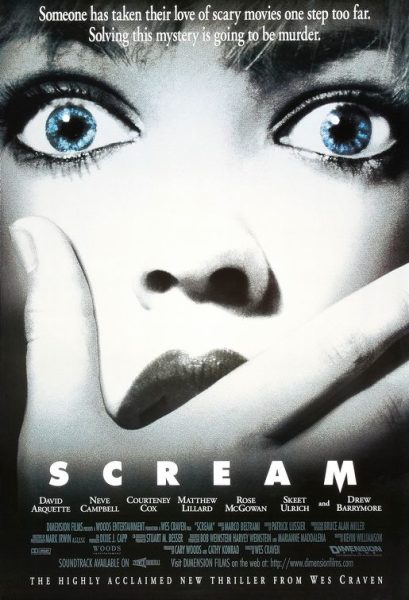 
Plot: One year after her mother’s murder Sidney (Campbell) finds herself wondering if there is a connection between her mother’s murder and a new spate of murders being carried out, as both Sidney and her friends soon find themselves being targeted by the killer.


Review: While it might not seem it today “Scream” is unquestionably an important horror film let alone one  which was released when horror was essentially a dead genre. The genre itself having long since sunk into cliché characterisation and plotting leaving all but the most hardcore of horror fans tuning out. However this films release came as something as a breath of fresh air to the genre as it acknowledged with almost a knowing wink the rules which had been established by the films which came before it while at the same time feeling like giving the audience something new and fresh as it toned down the violence and nudity which had been such a key element of the 80’s in exchange for genuine tension and shocks.

At the time of its release Wes Craven had like his preferred genre seemingly lost his edge as one of the original masters of horror as he floundered with attempts to revitalise “The Nightmare on Elm St.” franchise with the meta “Wes Craven’s New Nightmare” to mixed reception, while his newer films such as “Vampire In Brooklyn” and “Shocker” seemed to lack the same magic of his early films which had established his name as a horror director of note. Here though he seems to have fully rediscovered his mojo as here he attempts to reinvent with some considerable success the slasher movie while at the same time giving the horror community a new icon with the “Ghostface” killer.


Right from the start Craven is keen to ensure that he keeps the audience guessing as he opens with the now legendry death of Drew Barrymore who had been marketed as being the lead character in all the promotional for the film ensuring that her death not only made for an opening which grabbed its audience by the throat especially if they hadn’t had it spoiled ahead of time, which frustratingly seemed to happen for most viewers thanks to the gory payoff. However it’s the simplicity of this opening in which Barrymore’s airhead high school student is forced to answer horror questions in an attempt to save her life as well as that of her boyfriend tied up on the porch, while the mysterious caller reminds her of horror movie conventions which he soon proceeds to play out as she finds herself unwittingly drawn into her own horror movie.
Sidney while on the surface might seem like another typical final girl, here she is not so much the shy and retiring virgin, as she is introduced having a heated relationship with her boyfriend Billy (Ulrich) but one which has been severely hampered by the death of her mother, leaving her emotionally unwilling to take things further despite Billy’s best attempts. Billy on the other hand is perhaps one of the big flaws here…okay lets just accept that there will be spoilers from here, but then like “The Sixth Sense” and “The Empire Strikes Back” it’s a twist is now pretty much common knowledge. That being said Billy is so obviously the killer from the first time we see him, while Ulrich’s who had been cast due to his similarity in looks to Johnny Depp and who here attempts for dark and moody instead end up coming off more psycho, let alone the fact he continues that bizarre 90’s trend of guys coming in through bedroom windows, having started with “Clarissa Explains It All” and continues here as we are left wondering why no one can seemingly use a darn door!
Sidney and her friends are all interesting in their own way, while at the same time seemingly written to avoid the usual cliché archetypes (the jock, the slut etc) with perhaps Randy (Kennedy) being the exception here as the film geek and whose role other than to provide the humour quota is to fill in the gaps in the audience horror movie knowledge as he so memorably outlines the rules for surviving a horror movie at the finale party. This however is not to say that any of them are any less disposable than your usual slasher cast, it’s just they are more interesting and developed than most. Even outside of the main group we still have some great moments with Tatum’s (McGowan) dim witted police officer brother Dewey (Arquette) and driven news reporter Gale Weathers (Cox) whose luminous green suit I only somehow noticed on this recent rewatch, while leaving me wondering if this could ever have been considered a good look.
One of the standout elements back when the film was released was how toned down the violence was, especially compared to the splatter of the 80’s and at the same time the highly suggested scenes of violence we get here don’t leave you with the feeling that your missing something with the opening drawn out death scene undeniably more haunting to watching than had it been a splatter heavy quick kill. That being said Craven still knows when to tease the audience and when something more graphic is required such as the scene in which Billy and Stu (Lillard) take turns stabbing each other, which is shot with such an unflinching eye that the fact that Craven refuses to cut away only adds to the rawness of the scene. At the same time when it comes the death scenes themselves the film really works for maximum effect with most of them coming with a certain amount of a chasing or tormenting before the payoff. At the same time there is also a real sense of originality and even now most of them still as fresh as they did when the film was released even if Tatum getting stuck in the catflap is none the less amusing even after numerous viewings.


True this isn’t the most perfect film with the twist over whose the killer being essentially signposted with Billy coming off as more of a characture than an actual real character, with the real mystery here being why they are carrying out the killing rather than whose actually doing them, but even that doesn’t really make a huge amount of sense and is only stopped from being more of a detriment thanks to the rest of the film being such a fun and entertaining ride. Equally while the film is supposedly following the rules of a slasher, its interesting that despite emphasising the rule that if you have sex you die, Sidney only finds the empowerment to defeat the killers after she has sex with Billy, equally this is not so much of a gripe seeing how it abolishes the idea of the virginal beauty being the final girl, it was just strange to see the film establish its rules only to break them for some tasteful titillation.


While this film seems to have been written off by many horror fans due to its popularity, let alone the spot on parody of “Scary Movie” (which was also the original title for this film) which burned this film and “I know What You Did Last Summer” which left most people with more than a humorous impression of what this film was like.  However it cannot be ignored how this film would revitalise the horror genre, while inspiring a wake of imitators such as the aforementioned “I Know What You Did Last Summer”, “Urban Legend” and err “Valentine” all which would fail to capture what Craven gives us here, which even Craven himself would fail to replicate even despite “Scream 2” coming close this remains not only an important film within the horror genre, but also a reminder that the horror genre can still produce a surprise like this even when mired in cliché.
Posted by Elwood Jones at 09:36