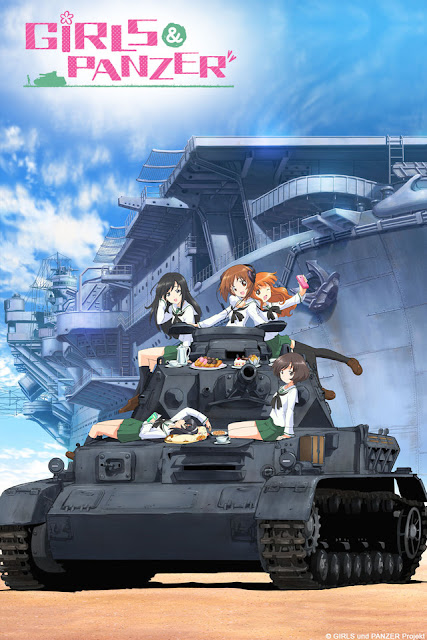 Perhaps because it’s been awhile since I’d watched any anime that I felt myself drawn to check out this series,  which also has the distinct advantage over most other anime of being a mere 12 episodes compared to the 100+ episodes that most series seem to be stretched out currently.
Set in a world were schools are based upon converted aircraft carriers and Tankery is a class which can be taken alongside flower arranging and tea ceremonies. Now arriving at Oarai Girls Academy it’s a world that Miho is looking to escape from despite her family’s legacy with the sport as the result of an incident during a match for her previous school Kuromorimine Women’s College which left her traumatised and reluctant to compete in the sport again.  Unlike her previous school though Oarai hasn’t fielded a tankery team in over twenty years and in a case of bad luck for Miho has now decided to reboot its program despite only having a ramshackle collection of old WW2 tanks.

Now essentially forced to compete again, Miho teams up with her new friends which include the boy crazy Saori, the gentle Hana, the tank obsessed Yukari and lethargic yet genius Mako who manages to learn how to drive a tank minutes after scanning through a handy instruction manual. The other tank crews of course being none the less thrown together with each tank being fielded by a different social group including the student council, a disbanded volleyball team who give all their commands like they are on a volleyball court, a group of history buffs who all dress like different famous generals and a trio of frenzied hall monitors who perhaps take their duties alittle too seriously.  Needless to say they all manage to embrace their roles on the team, much like Miho who soon rises to become a skilled tactician as the series goes on.
This is an anime which essentially rests on the idea of its audience getting behind schoolgirls engaging in tank battles for sport if controlled ones were they strike at each with impressive looking explosions which surprisingly never kill anyone taking part. Equally this show somehow manages to switch between gentle light hearted comedy and intense drama during the tank battles especially when the girls constantly find themselves being outnumbered by the teams fielded by the rival schools especially with their seemingly being no rules on the amount of tanks any team can field in a match.
The tank battles are truly the highlight of this show with these scenes combining high angle shot with views though the tank’s rangefinder to great effect. At the same time with each opponent the girls face providing their own tactics it ensures that the battles are constantly exciting to watch, more so when they often rest on a skillfull play from Miho to gain the win. The fact that they are played so seriously only coming as more of a surprise especially when the teams are shown customising their tanks to match their personalities when they first get them, only to suddenly and without reason become uniformed as soon as they enter the Tankery tournament .
The tanks for the most part are animated with a sense of realism to them however the limitation of this are frequently thrown out of the window when required as she frequently see tanks moving with the same kind of grace and drifting skills not seen since the likes of “Dominion Tank Police”. Despite these far-fetched moments of super skilled tank driving it somehow manages to not seem to fantastical and instead only adds to the excitement of the action scenes, even if we know that there’d be zero chance of such things working in real life.
Outside of the battles scenes the series tends to fall apart slightly with many of the characters being given little to no depth outside their surface colourful characters, with many being known better for the group they belong to or their looks than any kind of personal qualities. Elsewhere plotlines are equally less developed with Miho’s family issues being quickly wrapped up despite being introduced as a major plotline for the series. That being said the series moves at an enjoyable pace and helps to gloss over a lot of the flaws as you instead find yourself looking forward to the next battle rather than what’s happening outside of the tournament.
While everything is wrapped up in this series it still has left me interested to see more and while the recent spin off film picks up after the series, I’d still be keen to see another short series like this to further utilise these characters and unique premise. At the same time its light nature and limited episode run makes it a non-threatening starting place for the non-anime fan looking for something a little different.
Posted by Elwood Jones at 14:34