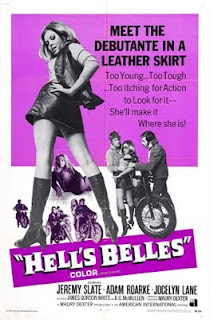 If any aspect of cult cinema embodies the spirit of wild and carefree rebellion it’s the “Biker genre”. From its beginning in 1954 with the release of “The Wild One” staring a young (and less gelatinous and egotistic) Marlon Brando as the black leather jacket clad Johnny Stradler the leader of “The Black Rebels Motorcycle Club) who roll into Carbonville during a motorcycle race with the intention of stirring up trouble. While it might seem alittle twee to modern audiences the film was greeted with shock and hysteria by the press of the day, while the British Board of Film Censors (BBFC) banned the film till finally awarding it an ‘X’ certificate (the equivalent of today’s ‘15’ certificate) when they allowed it to be released fourteen years after its original release, the original letter of rejection for certification stating that they were of the opinion that the film presented a
“spectacle of unbridled hooliganism… with no more than a mild censure from a police office, would be likely to exert a harmful influence in that very quarter about which anxiety is felt and would expose the Board to justifiable criticism for certificating a film so potentially danger on social grounds”
Unsurprisingly all this controversy resonated with the alienated youth of the time who loved the idea of the motorcycle riding rebel. While in the UK the battles between Mods and Rockers did little to ease the fears of the censors and general public leaving them to hold out on the film till they felt that the film had become too dated to appeal to the potential delinquents of the film whose rebellious nature they felt the film would only fuel.
Despite the controversy which surrounded “The Wild One” it would take the exploitation cinema legend Roger Corman to really launch the genre with “The Wild Angels” as he saw biker films as a way to revive the flagging Western genre seeing the biker film as its modern day equivalent with bikes replacing the horses. At the same time the wild nature of these films made them perfect fodder for the audiences of Drive-in’s and Grindhouse theatres who made up much of Corman’s target audience for the films he was producing especially with their common themes of revenge and the desire to live free and without the oppression of “The Man” (popular themes for the Blaxploitation films of the 70’s) which played perfectly in a time when civil liberties was still a key subject with the classic “Easy Rider” truly providing the embodiment of these themes.


“Easy Rider” would prove to be another influential title not only for how films were made, but the genre as a whole which soon saw more focus on storytelling as well as more essentially the riding sequences as producers attempted to hold onto an audience that had evolved and now craved more from these films than thrilling scenes of adventure and wild delinquency. It’s would being during these finals years for the genre that we also saw some of the most interesting films being produced such as the Blaxploitation influenced “The Black Angels” and the bikers in Vietnam “Nam’s Angels” aka “The Losers”; a film inspired by head of the “Hells Angels” Sonny Barger sending a telegram to President Johnson offering the Angel services as “gorilla fighters” (sic) which Johnson might have turned down but it did end up making a pretty decent biker movies as well as one can also be seen being watched by Fabienne in “Pulp Fiction”. 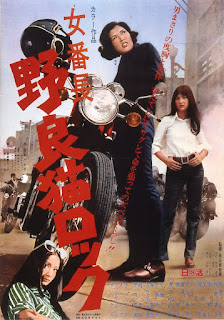 While stateside the genre might have been winding down but at the same time it also began to attract international attention with Japan giving us the “Stray Cat Rock” series whose first entry “Delinquent Girl Boss” memorably gave us a motorcycle / beach buggy chase through the streets of Shinjuku, Tokyo. Coming towards the end of the golden age for the genre, its presence would in Australian cinema as Ozploitation memorably brought its own twist on things with Australian cinema at this point already renown for its love of car chases really pushed the action side of the genre with the likes of George Millers “Mad Max” and its sequel “Mad Max 2: The Road Warrior" both memorably featuring psychopath bikers aswell as some equally memorable stunt work often shot on roads unofficially closed down by the production team. We would also get with “Stone” arguably one of the most iconic moments to be featured in any biker movie as it featured a funeral procession complete with a motorcycle Hearse and hundreds of bikers thundering down the highway.


Not to be outdone Britain too would throw its gauntlet down with “Psychomania” which not only brought a horror element to the biker movie as a biker gang called “The Living Dead” make a pact with the devil to become immortal, while also being led by the frog loving Alex DeLarge clone Tom. Despite gaining a cult following in the years since its release, many consider the film to mark the end of the biker film genre as exploitation cinema moved onto other areas as the times changed. The bikers which had once been the focus now being pushed into the background or taking on the antagonist role especially with the increase of interest in post-apocalyptic movies of the 80’s were the marauding biker gang was a common sight.


Nowadays the biker movie is all but a forgotten concept outside of the occasional throwback that the Neo-grindhouse genre has given us such as the Quentin Tarantino produced “Hell Ride” aswell as the equally awful“Dear God No!” and its sequel “Frankenstein Created Bikers” leaving my genre fans with mixed feelings for the genre. At the same time it’s a genre which hides some great hidden classics especially during the 60’s and 70’s and while a lot of it can be seen as perhaps overly campy or grimy for some tastes for the more adventurous movie watcher there is still plenty to enjoy. 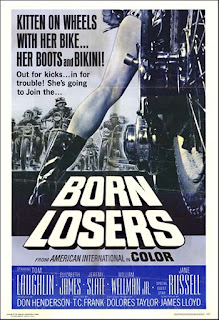 Motorpsycho – Directed by Russ Meyer’s just before “Faster, Pussycat! Kill! Kill!” this film is not only noticeable for the lack of his Ultravixens, but also for being the first film to give a portrayal of the disturbed Vietnam veteran, many of which had returned from the war and drifted into motorcycle gangs unable to handle the return to civilian life.  The film has also inspired the name of the Norwegian Progressive rock band aswell as being refrenced by “White Zombie” in the song “Thunder Kiss ‘65’”


Born Losers – The first of the “Billy Jack” trilogy following the “Half-breed” American Navajo Indian, who is also a Green Beret Vietnam Veteran aswell as a hapkido master who has taken to living in the California mountains in his attempts to escape from society. Things don’t however go according to plan as he finds himself having to defend the town of Big Rock against the members o the Born Losers Motorcycle Club. A commercial success despite a negative critical response, the film would be followed by “The Trial of Billy Jack” and “Billy Jack Goes To Washington”.


Angel Unchained – Angel feels that his days as a biker are coming to an end and breaks away his gang “The Nomads” to try and find his own way in the world only to find himself caught up in a conflict between a hippie commune and the local rednecks leading him to call in his former gang to help provide protection for the commune.


Werewolves on Wheels – One of the few films to combine both biker and horror genres see also (Psychomania, I Bought A Vampire Motorcycle) and directed by Michel Levesque who had previously been the art designer for Russ Meyer. This film was largely used as double bill fodder but still has a fun hook as Adam the leader of “The Devil’s Advocates” is unwittingly cursed along with gang with Lycanthropy (the posh term for Werewolf) and its not long before they leave a bloody trail in their wake as they hit the open road.


The Hellcats – A film no doubt already known to fans of MST3K, here the gender roles are flipped as crime boss Adrian uses  the female motorcycle gang The Hellcats to carry out his drug runs. However when a detective is killed by one of Adrians henchmen leading to his army sergent brother and girlfriend to go undercover as bikers to infiltrate the Hellcats to get their revenge against Adrian.
Authors Note: Originally posted as part of The LAMB "Cult Chops" feature
Posted by Elwood Jones at 05:10

Email ThisBlogThis!Share to TwitterShare to FacebookShare to Pinterest
Labels: An Introduction to..., Biker Movies, Cross blogging, Listomania, The LAMB