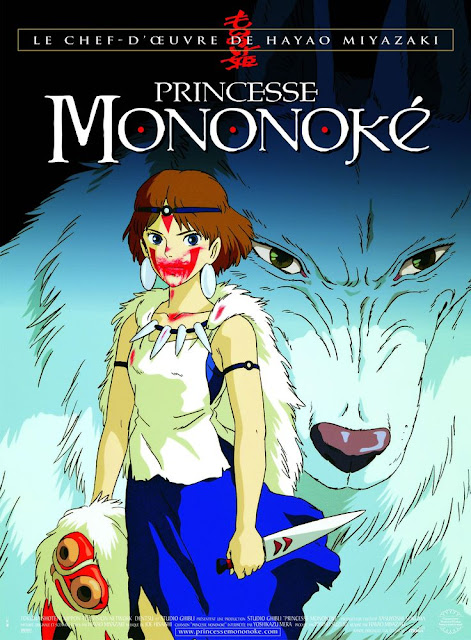 Plot: After being cursed defending his villiage from a rampaging boar-god turned demon, Ashitaka (Crudup). Now he must venture to the western lands to true and find a cure, only to soon find himself caught in the battle between the residents of Irontown lead by Lady Eboshi and the forest gods.

Review: When we look at key Anime titles its often far too easy to go straight to the likes of “Akira” and “Ghost In The Shell” and overlook the titles of Studio Ghibli which unquestionably played a key part in bringing Anime to western audiences with this film in particular being of the key titles in their extensive back catalogue while this film would also be the highest grossing film of all time in its native Japan until the release of Titanic which came out the same year.

Returning from his four year break from directing after “Porco Rosso” here legendary director Hayao Miyazaki brings a much darker vision to this film than had been previously produced by “Studio Ghibli” aswell as a more revolutionary animation style for the time as elements of the film used computer animation to blend and support the traditional cel animation with a prime example being the writhing worm like demon flesh which appears throughout when one of the gods is corrupted. At the same time Miyazaki ever the perfectionist personally corrected / redrew more than 80,000 of the 144,000 animation cels which make up the film.

A sweeping and epic production, the film really hits the ground running with the opening attack on Ashitaka’s village this is another film which really shows the potential for animation as Miyazaki once more refuses to believe that the medium should be limited to childish fare as here he crafts a very grown up fantasy tale as limbs are torn off and battlefields are shown covered in mass casualties. This of course is nothing new for Studio Ghibli as the previous films have featured some surprising moments of violence such as a villain being crushed between then hands of a clock and a small army being dropped out of the bottom of a flying airship its just before they’ve been covered more by the general charm of the film, though I don’t think Disney where expecting what they got here when they agreed to distribute the film which also under their agreement couldn’t even edit the film to fit in more with their catalogue, though they did release it into fewer theatres than originally planned seemingly in response to their editing request being refused.

The environment, a long time favourite theme of Miyazaki and here he once more get to make it the central theme as the meat of the story is based around the ongoing battle been man and nature in this case the residents of Irontown whose expanding town and need for resources puts them in constant conflict with the forest gods in particular the wolf goddess Moro (Anderson) and her adopted human child San the self-dubbed Princess Mononoke. The ongoing rivalry between San and Lady Eboshi is one of the highlights of the film with Eboshi having command of explosives and advanced weaponry, while San rides into battle on her giant wolves while demonstrating lightening sharp reflexes which makes their confrontations such a thrill to watch. It's intresting though that Miyazaki never brands either of those characters as being the villian, even though it can be assumed that San is the heroine of the pair, while Eboshi on the other hand is hardly the villian as she does only what she think is best for Irontown than actively seeking to destroy the surround forests.

Also thrown into the mix is the wandering monk Jiko-bo (Thornton) who despite his friendly nature might be the most devious character of them all, as he plans to use Ashitaka to locate the Great Forest Spirit whose head he plans to capture for the Emperor believing it grants the powers of immortality.

For Miyazaki the forests which surround Irontown are home to giant animal gods and playful spirits presided over by the forest spirit which has the power over life and death, Miyazaki here managing to combine his sense of fantastical wonder and delight with much darker moments than we have come to expect from his work and yet somehow it all complements each other so that we can have scenes of Joko-bo’s men infiltrating the forest wearing the skins of the slain boar army along the adorable head rattling kodama.

As to be expected from a Studio Ghibli film the animation is sumptuous throughout while complemented by the orchestral soundtrack composed by Joe Hisaishi. At the same time the dub track while not perfect does feature a fantastic cast who all embrace their roles while including a subtle turn for Gillian Anderson as the giant wolf god Moro.

While perhaps not having the same surface charms of the other Studio Ghibli films this one has real depth especially with its characters and storytelling which never feels the need to dumb things down for its audience, while also knowing just how dark to go before pulling back. Here Miyazaki is clearly working at the heights of his powers crafting something truly special which truly lives up to its reputation of being an essential anime classic.
Posted by Elwood Jones at 22:47