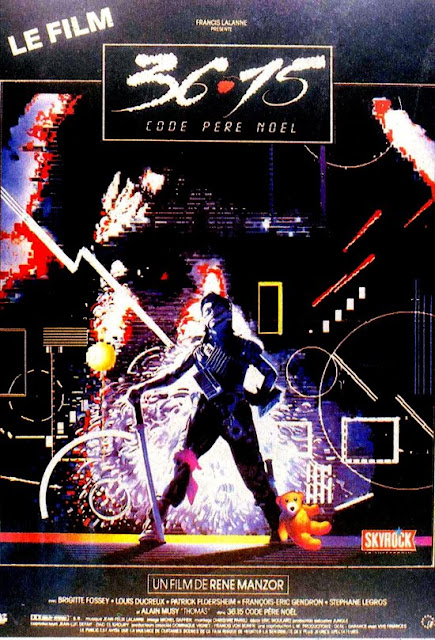 Plot: When Thomas is left alone with his frail Grandfather on Christmas Eve it is down to him to save them both from the psycho Santa who breaks into their mansion.

Review: Since hearing about this film on the “Cinema Sewer” podcast it has become something of an obsession to track it down as every copy I found was without subtitles or for some reason if it did have subs they where in Spanish, but finally the internet came though and I was able to get hold of a copy of this film which honestly was worth every bit of hassle in getting to see it.

Playing in many ways like a precursor to “Home Alone” we are introduced to the action movie and technology savy Thomas while a song which sounds strangely like “Eye of the Tiger” yet at the same time appears to be Christmas themed blasts away in the background. Thomas right from the start is quickly established especially when his introduced sporting a Patrick Swayze mullet and dressed up like his action heroes as he runs around his family mansion which we also find out he has wired up with all kinds of security devices and traps as demonstrated in the opening by him capturing his pet dog using a secret trapdoor.

Bizarrely his single mother Julie (Fossey) doesn’t seem to have any qualms about her son’s action movie obsessions or even more the fact that he is cutting holes in the floor for trapdoors which she happily jokes about over breakfast which I can pretty much tell you wouldn’t have happened with my own parents. Perhaps its because he looks after his frail and almost blind grandfather (Ducreux) that she gives him more leeway, but its an adorably close relationship that Thomas has with his Papy who is equally supportive of his Grandson’s hobbies while no doubt for adding a couple of questionable activities to his list of hobbies as he is in one scene shown having Thomas drive him around.

After his best friend Roland (Gendron) tells Thomas that Santa Claus doesn’t exists he puts together a plan to catch the jolly fat man on video using a surveillance system he’s wired up in the mansion which also means getting to see some wonderfully retro computer screen of his supposedly hi-tech system. Unfortunately the creepy and as it also turns out psychotic Santa (Floersheim) who Thomas’s mother just fired from her store after he got a little too handsy let alone violent with a young girl and now finding out that Thomas is home alone makes his way there to get his revenge.

Floersheim is unquestionably one of the creepiest killer Santa’s that I have seen as he spray paints his hair white with manic delight to his arrival in the mansion where he straight away kills in front of Thomas his pet dog while showing zero hesitation about such actions. From this point on we enter into that same territory which proved such a selling point for “Home Alone” as Thomas sets out to engage in Guerilla warfare with this killer while at the same time trying to ensure the safety of his grandfather. Unlike “Home Alone” or any of his 80’s cinema kid counterparts Thomas doesn’t turn into a wise cracking and fearless smart ass but instead remains a believable in his actions as he is frequently shown as being scared for both himself and his grandfather, to the point where he is shown during one low point calling out for his mum. Thanks also to the opening 30 mins it is believable that he would be able to construct the traps and gadgets he uses to battle the unnamed psycho

It should also be noted that unlike “Home Alone” the violence here isn’t slapstick nor is the intruding Santa some bumbling / near invincible buffoon but instead a dangerous and genuinely scary psychopath and to that end there is a real sense of realism I wasn’t expecting with this film. Still we do get some fun traps and gadgets being put together by Thomas such as a home-made crossbow which fires darts and a tracker he attaches via slingshot to the psycho’s back so that he is able to track his movements throughout the mansion while also providing a fun nod to “Alien” as the killer is constantly shown on the home-made scanner getting closer. The real standout moment though involves a booby trapped toy train which fails to go off when rolled towards the psycho who unwittingly rolls it back towards Thomas giving us this incredibly tense moment where we don’t know if he’s going to forced to abandon his hiding spot or not.

There is however one random moment where when cornered by the psycho, Thomas is randomly invited to partake in a game of hide and seek with the psycho going off to hide. I’m not sure if he thought this was the game they’d been playing all this time, or if its another of his attempts to play with children like we see at the start of the film when he attempts to join in a snowball fight with a group of kids on the street.

While the film being grounded in realism might seem that it might take away from the film, but instead it really brings a sense of tension to the film much like the sprawling mansion which the film is set in. It also means that by the end of the film we can see that Thomas much like his psycho tormentor have really been changed both mentally and physically by the events which have taken place over the course of the night and there was something in those final scenes of Thomas being reunited with his mother only to be shown on the inside that he has been deeply haunted by what he has to be endured and like his action heroes now forced to deal with the mental aftermath of surviving a situation like this compared to the Hollywood version where a hug from your mom makes things all better.

Unquestionably a film worth the hassle of hunting down as this breezy yet surprisingly tense thriller is an alt. Christmas classic sorely in need of an audience.
Posted by Elwood Jones at 15:55