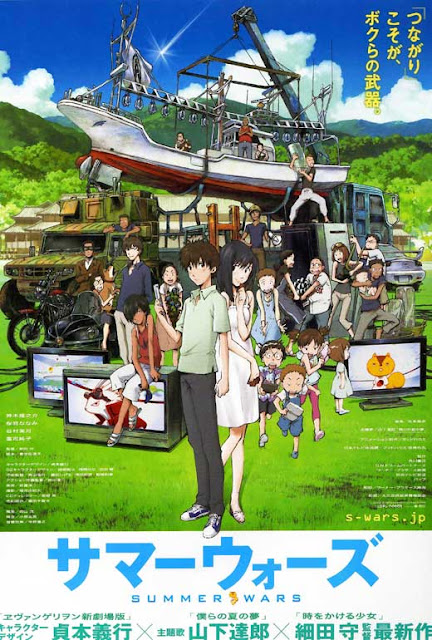 Plot: Kenji (Kamiki) is a high school student with a gift for mathematics who also works as a part-time moderator along with his best friend Takashi (Yokokawa) for the VR World OZ which has replaced the internet for worldwide conectivity. However when an AI called “Love Machine” hacks Kenji’s account her is drawn into a battle with the entity before it takes over OZ.

Review: Following on from the success of “The Girl Who Leapt Through Time” Director Mamoru Hosoda here once more returns to give another unique spin on a fantastical subject, having previously combined High School romance with time travel for his previous film, this time he combines elements of a family reunion drama with a tech fantasy.

While it might have been enough to set the film within the virtual world of Oz which is introduced at the start of the film as this sprawling network of information were users create unique avatars which they can then use to interact with other people to play games, socialise or even conduct business there really is no limit to what you can do, all the while watched over by its guardian whales John and Yoko. This of course provides the perfect area for Hosoda to conjurer up any fanatical idea he can think of. Needless to say its rather fitting as we become ever more dependent on living our lives on the net that Hosoda would craft this story which really questions if perhaps with a more fantastical edge what would happen if the network contracted a virus that took it all out.

The other element to the plot concerns Kenji being invited by his friend and fellow student Natsuki (Sakuraba) to her great-grandmother Sakae (Fuji) 90th birthday being held at her estate, were to his suprise he finds himself introduced to her family as her fiancé. This of course is the least of his worries though as its safe to say that Natsuki’s family are a colourful bunch to say the least as we soon get to discover aswell as how one of them is connected to Love Machine.

The world of OZ while essentially a white background with characters superimposed on the top so that they fly around the central structure of this world and yet its a world which perfectly works for this idea of a super information hub, especially once the battle against Love Machine starts as it becomes one which can be turned suddenly into any structure Hosoda needs and enables him to craft some truly exciting sequences such as showdown between Love Machine and Natsuki’s cousin Kazuma whose avatar King Kazma takes the form of a samurai rabbit.

While the majority of the film takes place in the virtual world we also get a sizeable portion spent with the oddball characters of Natsuki’s family who ultimately become key in beating Love Machine as they perhaps alittle to coincidently all come with either skills or access to resources that Kenji needs and leading to the slightly surreal scenes of a supercomputer suddenly being delivered let alone a ship being dumped in the koi pond to power it and yet somehow none of them are able to chase up a few fans to keep the computer cool leading to the ground instead filling the room with large blocks of ice, which seemed kind of strange considering everything else they’d put together on the fly.

Despite their usefulness the family group I felt could have benefited from losing a couple of members as while on one hand its amusing seeing Kenji trying to deal with this huge group while on the other we end up with several members feeling supplemental and underdeveloped. That being said they are still a colourful group of characters and help hold your interest when not in the virtual world. It can be assumed that the decision to have such a large family unit was derived from Hosoda’s own large family and this ends up just being one of those overly sentimental nods that just doesn’t quite play out.

The animation is unquestionably vibrant throughout with every character being animated it makes it only the more enjoyable to see what each character is doing on the screen, rather than just using looped animations that other productions might use for their background characters. The crispness of the animation is none the more clear than those in the virtual world which at times can feature hundreds of unique characters bringing back fond memories of “Paprika”. Again like our real world characters the avatars we encounter in this world come with their own personalities let alone distinct designs which of course only adds to the scenes when you have large groups on the screen. True a lot of these avatars are more simple designs than those belonging to main characters like Love Machine or Kazuma’s Samurai Rabbit avatar King Kazma.