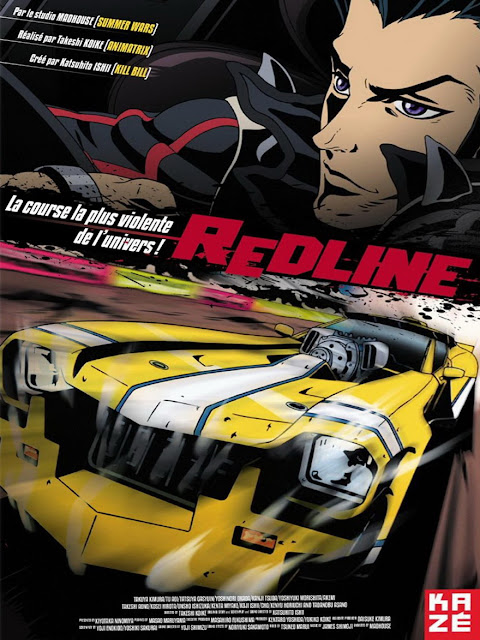 Plot: The Redline is one of the most popular races in the galaxy attracting some of the most dangerous and competitive racers who will do anything to win. At the same time with the race set to take place on Roboworld, a planet ruled by militant cyborgs whose President doesn’t take kindly to the race happening on the planet especially when it threatens to uncover secrets hidden beneath the planet surface.

Review: Originally planned to be released as one of four films released by Madhouse in 2009 alongside Summer Wars, Mai Mai Miracle and Yona Yona Penguin though delays saw it finally being released in 2010. This is of course not taking into account that the film already took seven years to complete the 100,000 hand-made drawings which make up the film.

The directorial debut for director Takeshi Koike who cut his teeth working as an animator on classic anime titles such as “Wicked City” and “Ninja Scroll” before getting his first chance to direct as part of “The Animatrix” were he directed the short “World Record” which also showcased a unique anime style which you can see served alongside his work as a Key Animator on the likes of “Dead Leaves” and “Afro Samurai” as test run for this film.

Using a hand drawn style compared to the preferred CGI assisted animation that most new anime titles favour this is a stunning film to look at as this constantly looks like a comic book page brought to life with each scene crammed with intricate details which serve to complement the colourful characters that this film is certainly in no shortage of. Heading up the racers is pompadour favouring JP (Seitz) who despite being blown up in his last race in the Yellowline his popularity sees him being voted into the Redline were his rival of sorts, the wonderfully named Sonoshee “Cherry Boy Hunter” McLaren (Ruff).

Racing against this duo we get a classic roster of oddballs and mutants such as cyborg and reigning champion Machinehead (McConnohie) whose body is also his own vehicle, bounty hunters Lynchman (White) and Johnny Boy (Roach), dirty cop Gori Rider (Cole) whose only entered to seek revenge on fellow racers and sibblings Miki (Regal) and Todoroki (Morris). This colourful cast of characters really is a great throwback to the sci-fi sports movies like “Arena” while Koike clearly is drawing inspiration from western comics like “Heavy Metal” and the British mainstay “2000 AD” which also gave the world “Judge Dread”. Another big inspiration especially with the scene construction appears to be the French artist Jean “Moebius” Giraud while at the same time Koike can equally be seen to be finding inspiration in the work of “Akira” creator Katsuhiro Otomo, “Dead Leaves” director Hiroyuki Imaishi whose frenzed animation style heavily influences the race sequences and Leiji Matsumoto with whom it would seem he shares a love of switches and dials as seen with the frequent shots that Koike includes of the vehicle interiors.

Playing out like a weird combination of “Wacky Races” meets “Aeon Flux” the film wastes little time in establishing its world as we open to the final stretch of the Yellowline race and even though it might not have the prestige of the Redline the competition is just a fierce with the competitors being shown unleashing rockets and various weapons on each other as they constantly push their quickly crumbling vehicles towards the finish line. Just within this opening sequence

The race sequences are unquestionably the selling point of the film as Koike favours a fast paced animation style which ignores the rules of physics let alone any kind of plausibility and even when the racing action threatens to slowdown you have the Roboworld military who turn out on mass to stop the race happening and this is not even without mentioning the bioweapon which gets unleashed in the middle of the race as here it is all about the spectacle and that’s something which he delivers by the truckload as this really is a unique experience that words really don’t do justice as this is a film which has to be experienced to fully appreciate it.

Thankfully the film doesn’t just rely on having a bunch of exciting action sequences and while the character development is minimal to say the least with most of the racers getting a brief background you still feel that you understand their motivations and characters. JP as the lead obviously gets a lot more attention as we see the relationship between him and his pit crew, though his relationship with Sonoshee feels alittle underdeveloped especially in terms of their past which is limited to a brief flashback of him sabotaging one of her early races.

While the film might be lacking depth in some areas such as characterisation there is no denying just how fun and frenzied it is which really helps to distract from such issues especially when its such an exillerating and exciting experience from start to finish, this is an anime which puts the pedal to the metal from the start and doesn't let up until the end credits so strap in and just enjoy the ride!
Posted by Elwood Jones at 12:53