Boxset Binge #8 - Wanna Be The Strongest In The World 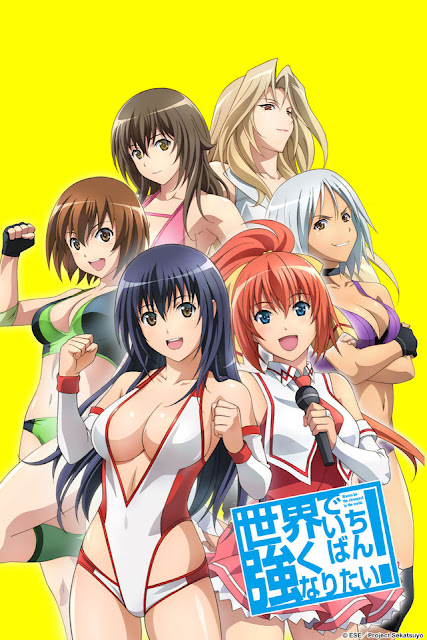 As of the time of writing we have just wrapped up another “Wrestlemania” which if your a wrestling fan is one of those events you wait all year for and with the WWE going all out to ramp up the spectacle its also one of the few shows even people who don’t usually watch wrestling the rest of the year will tune in for. With this in mins what better time to check out this wrestling anime.

Featuring one of the more random plot lines I’ve encountered as Haguwara Sakura a member of the girl / Idol group “Sweet Diva” decides to take revenge against the wrestler Rio who insulted her and her fellow idols by challenging her to a wrestling match. Arguably not the brightest of plans as she soon discovers herself with Rio easily beating her in their match. Now rather than just write off the whole experience Sakura instead decides to become a pro-wrestler and begins training with the all female wrestling company “Berserk” so that she can challenge Rio to a rematch.

Sakura is an instantly likeable lead for the series especially as she approaches everything with such a positive slant which really comes in handy for her especially when she spends the first half of the series being beaten down and forced to submit by every opponent she faces, with one of the commentators noting her losing streak of over 60 losses and yet somehow her devoted fans still continue to cheer her on, which lets face it regardless of if your the most lovable jobbler its hard to think that any audience is still going to be cheering for you when your rocking that kind of losing streak.

Entering into a gruelling training regime though Sakura is soon learning such valuable wrestling lessons as how to escape from submission holds and find a finishing move, all things that you would have thought that she would have figured out before stepping in the ring rather than seemingly just trying to wing it as a professional wrestler as seems to be her plan for the first half. Of course in the best sporting drama tradition by the time we are into the second half she is essentially a wrestling pro and able to defeat any of the grizzled pro’s who cross her path as the series build up to her matches against the world champion wrestler Jackal as well as the mysterious masked wrestler “Blue Panther”.

One of the strangest aspects of the show is how wrestling isn’t portrayed as a pre-determined contest but instead here is shown as an actual physical contest of fighting ability. Sure you still have to pin or make you opponent submit but seemingly no one is pulling any punches and also the reason that Sakura amasses such a losing streak as no sadist booker could really schedule her to loose that much. The actual wrestling though is exciting throughout the series though perhaps focusing a tad too much on submission moves which also serve to provide the majority of the fan service here.

Here in lies of the main issues with the series as the fan service here isn’t just the occasional panty shot but lingering crotch shots, while the competitors wrestle in the most flimsy of outfits which they constantly threaten (but never do) to spill out of. This combined with the whimpering cries of pain frequently coming from Sakura really can leave you feeling kind of sleazy watching the show, while I know just writing this now that I’m no doubt completely selling this to another sub-section of anime fan, but so is the nature of the beast when it comes to anime.

This is far from the deepest anime out there but at only 12 episodes and it certainly has its flaws such as the overwhelming and arguably unnecessary fan service but it still makes for an enjoyable filler between shows and especially if you can’t face another 112+ episode arc and while it might tease what the prospect of a second season at the time of writing one has yet to happen though personally I would certainly be down for a second round.
Posted by Elwood Jones at 05:32