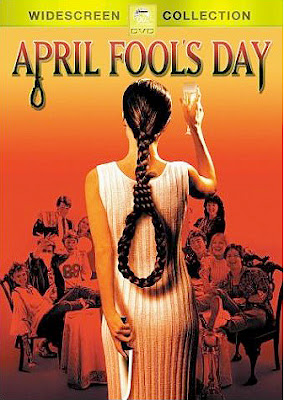 Plot: A group of nine college students staying at a friend's remote island mansion begin to fall victim to an unseen murderer over the April Fool's day weekend

Review: It seems that these days that most holidays have their own horror movie to accompany it which of course good examples of the horror market cashing in being for each holiday.

Even Thanksgiving has it’s own holiday horror film, thanks to Eli Roth’s fake trailer for “Grindhouse”, which if you happen to live outside of the states, the chances are that the only time you’ve had chance to see it, was via that great waste of time better known as You Tube

The 80’s horror scene was a real hotspot for these holiday themed horror films, with the hit rate for these being mainly sporadic at best, but still they continued to be churned out with “April Fools Day” just another entry in a long line of holiday cash ins.

Now seeing how we have just had April Fools day yesterday, I thought it would be fun to revisit the original rather than the 2008 remake, which has both its fans as well as it’s detractors with the focal point for both camps being around “That ending” which is somthing that I will come back to later.
So having gathered for a party being thrown by Muffy St. John ( Foreman ) on her remote island mansion which she has just inherited the students are your usual mix of pranksters, sluts and jocks, who despite claiming to be friends act like they hardly know each other while all being completely unlikeable from the start, which is worrying seeing how it stops you from actually caring whatever fate is set to befall our party goers. Still that fate is dragged out quite awhile seeing how the first murder doesn’t happen till around the thirty minute mark, by which point we have seen someone get crushed against a dock and a fake stabbing, but little else bar some minor character development as each of the characters has pranks played on them, as after all this is April fools (ho, ho, ho).

The murders are all carried off screen bar the dock crushing which is really a false indication of what is to come, but this is not something I’m going to gripe about, as honestly I didn’t feel that I was being cheated, with these scenes being shot quite well, unlike other parts of the film, were it was impossible to see what was happening, these off screen deaths which is hardly the easiest thing to pull off, as numerous recent horror films can testify to, often with these failures backed up with winey excuses from the director, as to how they always found it scarier when you didn’t see the murders, which something that was a major downfall for the “Resident Evil” movies and their habit of cutting away just when you felt you were going to see something good, which thankfully is not the case here, as not showing the death still feels justified. However I did feel that tension was traded off too easily, by bumping off several characters suddenly at the end, after a huge gap between those murders and the last, quickly whittling the cast down to our token couple, almost as if director Walton suddenly remembered that he was supposed to be making a horror film and not a teen drama, which is more what it felt like at times, with several of the cast far too relaxed in their actions despite their being some killer, bumping off their friends. A great example of this being the scene were Harvey (our token Texan it would seem) (Baker) and Nikki (Goodrich) are getting water from the well, in which we get to hear one of the greatest lines of dialogue and no doubt one of the worst chat up lines, worthy enough to rival that oh so memorable one from “Shark Attack 3” when Harvey says

“Because I would really like to plow your field.”

Seriously this passes for a chat up line, especially seeing how unfazed Nikki seems by it! Even more humorous when you consider that he has just spent the better part of the movie, trying to convince everyone that he’s not a hick.

Still I really can not write about the characters in this film, without mentioning Muffy, who despite clearly having parents who didn’t like her that much, especially when you consider the name that they gave her, I mean seriously what sort of a name is Muffy anyway? (Apologies if you happen to be called Muffy as well. I’m sure your parents don’t hate you) For the first half she’s happy prankster, but then as soon as one murder happens she suddenly changes character completely, withdrawing in herself and only mumbling a few words to the other characters, something that I guess director Walton tries to cover for with a last minute plot point, when an evil twin “Buffy” is mentioned briefly, but despite this multiple personality she seems to process, she doesn’t seem to be friends with any of the party goers like it is claimed.

So I guess this now brings me to what is the subject of much dispute, amongst the horror fans and that is the ending, even though it’s a horribly kept secret, I won’t ruin for you here, but needless to say many consider it a cheat, much like the ending of “Friday the 13th Part 5” where all through the movie, we think we are getting Jason only for it not to be Jason, which its fair to say upset a lot of the fanboys and girls, but something that I was still happy to except as an ending, much like the ending of this film, which is clever but still doesn’t feel worth it after having sat through the movie, which is in parts quite painful to sit through, as nothing really happens to keep your attention and with the tension being like I said earlier firmly in the non existent category it is hard to stay with this film till the end, with your attention no doubt being drawn else where through out, to the point that you will no doubt not bother stopping the film, so you can go to the bathroom or take a trip to the fridge for a snack or whatever. Still it’s this ending which has kept the film in the fan boy conscious since it’s original release and it does help it stand out in a way, from the numerous other horror films of 80’s, but if you expect this to be some lost classic, you might very well find that the joke is on you.
Posted by Elwood Jones at 05:40

Email ThisBlogThis!Share to TwitterShare to FacebookShare to Pinterest
Labels: Slasher