Rating: 3/ 5
Plot: Peter (Hargreaves) and Marcia (Behets) decide to go camping for the weekend, at a remote beach in an attempt to save their marriage, only to find that nature isn’t in an accommodating mood

Review: Long weekend is a strange movie, not only because of it’s plot content, but mainly because even after the title credits have rolled your still not quite sure, what you have just watched, an experience that I havn't really found outside of the films of David Lynch and Shinya Tsukamoto with Gregg Araki’s “Nowhere” (1997) being the only film watching experience, that I can compare to that of watching Long Weekend, which really doesn’t help, as I sit here trying to provide you all with some form of critic on this film….oh well here goes.
As I said Long Weekend is certainly a strange movie, if not one of the few movies that falls into the genre of “Humans invading the animal sphere” (to quote Jenn, whose blog “Cavalcade of Perversions” is always worth a look) which again is unusual as it see’s us humans as the aggressors rather than a member of the animal kingdom doing the terrorising, which honestly was kind of a new one for me and not something I’d seen before and here it is used to great effect without spilling over into the usual camp horror which the creature feature genre usually comes with, as Peter and Marcia come under attack from pretty much anything that mother nature can muster to throw at them.
The relationship between Peter and Marcia is an interesting one to watch, especially seeing how they pretty much despise each other as they, bitch and moan at each other over the course of what will be a very long weekend. One of the first warning signs of their relationship, is when we see Peter sighting the scope on his rifle while using Marcia as the intended target, which is even before the first argument has even started and kind of says all sorts of things about their relationship, whose dark secrets are slowly revealed throughout the course of the film, as we start to understand why they are the way they are to each other, which might fill you with some sort of sympathy, but lets not forget this film is part of the Ozploitation genre, which means that nothing is ever straightforward, for it seems that not content with bitching at each other, these two are also a real danger to the environment around them, as Peter runs over a kangaroo and refuses to stop aswell as spending pretty much all of his time failing to cut down the surrounding forest and shooting his rifle at the local wildlife, as he plays at being a wilderness expert / cowboy, having spent their holiday budget on all this expensive camping equipment, he constantly reassures himself that he knows what he is doing like some kind of wilderness expert, while meanwhile Marcia shows an equal dislike for anything resembling nature, that interferes with her personal comfort zone, using this as further ammunition against Peter, as she refuses his sexual advances and constantly states how they could have spent the money on a nice hotel, rather than being forced to rough it like this, which doesn’t just make them unlikeable to the audience, but hoping that they are going to get slaughtered. 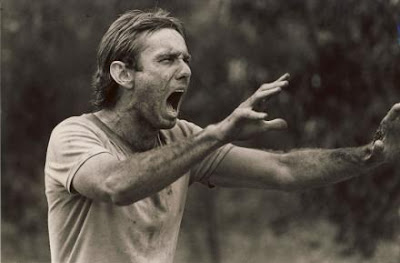 Meanwhile while we are watching this couple on their rampage through nature, nature is slowly beginning to muster it's forces and strike back, with these first strikes coming subtly at first, with Ants invading their camp site and the couple hearing strange noises coming from the woods, but as the film progresses, these attacks become more aggressive and obvious, while at the same time both Peter and Marcia’s sanity is being stretched more and more thin, making them unsure whether it is nature that is striking back or whether it is all in their minds and it’s these mind games that Director Eggleston enjoys playing mindgames throughout, from the camerawork, which often lurks amongst the bushes, watches on like a lurker and taking the time to film the picturesque settings, someone gaining tension from even the simplest of locations throughout and even giving nature a voice in several scenes, including having the ants screaming in pain when Marcia pours insecticide on them, as well as having a supposedly dead manatee, which Peter shoots earlier in the film, after Marcia mistakes it for a shark, slowly crawling up the beach despite being buried (if admittedly quite half assed) by Peter when it’s body washes up on the beach, with these mind games only intensifying as the film reaches it’s shocking climax, while still maintaining the aura of mystery as to what is really happening and never once feeling the need to explain what is happening, preferring instead to leave it up to the audience to figure things out for themselves.

Long Weekend is certainly a film stripped down to the bare necessities, with no special effects, a minimally intrusive soundtrack and never once going to cheap scares to keep it’s audience, it truly is a film driven by its two leads, as unlikable as they are, we are still tied to them through this whole experience and it’s with a mere curiosity to what will happen to them, or finding out the next dark secret, which they are desperately trying to hide, that keeps you drawn into the story. Ironically these same things are also which make the film less easy to get into for horror fans, which prefer something more visual and it’s these fans which are going to find this film hard to stick with, but for those of us who like a little mystery with their films, then they will no doubt find something to enjoy here.

For a film which is generally not so well known, it has lead to a shot for shot remake, bringing back memories of Gus Van Sant’s 1998 remake of “Psycho”, though at present it seems to be also below the radar at present, being found purely on the festival circuit as it struggles to find some for of mainstream release. In the meantime this original version is at the least worth the price of a rental, even if it won’t be for everyone, it is still a highly original film of what I’m sure is a very lonely genre.
Posted by Elwood Jones at 10:19