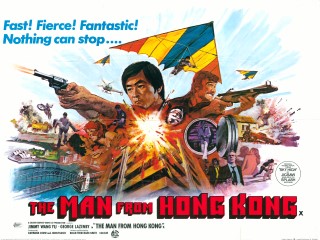 Rating: 4/ 5
Plot: When a Hong Kong drug courier (Hung) is arrested in by undercover Australian police, they call in Inspector Fang Sing Leng (Yu) only for him to discover a link between the Hong Kong and Australian drug trade, being orchestrated by Australian Gangster Jack Wilton (Lazenby).

Review: Someone once wrote that, if you put a dozen monkeys in a room with a dozen typewriters, that they will eventually write Shakespeare. Okay I'm not too sure were they got that idea from, but I suppose the same could be said for this film, seeing how it’s a combined effort of some of the film industries prime crazies with Brian Trenchard-Smith, Jimmy Wang Yu and Grant Page all working on film, it could easily have turned out horrible, which thankfully it didn’t, seeing how it’s the first Australian Kung Fu movie, it really is really quite watchable.
“The Man From Hong Kong” or “The Dragon Files” as it’s occasionally found as stateside is a strange film at best and not only due to the fact, that it is a Kung Fu movie set in Australia, but because it falls somewhere between being a “Dirty Harry” and “James Bond”, combining all the seduction, chases and explosions of the latter, while Inspector Leng’s style of detective work is more in tune with that of the former’s Inspector Harry Callahan, while also throwing in a heavy dollop of Kung Fu, though at the same time still providing an interesting enough storyline, which unlike numerous other films in the Kung Fu genre isn’t just filler between fight scenes.
The character of Detective Leng, I found myself frequently wanting to compare to that of Detective Azuma in “Violent Cop” (1989) who was played so memorably by Takeshi Kitano and whose character like Leng, shares the belief that the best method of integration is to basically, beat the hell out of the suspect, until you get the information you need, or shud you happen to kill them, that the contents of thier wallet will tell you everything you want to know, which is basically what he spends the majority of the time doing, with this unique (and apparantly legal ) style of detective work providing a great confrontation scene early on, when Leng interrogates the drug runner played by Sammo Hung, in a surprisingly small role especially seeing how like Jimmy Wang Yu, he’d already appeared in numerous martial arts films before making this one, but despite his appearance being so brief it is still nice to see an early performance, though he is certainly a lot thinner than he is in later films, which means that he’s not so instantly recognisable with out his trademark girth. 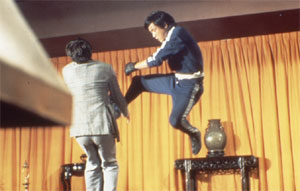 The fight sequences throughout are all full of bone crunching action, from the first fight sequence on Ayres Rock (Just one of several landmark, which make an apperence throughout) and Wilton’s dojo to the final showdown between Leng and main bad guy Jack Wilton, with none of these scenes having the feeling of reputition, as Sammo Hung and Hung Kan Po in his sole martial arts choreography credit, really set out to showcase the abilities of Jimmy Wang Yu, using both weapons and hand to hand combat and whose fighting style comes across as being extremely fluid, even when fighting against actors, dafted in to play various thugs, one of which being played by director Trenchard-Smith whose Thug character manages to receive a particularly brutal beating, which would later turn out, was him actually getting battered, seeing how Jimmy Wang Yu wasn’t throwing punches, instead actually connecting with all of his blows, which does add a certain element of realism to the film, with a similar style of screen fighting later being seen in “Eastern Condors” (1987) which also had actors connecting with their blows and kicks, though with this film, it was probably not so intended and more down to Jimmy Wang Yu, who by all accounts was not the easiest person to work with, being generally disliked by the crew and constantly battling Trenchard-Smith for directorial control of the film, who he felt was inexperienced, especially considering that this was only Trenchard-Smith’s second film. He also had a strong dislike of Western women, especially actresses which possibly isn’t the best thing, when he is playing a character which shares several characteristics with James Bond, especially when it comes to the ladies, who despite being devoid of any form of charisma, doesn’t seem to have much problem picking up the ladies. However with Wang Yu’s views on women, he would often pick flies from the air and eat them, during these romance scenes. Still despite the lack of charisma on Jimmy Wang Yu’s part, thankfully George Lanzenby manages to provide enough charisma to go around, having only signed on for the film after having been pretty much blacklisted at this point in his career, having failed to take over the Bond role from Sean Connery in the lacklustre “On Her Majesties Secret Service” making him personally my sixth favourite bond, though he more than redeems himself here as the Gangster Jack Wilton and had he been this good as Bond I would have probably liked him a lot more, as here he plays the character with an air of constant cool and calm, never allowing himself to be fazed by Inspector Leng’s investigation, while also processing equal martial arts skills as those used by Leng, which makes the final showdown, even more exciting to watch, even though it is kind of questionable that he only has one henchman to protect his penthouse hideout.
The Man From Hong Kong could easily, have just been a great Kung Fu movie, but seeing how this is an Aussie movie, it also means that we also get some great car smash action, which when you consider the legacy of great car smash movies, that the country has produced in the past, it is great that this film has several scenes which easily meet with those high standards one of which is at the start of the film, intercut with shots of the first of the big fight scenes, ending with the car rolling over and exploding and the door flying off in the direction of the camera and only just missing and with the other standout chase coming near the end of the film, as cars are drove off the road and through houses, all without the use of CGI, which only makes them all the more exciting to know that what your watching is actually happening, with credit especially going to Grant Page, who it could be said is just as insane as the directors, allowing himself to get kicked off motorcycles and generally get the living hell beaten out of him.
Still outside of the great fights and chase sequences, I am still left with a few grumbles with the main one being Detectives Gross and Taylor played here by Hugh Keays-Byrne & Roger Ward, who are humorous enough in the scenes which they appear, especially the Xenophobic Detective Taylor, but they are neglected to the background far too soon and go from working with Leng, to basically just trailing his path of destruction and occasionally producing a witty remark.

The Man From Hong Kong, could all to easily have been a movie that didn’t work, especially when you consider, just how insane the idea of an Aussie Kung Fu movie is, to begin with let alone the people who made it, but despite this it still makes for an enjoyable kung fu film, that fans of the genre and trash cinema will adore for all it’s randomness, as it flicks between genres letting the audience decide for themselves what sort of movie it is supposed to be, as I still don’t know whether it was going down the route of being a more brutal version of Jackie Chan’s “Police story” (1985) or if it’s trying to make Jimmy Wang Yu, the Asian James Bond? I’m still not quite sure, but I know that if anything it has the one of the most catchy theme songs ever with “Sky High” by Jigsaw, which like “The Bermuda Depths” (1978) achieved with “Jennie” by Claude Carmichael and giving me yet another song which will no doubt be stuck in my head for the next week or so.