Continuing the fun of “Raimifest” currently being held over at “Things That Don’t Suck”, the fantastic blog run by my critiquing hombre Bryce, so why not check out it out the fun currently happening over there and soak up some of the Raimi goodness! 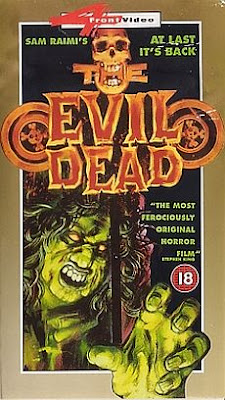 Plot: Five friends head to a cabin in the woods, were they find a copy of an ancient book detailing demonic possession and ceremonies. As well as the book they also find a tape recording translation of the book, which unknown to them releases a dark evil in the woods.

Review: Okay let me start by saying that I was never a fan of this film, having only really watched it once before and since then hadn’t really felt any kind of urge to revisit it since that original viewing, but seeing how we are in the midst of “Raimifest” I could think of no better excuse to revisit this film, after all my childhood memory is still imprinted with the original VHS artwork, which taunted me from the shelves of the local video rental and even though I never felt any urge to watch it, it still held a strange power over me, which could have been down to the lack of any kind of screenshot on the back or just the eerie green colouring of the zombie like creature on the front cover, whatever it was there was something about it which stuck with me.

Originally titled “The Book of the Dead” only for producer Irvan Shapiro to oppose the title, believing that audiences would expect to have to read, Raimi instead changed the name to “The Evil Dead” or “The Evil Dead, The Ultimate Experience In Gruelling Horror” to give the film it’s full title and it is certainly a film with a chequered past being one of the first films to make the notorious “Video Nasties” list and being frequently used by media moralist Mary Whitehouse, as an example of a video nasty in court, though ironically the version she used was not the uncut version but instead the cut version of the film, which had been passed for certification by the BBFC, were it had recived an X rating. The film would be frequently added and removed from the list before finally receiving its full uncut release in 2001 ironically on the same year that Whitehouse passed away.

Biding it’s time the film starts off quite typically with our fresh faced teens heading to their rented cabin in the woods and despite a few warning signs that something is nice quite right, be it the strange unseen presence moving quickly though the woods or the porch bench banging against the side of the cabin suddenly stopping, the group certainly have no idea of the night they have ahead of them, much like the viewer, for so far this is all a pretty traditional horror setup. Still Raimi clearly knows this seeing how he goes from this handful of setup moments, to his first big scare of the film aswell as the most controversial as Ash’s sister Cheryl is raped by the surrounding trees, which would also be the one scene which Raimi would later admit to regretting it’s inclusion in the final cut of the film and while it provides a shocking wake up call for the audience, it still is one of the few moments were the film perhaps takes things a little too far. Still from this moment onwards the film becomes a non stop ride into madness and sheer terror, which never lets up until the closing credits, which are equally haunting as the jolly and slightly out of place jazz music slowly grinds to a crawl before fading out completly, providing the viewer with no reprive while it still has command of the screen.

“Fellas, no matter what you do, keep the blood running down the screen”

Well it’s safe to say that Raimi manages to follow this advice almost religiously as not only is this possibly the most bloody film ever made, with possibly only Peter Jackson’s “Brain Dead” (1992) coming close to beating it, but nearly any possible bodily fluid is thrown at the screen, along with the various amputations, stabbings and beatings which happen throughout, as he builds to his epic finale in which bodies explode in epic meltdowns of stop motion animation, old school effects and something which strangely resembles pie filler, with Campbell being on the receiving end of the majority of the punishment being handed out, which could be down largely to the fact that Campbell was the only actor to stay with the production throughout, with the rest of the cast having scenes completed using stand in’s or “Fake Shemps” as they were branded, though Raimi seems to be personally setting out to torture him throughout the film, something which he would continue through to the sequels in which he seemed to constantly be finding new tortures for his long term friend and actor of choice. The use of “Fake Shemps” could also be seen as Raimi’s ongoing obsession with “The Three Stooges”, one of several reoccurring themes and icons which have appeared in nearly all his films, with these icons including Chainsaws and the now famous Oldsmobile, all of which made their debut here. With this feature length debut Raimi clearly is building on the foundations he lay with “Within The Woods” (1978), which he also used to raise the funds for this film, which in turn could now be seen as the testing ground for “Evil Dead 2” (1987) which is essentially a big budget remake, taking what worked here and fine tuning it for a bigger kick, which would explain the evolution of Ash to his more recognisable Wise cracking deadite slaying persona, aswell as the Chainsaw actually being used, rather than just playing the tease as he does here. Still there would still remain one aspect of this film, which Raimi would never be able replicate in the sequels and this is the sheer creepiness of Betsy Baker, thanks to a combination of milky white contacts and a Cheshire cat grin, which still haunts me like the turtle scene in “Cannibal Holocaust” (1980). Baker apparently still likes to dig out the contacts on Halloween and scare the hell out of the local kids, which I have to admit is pretty cool, though here when that smile and those wide eyes are combined with her insane ramblings it’s chilling.

While “The Evil Dead” might not be my favourite film in Raimi’s back catalogue, there is no denying it’s influence, especially seeing how it would go on to spawn not only it’s two sequels, but computer games, a musical as well as a popular comic spin off, while finding a whole new host of rabid fans, with every new generation of horror fans who discover it for the first time and while I would have preferred to have just ended the film with Ash walking away, rather than going for the final scare, but despite my qualms with the film it still remains almost a textbook example of how effective DIY horror can be when done well. Now if I could only just figure out why Raimi choose to have them drinking Moonshine of all things.
Posted by Elwood Jones at 15:56