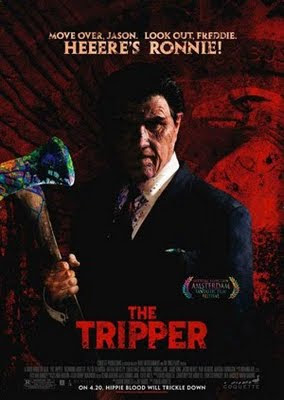 Plot: Samantha (King) is on the run from her abusive ex boyfriend Jimmy (Getty), heading off with her pothead friends and hoping to enjoy a carefree weekend at the Woodstock esq “American Free Love Festival” deep in the woods, unaware that these woods are home to deranged and Ronald Regan obsessed psychopath (Nelson).


Review: I do wonder what it is that makes the most awful horror film successful, as can be seen with the fact that we are now up to the sixth instalment of the “Saw” franchise, long after the limited plot potential was highlighted with first sequel, meanwhile true homage’s to the gory classics of the 70’s & 80’s like this one, which bother to try and bring some fun and excitment back into the horror genre, for some reason or another seem to fall by the wayside. Still if anyone was going to give it to us, I’m glad that it was the Actor & One Time WCW Champion turned Director David Arquette, for he has for myself atleast always had a sense of fun to his work and I knew from the interviews he gave during the promotional tour for this film, that he had made something special, for here wasn’t just some director reeling of a list of popular and establish classics for his influences, but a true horror fan clear setting out, with the clear intention of having a blast with the genre and perhaps attempting make the genere as awhole feel alittle less safe, than it had become back then with the popularity certainly at the time leaning towards more subtle horror than graphic violence, despite the occastional rogue film such as “Cabin Fever” attempting to buck the trend, with this intention pretty much being screamed from the majority of promotional shots in particular the real selling point of this movie, which is the chainsaw to the throat which appears within the first ten minutes, with Arquette only building on things from that moment onwards.

The two clear influences for the film seem to have been “The Burning” and more obviously the “Friday The 13th” series, with both getting subtle homage’s throughout, without Arquette feeling the need to billboard these references, by going “Hey look I’ve got the killer silloutted in direct sunlight, same as in “The Burning”!!!” while at the same time attempting to create something the audience hasn’t seen before, with the gore for the most part getting creative, as he chooses to hide nothing and also use old school effects over CGI making the end result only the more affective, especially when watching things like the aforementioned chainsaw to the throat. The majority of the kills are pretty straightforward, with this Regan alike proving himself more than alittle handy with an axe as heads start to roll with Arquette working towards his chop happy finale which helps push the film easily into the double figures.

The other main trademark of old school horror on show here is the gratuitous nudity, which covers both sexes (so something for everyone to enjoy), both shown in unflinching full frontal which probably wasn’t the best choice for the naked guy hippy, who clearly enjoyed working with the naked hippy chick alittle too much, which for some reason slipped past the censors, who tend to frown pretty heavily on anything resembling male arousal usually, with the general rule being that you can show a penis but god help you if your planning on showing an aroused one!
The cast are pretty much underground with the only a couple notable stars with the most noticeable for most folks being Jason Mews, who would also be another unknown on the cast list, had it not been for Kevin Smith, making him so memorable as Jay in his Askew View saga and here he’s not really exactly branching out as the Hippy stoner Joey, which essentially is just Jay in another guise. The same can also be said for Director Arquette, who once again puts in another oddball performance as one of a group of tormenting rednecks, while fulfilling the need for rednecks in any horror which has a woodland setting, a trend which he chooses not to buck here. Still Thomas Jane spends a lot of time chewing the scenery as Buzz, the local cop determined to get to the bottom of things, while holding a certain distain for the city folks flooding in for the festival and is certainly one of the main highlights here.

The main problem I had with “The Tripper” is with the pacing as after strong opening which features one of the best kills of the film, it takes quite awhile till we get the next one. Meanwhile the psycho ex-boyfriend plotline feels too much like filler and serves no purpose beside providing a questionable at best red herring. I know already that there will be the more jaded viewer who will question the lack of real scares on offer here, but essentially this is slasher and scares have never truly been a top priority for this sub genre of Horror, with the priority usually with finding new and ever more graphic ways of killing off members of the cast and it’s clear throughout that Arquette knows the horror genre well and I would love to see him try and make somthing alittle more scarier for his next effort, especially as Arquette's plan for a sequel set at "The Burning Man Festival", were scrapped after this film under performed, leaving Arquette's plan's for "The Tripper 2: Burning Bush" as nothing but a fun prospect of what could have been. Still his knowlege and clear love for the Horror genre does help make it all the more of treat when viewed as the popcorn horror flick that it is and as such best enjoyed with a group of liked minded friends and a bucket of ice cold corona!
Posted by Elwood Jones at 13:04