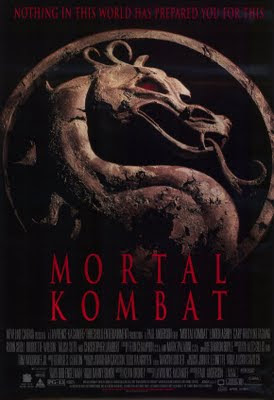 Plot: Once every generation, there is an interdimensional martial arts tournament held, known simply as Mortal Kombat and designed to limit invasions between the realms. Having won the last nine tournaments, the realm of Outworld and now only need to win one more tournament to allow it’s Emperor Shao Kahn to invade and conquer Earth Realm. Now Shaolin warrior Liu Kang (Shou) seeking revenge against the tournament host Shang Tsung (Tagawa) for the death of his brother, joins the other fighters picked by Raiden (Lambert) The God of Thunder to face against Shao Kahn and the warriors of Outworld in a last bid attempt to save Earth.


Review: Regular readers of the blog will probably know already of my love for the “Mortal Kombat” series and it seemed about time that I actually reviewed the film I consider to be my ultimate guilty pleasure.

Video Game adaptations have in the past (with usually good reason) been frequently greeted with much critical distain and despite Uwe Boll having spent the majority of his career making a vast number of the horrible adaptations there have been to date, which only makes this all the more special let alone the fact that it broke the chain of bad video game adaptations when it was released after the legendry flops “Super Mario Bros.” (1993) and “Street Fighter” (1994) the later of which Jean Claude Van Damme ironically choose to do instead of this film, which unlike those two is awesome! Were this film succeeds were the others failed, is by Director Anderson taking the key ideas from the game and giving them his own twist in almost the same way that was attempted with “Mortal Kombat: Rebirth” only Anderson is instead applying those same ideas to a traditional Kung Fu format, while keeping the more fantastical elements to a minimum while still finding a way to make such trademark elements such as the fantastical fighting styles of the outworld fighters like Scorpion and Sub Zero

The other strength here is by limiting the characters to those from the first game, while other video game tie in’s got bogged down with trying to work in everyone’s favourite characters, something especially memorable from the mess which “Street Fighter” became by trying to include every single character and while “Mortal Kombat” throws in several original creations such as Art Lean (Edwards), while the tournament setting allows for these characters to be introduced and serve their purpose before being handily disposed of. Infact the format perhaps works alittle too well seeing how after the first quarter when the Trio of Liu Kang, Movie star Johnny Cage (Ashby) and Sonya Blade (Wilson) arrive on the island, it is essentially fighting from that moment on with little or no break between each sequence, but this what we as fans want to see, rather than clumsy attempts to add depths to what are at their best, as much as we want to deny it are little more than paper thin caricatures, which is fine for the purpose they serve in the video game world and it’s because of this same reason that other attempts to adapt games frequently fail, as directors try to either stick too close to the source material or take it too far from this material so that it alienates even the most hardcore of the fanbase. Anderson would later take his skill of adaptation to the “Resident Evil” franchise eventually taking it in a completly new direction than the games, forming a franchise which currently shows no signs of slowing down, as seen by the success of the recent forth entry in the series “Resident Evil: Apocalypse”, despite the film not exactly bringing much to the Zombie genre they frequently emulate, other than a series of entry level zombie movies, before their fans move onto the more legendry films of George Romero and in way the same thing could be said for “Mortal Kombat” which is almost like an entry level movie for the Kung Fu genre, aswell as a thinly veiled adaptation of “Enter the Dragon” only with the added bonuses of multi armed mutants and soul stealing sorcerers.

The action scenes are all handled well with even the non martial art trained amongst the cast, such as Ashby and Wilson both coming across as convincing martial artists, with the majority of them being handled by Shou, who surprisingly would fall off the radar after this film, which only makes it more of a shame he wasn’t seen in similar roles, with his star pretty much dropping after this films release. All the fighters show off their trademark moves with some such as Scorpions spear and Johnny Cage’s package punch are all accounted for, while Goro is pretty much a perfect adaptation from his video game persona and only benefits further from being an animatronics creation, especially when you look at the seriously dated CGI used to create Reptile, which I remember being alot more impressive the first time I saw this film, but then the same could also be said for “The Lawnmower Man” (1992). Still unlike the CGI the techno heavy soundtrack still kicks ass, with the opening theme perfectly setting the tone for the fun which follows.

The big surprise here is the lack of gore, especially seeing how the Mortal Kombat series are some of the most violent fighting games ever made and while I wasn’t expecting to see Sub Zero performing his fatality of tearing off an opponents head and spinal cord, it is still a tricky game to adapt faithfully enough to stay in tune with what fans have come to expect from the series. Still it does manage to throw in a few surprises in this stake, much like the surprise appearance of the games memorable “Pit” stage and the gory demise of Reptile but its still all fun times even without the gory extremes of the game, but then Anderson it’s also worth remembering is the same director who gave us a gore free zombie movie (See: Resident Evil).

As much as other critics have blasted this flick in the past, frequently trying to lump it in with Street Fighter and while admittedly the humour can seem alitle forced in places and it’s sequel “Mortal Kombat: Annihilation” is utter garbage, this still remains a great film. Even now as I try to look at it through a more critical viewpoint, rather than the rose tinted glasses of childhood nostalgia and it did also spawn “Mortal Kombat: Conquest” a great TV show which is still in need of a decent DVD release and while the intregring “Mortal Kombat: Rebirth” has now sadly drifted away from its intriguing “Dark Knight” style reimagining into more familiar territory after being turned into "Mortal Kombat: Legacy", proving once more that studio exec’s really don’t know shit.