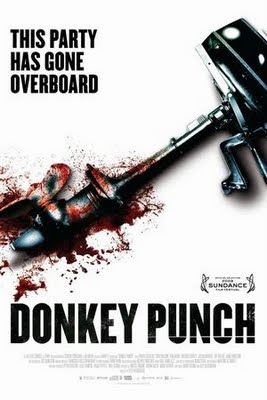 Plot: Lisa (Breckin), Kim (Winstone) and Tammi (Burley) are three friends on holiday in Mallorca, helping Kim get over a recent break up. A chance encounter with four young men, who in turn invite them back to their yacht to party. Once they get out to sea, a combination of drink, drugs and casual sex, lead to one of the girls being killed by a risqué sex act called the “Donkey Punch”. In the ensuing panic the boys quickly plot to cover up the event, as the surviving girls now find themselves fighting for survival.

Review: Film4 has in the past been responsible for producing some great films in the past few years including “Series 7: The Contenders” (2001), Buffalo Soldiers (2001) and “Shaun of the Dead” (2004), this however is not one of those films.

Plot wise it's one that is far from original and one we have seen more than a few times before and certainly handled better than it is here, were a group find themselves in a tricky situation which only gets worse the more they attempt to get themselves out of it, usually because of bad choices and questionable morality. Here once more those same things are all present only with Director Blackburn attempting to give proceedings a Larry Clarke esq twist, by including gratuitous sex, drugs and nudity only without none of the improvised indie charm which Clarke brings to his films, as Blackburn attempts to build a film on the controversy of death by sexual misadventure, via the titular “Donkey Punch” a risqué sex move involving punching a girl in the back of the neck prior to ejaculation (don’t ask me how people come up with these things) to maximise male pleasure.

It takes record time for the film to setup it’s premise as we are barely fifteen minutes into the film, before the girls are convinced into joining the boys they have just met on a private yacht, were they have been crewing and currently left to look after for the owner and even less time before the girls are busy popping pills and smoking crack with these same guys who they have just met, while Lisa and Tammi are even sooner demonstrating just how loose their personal morals are in a group sex session, which in turn leads to the trigger point of the groups troubles. Now normally from this point you’d expect things to speedily escalate, especially with the guys being worryingly quick in their plotting to cover things up, in a bid to save their personal reputations, while bizarrely confident that they can convince Tammi and Kim to go along with their story, after all they did only just kill their best friend but what hell right? Well from this point things tend to go the opposite way, with the speedy escalation of issues not happening as the film proceeds to grind almost to a halt as Blackburn seems to be almost trying to convince the audience that the girls might possibly go along with such a random plan. Thankfully things get back on track with the girls trying to escape from the increasingly psychotic guys, who in turn begin to fall out between themselves as each begins to question the motives of the other, but even after their first attempt to escape the girls still sit down to a meal with their now captives, rather than attempting to plot another escape plan, while the cover up plan only continues to grow all the more ludicrous the longer the film goes on.

None of the characters are particularly likable with the guys all being for the most part indistinguishable from each other, with the only exception being the knuckle dragging buffoon Bluey (Burke) who is largely responsible for one of the guys attempting to follow up on his boasts of performing the “Donkey Punch”, played here by Tom Burke who is clearly a graduate of the Danny Dyer school of acting, as he mumbles his way through the film and irritated the hell out of me every time he appeared on the screen, to point were his death really could not come quick enough. The rest of the cast outside of Jaime Winstone (Daughter of Ray “The Daddy” Winstone) are all unknowns, though it is hard to say if this is the reason for the performances being so bland or just the lack of characterisation which the script gives them, which seemingly only extends to their libidos and general self preservation.

The soundtrack is honestly one of the most boring things I have heard in awhile and comprises of either chic indie bands, popular dance tracks or the questionable score by François Eudes, who aims for a soundtrack similar to John Carpenters “Halloween Theme”, with a similar repeating rift, only this one goes nowhere and sounds like the cd has got stuck, rather than adding anything to the already minimal tension.

Gore wise things are surprisingly light, especially when Blackburn seems to be quite happy to be as explicit as possibly when it comes to sex and drugs, but seemingly onscreen violence is were he draws the line, with most of the deaths fails to have their money shot, in particular the highly original deaths by flare and outboard motor, both of which fall painfully flat here, especially with the later having no real pay off, especially for the death which was highlighted so frequently in the promotion materials for the film. Still seeing how the film budget didn’t apparently stretch to lighting it makes it pretty hard to see what is going on half the time

“Donkey Punch” is a heavily flawed film, suffering from major flaws such as uninteresting and indistinguishable characterization as well as some truly horrible pacing throughout which only makes what is a relatively short run time an incredibly tedious experience to sit through as despite the curious title, this film is seriously lacking any kind of punch.
Posted by Elwood Jones at 13:23