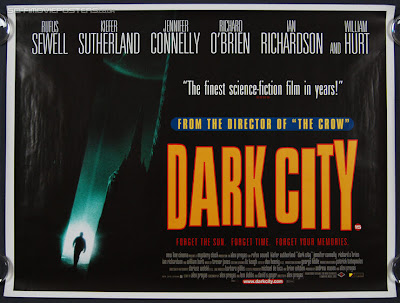 Plot: John (Sewell) wakes up naked in a hotel bathtub, his memories erased and a mutilated prostitute on the bed. Soon John finds himself framed for a string of brutal and bizarre murders and on the run from not only the police, but also the strange trench coat clad men known only as “The Strangers” as he tries to piece together his missing memories.

Review: For some reason Alex Proyas seems to constantly be just below the public conscious, which is only all the more strange when you consider the fact that he is not making cult or indie films, but mainly big budget mainstream productions, despite some of these films such as “The Crow” and this film later gaining cult status, despite never intentionally being made for such an audience. Still despite his success he still remains largely under the radar, with his films being better known than the man calling the shots, meaning that frequently little comparison is drawn between his films.

Okay before I go any further, this is a film which I would recommend going into blind, to make the most of it’s highly surreal atmosphere and clever plotting which takes the viewer on a gripping ride through the kafka-esq world which Proyas has crafted with this film which blends elements of Noir with shade of sci-fi to a create a truly potent blend, while this world he has crafted in many ways feels similar to the one seen in “The Crow” (1994) it also has definite shades of Terry Gilliam’s “Brazil” (1985) and Fritz Lang’s “Metropolis” (1927) also though to say anymore would risk giving the game away, which I will no doubt do throughout this article so treat this as your step off point, as there is a high risk of spoilers ahead.

Hitting the ground running Proyas gives his audience little time to adapt to the situation being presented to them, as within minutes of John waking up in the bathtub he is receiving a phone call consisting of the possibly insane ramblings of the psychologist Dr. Schreber (Sutherland) who seemingly knows what has happened to John, but Proyas like Dr. Schreber refuses to give the game away this early and instead drip feeds the clues, allowing the audience to only discover things as John does, as he makes his way through Dark City, a city named after the fact that it constantly shrouded in darkness, with none of the residents remembering the last time it was daytime, while movie theatre fronts advertise movies with titles like “The Evil” and “Nightmare” hinting that nothing is quite what it seems.

While John runs around the city piecing together his past and evading the Strangers, whose arrival is normally accompanied with the chattering of their teeth, while they also have the ability to seemingly change the city at will, unaware that his is also being sought by Police inspector Burnstead (Hurt), who is investigating the string of mutilated prostitutes whose murders John is currently being linked to, picking the case up from another cop who seemingly has been driven mad by his investigation into the murders with Burnstead’s investigation only providing further pieces of the puzzle, while also creating a whole bunch of new question, such as what is the significance of the Spirals which the now insane cop obsessively draws, why does John keep being plagued by memories of shell beach or Dr. Schrebers maze experiments? Questions all answered in time but Proyas happily teases out the answers, but certainly to the point of frustrating his audience, a crime that “Lost” was certainly more than a little guilty of.

“Dark City” is packed with colourful and interesting characters, with Proyas assembling a more than capable cast to portray them, with each character introduced seemingly more unique than the last, with this even stretching to the strangers, who although they are uniformed by their flowing dark trench coats, chattering teeth and bald heads, still are easy to distinguish between, with Richard O’ Brian continuing his habit of turning up in the most interesting of places by appearing here as Mr Hand, while proving a truly chilling voice for the strangers until the later introduction of their leader Mr. Book (Richardson), but even then his presence in none the less unnerving whenever he is onscreen.

The art direction throughout is stunning with Proyas using the sprawling cityscape to powerful effect, while pulling the focus in closer to revel the “Brazil” Esq set design with the city designed to appear as a sprawl of concrete and steel, with the sole source of light this city sees coming from the streetlights and strip lights, which only adds to the feeling that this film is essentially a spiritual sequel to it, while also coming across like a forerunner to the “The Matrix” (1999) which was released a year later and would also use some of the same sets, while the constantly changing cityscape can be found as an equal inspiration for “Inception” (2010). Proyas throughout the film constantly seems to be looking for ways to add surreal layers, while the decision to shoot the film in constant darkness, is nothing short of ballsy, especially as it’s far from the easiest conditions to shoot under and Proyas avoids the usual pitfalls this setting creates were usually the audience usually struggles to see what is happening on screen. Proyas also makes the most of the strangers ability to change things within the city, as buildings side into position or rise seemingly from nowhere, as he treats his setting like a giant building set, with the moving building shot like the majority of the film using old school effects and bringing back fond memories for myself of the Pirate Accountants in “Monty Python’s: The Meaning of Life”, while the constantly changing landscape frequently happening shortly after the audience has grown accustomed to the latest layout, while the ability to change the city on whim is also used to hint at hidden powers which John may process himself, yet another intriguing piece of this elaborate puzzle.

“Dark City” is the kind of film designed to inspire much like the films which paved the way to it creating and yet for some reason remains like Proyas under the radar for the majority of movie goers and it’s only more of a shame that we are willing to heap praise upon films such as “The Matrix” and “Inception” for their originality of vision, when they clearly seem to be taking cues from this film, not that the Wachowski’s are going to admit it anytime soon, unlike Nolan who modestly admitted to finding inspiration from this film and its own sources of inspiration while writing “Inception”. Still I’m not sure that I can truly describe this movie, which is a work of such creativity and vision that I’m more than sure that i’m not doing it justice, especially when it is a film best experienced first and then discussed and dissected at length preferably over some really good coffee and that’s what I’m going to now urge you all to do and uncover the secrets of “Dark City” for yourself.
Posted by Elwood Jones at 13:05