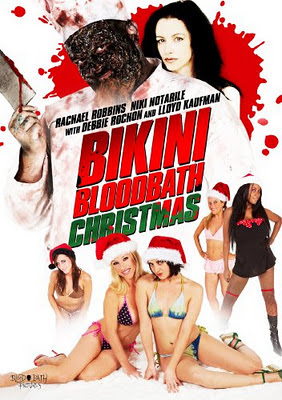 Plot: The Bikini Bloodbath girls are back and now working at a pot emporium called “Snotlocker”, while constantly battling their Christian rivals across the street who work at “The Underground Deli”. Meanwhile Chef Death has once again returned from the grave intent on causing some holiday havoc!


Review: The third and final film in the Bikini Bloodbath Trilogy though honestly it is far from essential to have seen either “Bikini Bloodbath” or “Bikini Bloodbath Carwash” to understand what is happening here as it works just as well on it’s own, while once again being one of those movies which makes you feel just a bit sleazy for reviewing it. Still it’s another curious Christmas movie which makes all the more perfect to look at as part of this ongoing “Alternative Christmas” season.

Right from the beginning the tone is set for what essentially the rest of the film will is like, as within the first fifteen minutes you get enough nudity, foul language and toilet humour to put most teen comedies to shame, while no doubt making it the new favourite movie of teenage boys everywhere, as it sets out to do pretty much what it says on the box, while highlighting how perhaps some of the cast got their parts as was no doubt the case of Monique Dupree, who has all the acting ability of a rock, while her IMDB profile states that she is regularly named as the first black scream queen, but surely there has been other black scream queens before her right?? Surely just because your a girl who appears in horror films doesn't automatically qualify you for such an honour!?!

Spending pretty much the whole movie in their bikini’s, the girls spend the majority of the film running from one random situation to the other, while usually being verbally abused in the meantime by their transvestite boss Mrs Johnson (Boland) who seems to be taking tips from Monty Pythons Terry Jones as Mrs Johnson is almost an exact copy of many of his grotty female characters. Still for fans of “Troma” this style of film making will be all to familiar and it only makes it all the more surprising to find out that this isn’t one of their titles, but still Troma founder & president Lloyd Kaufman shows up briefly as Dr. O’masterblaster who has a rather literal hands on approach when it comes to his patience, but it’s the sleazy kind of role that we have come to expect from him, after all it’s the sort of humour which “Troma” was built upon and it’s briefness stops it from becoming too bad taste unlike some of the scenes involving the fake ass, though once again I couldn’t help but think of Mel Brooks whenever I saw him, as to myself at least the two are scarily similar.

Despite the cast seemingly being hired for seemingly their zero qualms in regards to nudity, the performances are largely pretty good, though perhaps the less said about Monique Dupree’s acting ability the better really, though thankfully her screen time is kept mercifully short, so you don’t have to endure her rabbit in the headlights style of acting for long. The only problem the film has though is that we have no clear final girl for although the girls are easily distinguishable from each other; none of them come across as the one girl that is going to step up and save the day. Meanwhile the guys get off slightly easier, though mainly left to play curiously random roles as is definatly the case for Seymour and Guerette who show up as Prince Colwyn and Rell the Cyclops from “Krull” (1983) who have seemingly fallen on hard times since we last saw them, as they show up trying to sell the glaive as a security device, yet no one seems to question the fact that one of them is a Cyclops. Still these two characters are just another prime example of how you really stop questioning what is happening in the film, especially by this point were by now you’ve seen numerous exposed breasts, had the air turned blue by the expletives riddled rants of Mrs Johnson and seen the rival santa’s of the two stores duke it out in a paddling pool wrestling match, so “Krull” characters randomly appearing is pretty much accepted as the norm for this movie.

Although it is marketed as a slasher Chef Death” is actually given very little to do here, other than randomly appearing and killing off a member of the cast before disappearing again, usually until the film needs something to link one random situation to the other. Still the deaths are all suitably gory and graphic, with the film really pulling off some original kills, which perhaps loose some of their effectiveness due to the cheapness of some of the effects. Still the final twist makes zero sense, especially when we see him resurected only to get a twist revel which would have you believe otherwise.
“White Liger” are once more on hand to provide the soundtrack which largely consists of rocked up Christmas songs, which fit the film perfectly yet frustratingly I’ve been unable to find a copy of the soundtrack, as would love to have these guys sound tracking my Christmas parties, so alas it looks like I will have to dig out the Phil Spector’s again.

As with the previous films it seemingly acknowledges and embarrasses its sheer awfulness at the same time, which somehow makes it a strangely fun watch, though it’s hard to tell if it’s this reason or just the sheer amount of skin on display, foul mouthed monologues, gratuitous splatter or just the sheer randomness which makes up the relatively short run time, with the whole thing clocking in at just over an hour which those of you who are less forgiving when it comes to trash cinema will no doubt seem a lot longer especially as it seems like a lot of randomness with little in the way of actual plotting. Still if your looking for somthing a little gratuitous for the holidays then you can't go to wrong with this.
Posted by Elwood Jones at 14:03