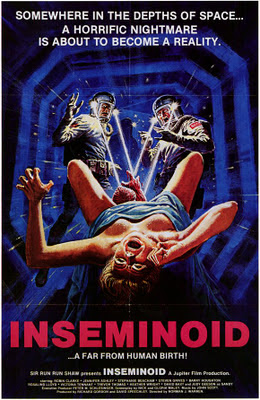 Plot: A group of interplanetary archaeologists investigating a series of seemingly abandoned ruins are thrown into chaos when one of them, Sandy (Geeson), is attacked and impregnated by a monstrous creature, which also turns her into a crazed killer intent on hunting down her fellow crewmates.


Review: It was somewhere around the halfway mark of this film, that I actually realised, that I was not watching the film the film I thought I had originally set down to watch, having somewhere along the line confused this film with “Creepozoids” (1987) which had been the film I had originally wanted to review, yet thanks to my confusions with titles I now found myself watching this “Alien” (1979) cash in instead.

One of several “Alien” cash in’s which came in the wake of it's release, all with vastly varying quality, with this film certainly not half as much fun as one of the better ones “Xtro 2: The Second Encounter” (1991) which memorably picked it’s favourite parts from “Alien” and “Aliens” to create a sequel which had absolutely nothing to do with the original “Xtro” (1983). However upon its release it was a radical departure from what had been established as British horror, by choosing a futuristic setting rather than the more favoured gothic setting of the Hammer Films, but all too soon you find yourself drawing similarities between “Alien” and this film, which is ultimatly a lot less gratuitous than this film, especially as it didn’t feature it’s lead actress being impregnated by an alien with a Perspex penis. Still looking at the frenzied and homicidal Sandy running around attacking her crew mates I couldn’t help but draw similarities between these scenes and the screenshots seen in the “Prometheus” trailer which also seem to show something strangely similar happening, though here's hoping that Ridley Scott hasn't decided to return the favour and rip this film off. 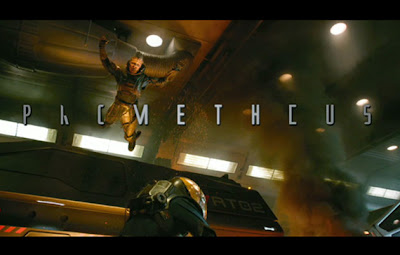 Funded in part by legendary Kung Fu producers “The Shaw Brothers” and made on a minimal budget of £1 million, the film would be shot in the UK, despite being given a distinctively American look, with the production shot almost entirely at Chislehurst Caves in Kent, while the island of Gozo near Malta substitutes for the desolate landscape of the alien planet and Warren certainly makes the most of such a limited budget and racks up a surprisingly decent body count, though it’s clear from the handful of alien shots we get, that this is were he cut the most corners as rather than anything resembling HR Giger’s now legendry creations we get what looks like a dime store puppet and no doubt explains why despite it’s setup, we spend most of the film watching Sandy running around like a frenzied lunatic and baring her teeth and generally killing any member of the crew who gets near here.

Due to working with such a low budget another noticeable sacrifice is with the soundtrack which is largely comprised of experimental synthesiser tracks which have such a hit and miss rate, it frequently kills any tension with Warren does manage to create, which made me wish that he had could have argued for a little more budget to get an orchestral score instead.

The plot is largely a nonsensical mess with Warren leaving it to the audience to piece it all together while leaving huge plot holes at nearly every turn with one crew member randomly becoming possessed after coming into contact with a bunch of crystals randomly left lying around for no real reason, while another crew member randomly commits suicide by cutting through her leg with a chainsaw as part of a half assed attempt to free her trapped leg (possibly a more enjoyable experience than watching this film) though this could also be more to do with the sudden realisation of the sort of movie she was in. This randomness continues until Warren clearly just figured that a frenzied Sandy was enough of a threat without really bothering to focus to much on the promised aliens and instead tries to further cover for it, by turning the film into a weird futuristic slasher. Meanwhile the character development is so non existent outside of this is Bob/Fred/Ethel etc and they do something or some importance to the mission and that is about the best you get, making these characters actually lower in the chain than your usual disposable slasher fodder, who normally have something to distinguish between them other than the fact that they are wearing different outfits, not that your really give much of a rats ass about these characters as none are particularly memorable bar Sandy and that’s only because she’s the only member of the crew frequently trying to kill of the others, aswell as some serious over acting on the part of Geeson who really seems determined to make the most of the role.

Warren here is clearly aiming for the sleaze factor; just incase the idea of a cheap looking alien impregnating a woman didn’t already give it away and the impregnation scene is suitably bizarre as a naked Sandy is forced to lye on a table, while the film cuts between gratuitous nudity shots and that now infamous Perspex penis, all while the soundtrack gets weird and for some unknown reason it also starts raining space pixie dust and god knows why the Doctor is in this scene, but alas these are just more questions you will no doubt be left asking if you manage to make it through to the end credits which could essentially just be watched instead as each of the cast are shown first playing their character before then cutting to their characters death scene, which leads me to the sole good thing this film has to offer and that is that you do not only get a very generous body count, but also a bunch of truly inventive kills with spear gun and what looks like a cattle prod all coming into play, while we are also treated to a random cannibalistic impulse by Sandy and it’s these moments were the film almost redeems itself, it’s just a shame that Warren fails to invoke even the most basic of feeling for these characters, which ultimately takes a lot away from these numerous kills.

Despite threatening a sequel with it’s ending, this would thankfully fail to come to anything bare the occasional rumour, leaving this film as the curiosity it is and with absolutely zero interest from myself to see more, after all if I wanted to see an alien wanting to reproduce with humans, I’d honestly rather just dig out “Species” instead.
Posted by Elwood Jones at 13:16