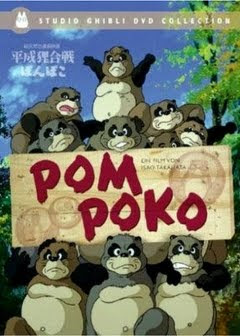 Plot: A community of magical shape shifting Tanuki (or Raccons depending on your translation) battle to save their forest home from being destroyed by urban development


Review: While studio Ghibli’s films may make them one of the best known anime studios in the world, there are still films in the back catalogue which are still unfairly looked over and this film is certainly a prime example of this, especially as it rarely gets a mention when the films of Ghibli are discussed, outside of perhaps a passing comment over several of the films more risque moments.

Based on an idea by Studio Ghibli founder Hayao Miyazaki, “Pom Poko” is one of only three Ghibli films to be directed by the studios co-found Takahata who had previously been responsible for two of Ghibli’s most grown up films “Grave of the Fireflies” and “Only Yesterday” the latter whose release was blocked by Disney due to its references of menstruation, which they couldn’t remove due to a clause in their contract with Ghibli which prevented them editing their films and leaving the film effectively in a legal black hole. “Pom Poko” however is a much more fantastical film while still featuring a strong emphasis on the environment, a favourite theme of Miyazaki and one that has frequently featured throughout Ghibli’s films and here it provides the strong central theme of this film.

Shown from the perspective of the tanuki, who are all gifted with the power to change their appearance from their natural appearance to human raccoon hybrids, who over the years have learned to speak and write Japanese aswell as nominating their own Emperor seeing how they frequently refer to the years of Pompoko. As a side effect of this, they have also developed an inability to remain serious for any length of time, aswell as a worry addiction to TV and Junk food as well as spontaneous partying.

The tanuki throughout the film generally have three main forms with their first being their everyday raccoon form which the human population see’s them as, while their second main form is their more humanoid form which they use when together and out of the sight of human eyes and their third and final form is more of an excuse to pay homage to anime style of Shigeru Sugiura which is far more cartoonish form and generally serves as an in-between form between their first and second forms and generally used when they feel sad or lose control of their humanoid form usually after being hit in the head or panic’d by one of their fellow tanuki.

Some tanuki however are able to this ability to transform further and morph into not only object but take on a human forms as well as more fantastic creations, but it is a not universal gift varying greatly as humorously shown during the initial metamorphosis training, a major plot point which later become integral to the plotline as members of the group are faced with choosing between their own survival and that of their fellow tanuki.

While featuring familiar tones of Richard Adam’s “Watership Down” especially in terms of it’s setting with man’s constant development into the surrounding forests being the main plot and threat here, though unlike that story it is a considerably lighter tone which this film takes and certainly features none of the warrens of blood or rabid characters that the questionable (in terms of the suitable nature of it’s content) childhood classic featured and although it’s a largely comic and fantastical tone throughout it still manages to get it’s message across while even tacking on a nice subtle environmental message in it’s closing thoughts.

What however is slightly more questionable here is the character design which makes no beef about making it’s characters genders clear, as the male tanuki are amusingly drawn with scrotums which even more amusing are used later as a form of attack, aswell as providing my personal highlight when we are treated to the sight of Gonta and his followers parachuting into battle and using their scrotum’s as parachutes in a scene which has to be seen to believed. Still these prominent genitals however are not so much a way of providing a few cheap laughs (and no doubt irking a few more sensitive parents), but due to prominent genitals being an integral part of tanuki folk law, but needless to say this is covered for in the dubbed version were they are referred to as “pouches”, something thankfully left unchanged for the subtitled version.

Faced with the constant city expansion which continues to take over more and more of their forest home, the tanuki are frequently forced to come up with more and more elaborate schemes to combat the human intrusion, frequently using their shape shifting abilities to carry out their plans, culminating in a warped street parade of ghosts and demons, while the tanuki are also frequently forced to use their humanoid forms to fight the human developers, especially at the end were Gonta and his loyal followers launches a full scale attack while the elders fight the constant struggle of keeping their powers secret or to expose themselves to the humans. However it’s this constant struggle for their territory does however mean that it frequently lacks the warmth of some of the other Ghibli titles which has lead to much criticism in the past, but then Takahata as with previous Ghibli films has frequently avoiding sticking to these so called rules or context and storytelling and never being afraid to push the studios boundaries he once again sticks to his own style, even though in comparison to his other two films he has directed for the studio, this is considerably lighter in tone.


The other main problem the film suffers from is that despite a generous run time, it frequently feels like the tanuki are essentially just recycling the same plan over and over and while their morphing antics are frequently humorous, it does however feel like their plans never seem to be overly affective as sure most of it is a treat to watch, but you can't help but wonder what the point is?


Despite it's flaws it still remains one of the lesser watched titles in the Ghibli back catalogue and one certainly worth giving a look, while showing a diffrent side to Ghibli frequently overlooked in favour of thier more popular titles, yet still packed with enough humour and warmth as to not loose the no doubt already devoted followers.
Posted by Elwood Jones at 14:09