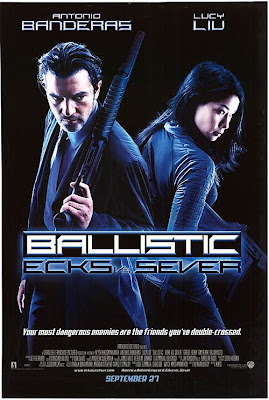 Plot: When the director of the Defense Intelligence Agency (DIA) has his son kidnapped by former DIA agent Sever (Liu), former FBI agent Jeremiah Ecks (Banderas) is called in to find the boy and track down Sever.


Review: Another film to be branded “Worst film of all time”, this film actually sparked something of a worry in me, for all though it has some serious faults I actually kind of enjoyed it, for much like “Jaws: The Revenge” here was a film every other critic was seemingly raining scorn and hate upon, while I was being for the most part pretty entertained by this film. Does this mean that I have become too soft with my critical views on the films I watch? or has all the numerous bad movies I have watch over the years, finally burned out the part of my brain which regulates film and taste would otherwise regard this as celluloid trash?

To start I should point out that this film which suffers greatly for it’s flaws, the major one being down to the plotting, which is essentially non existent with what plot we do get causing more confusion than clarity, as what I can only assume were supposed to be clever plot twists frequently prove increasingly nonsensical, while the film spends most of it’s time trying to find a way to bridge action scenes.

The other problem with the plotting is that no one seems to know what exactly is supposed to be happening, thanks to numerous plot threads such as a mystery nano technology weapon, the death of Ecks wife and even the supposive rivalry between Ecks and Sever, which doesn’t stretch past a single confrontation before we have the two agent teaming up to take on the films big evil, nothing really gets fully developed past the stage of throwing the idea out onto the screen and trying to link it with the various other plots happening at the same time, something only made clearer when we meet Eck’s son in a yawn full twist which produces only further confusion as for how a couple clearly of Latino decent managed to produce a child so white!

Helming the film what would be his second feature film after previously directing “Fah” which was one of the highest budgeted films in Thiland’s history and from its success, lead to Director Kaosayananda (seen here under the call name Kaos) being given the chance to helm this film, though after this film it would be a further 10 years before he got chance to helm another, with his forthcoming “Bangkok Love Story” unsurprisingly as result of this films failings is being made back in his native Thailand. Still clearly having set out with the intention of making something flashier than he was able to pull off he struggles to hold the production together, while only showing any form of directorial confidence during the action scenes, which are essentially the only reason to watch the film, as anytime things aren’t exploding on the screen the film starts to seriously loose it’s focus, despite Kaosayananda frequently trying to add similar stylistic fair to these scenes, which more often than not comes off more cliché than effective, as Eck is shown frequently moodily smoking or shooting him in slo-mo as he walks in the rain, which while undoutably pretty to look at, doesn’t give us much in the terms of mood or character development, especially when we are shown flashback with no previous context to indentify what they are supposed to be.

Despite having two strong leads with Banderas and Liu, both having proven capable of turning around even the most questionable of plots, as shown by Liu in the “Charlie’s Angels” movies and Banderas having most memorably having done this with “Assassins” and even more so in my own opinion with “Desperado” which much like this film was a collection of flashy action scenes strung together with a simple revenge story, with his performance raising it way above what it could have been, thanks to his portrayal of the revenge seeking mariachi, something only further emphasised when you compare it to it’s indie source material and Robert Rodreigez’s debut film “El Mariachi”. Sadly both of the leads look frequently bored during the action scenes, even when Liu gets to unleash a heavy machine gun on a group of FBI agents.

The supporting cast are surprisingly made up of no name actors, especially for a film with a box office budget and backing of a studio I would have expected them to have at least drafted in a half decent actor to play the big evil, but the best we get here is Ray Park who is probably best know for his roles as Snake eyes in “GI Joe: The Rise of Cobra” and Darth Maul in “Star Wars: The Phantom Menace” and yet again he proves that he is great when he’s not required to speak, especially as his talents are truly with his Martial arts, which once more receive a suitable showcase, especially during his showdown with Sever which was another of the high points, even though it didn’t make sense to suddenly have them stop shooting at each other so they can then toss down the small armoury they are carrying between them, all so they can have a knife fight.

The action sequences are in my opinion the sole redeeming feature of the film and what also stops me from wanting to agree with the masses in thier branding it as the “Worst Film of All Time”, as Kaosayananda is clearly a subscriber to the John Woo style of shooting when it comes to action, as he fills the action scenes with wave after wave of faceless agents to provide target practice for Ecks and Sever while no one seemingly ever has to reload another key staple of Woo’s movies. Kaosayananda also shows a flair for making things go boom, demonstrating some ambious shots frequently throughout these scenes, including a long tracking shot of an agent falling from a building and hitting a car in a single shot and even making two cars pirouette side by side at one point. Needless to say if the leads were more into shooting these scenes they would have been better, but both still manage to pull off some great performances in these scenes, while the use of stunt doubles for some of these scenes are so well blended with the actual performances of the actors, that I couldn’t tell if they were even being used, with Liu especially showing herself once again rather capable when it came to her big kung fu showdown.

Yes it is beyond flawed and more of a bloody quivering mess of a film, that has been almost crudely sewn together and pushed out in front of an audience, but when it works it works well and while there might be some horrible acting on display and the less said about the scripting the better, but perhaps unlike so many of the general mainstream movie going public and critics which branded it, that having seen so many horrible movies and knowing while watching it, that I could still name a bunch of movies I would consider to be worse than it, that I still consider it harshly rated and far from the worst movie of all time which many would have you belive it is, though best approached with pre warning of what to expect.
Posted by Elwood Jones at 14:06