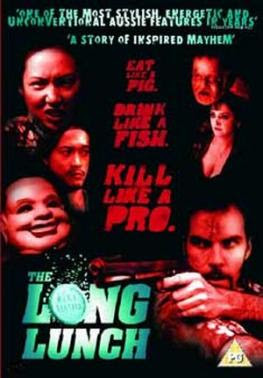 Plot: Five Hardened criminals plotting their next big robbery, meet at a Chinese restaurant unaware that the staffs have overheard their plans and soon making plans to hijack their heist, in a bid to save the restaurant owner whose debt to a local triad gangster threatens to put them all out of business and all before the bill is paid.


Review: “The Long Lunch” might possibly be one of the most obscure movies I have reviewed here on the blog, seeing how there is no Wikipedia pages about it, seemingly no other reviews (outside of a couple of minimalist Amazon reviews) and even the IMDB page is nothing more than a synopsis and cast listing, which is especially suprising seeing how even the most random pieces of cinematic trash and student films usually get more activity than this.

I originally stumbled across this latest find at a car boot sale (essentially the same principle as a yard sale) a few months back and since then it has sat in the watch pile taunting me with it’s intriguing plot and cover (especially the character in the giant costume head). So in a bid to finally clear some out some of the VHS I have amassed, most of them picked up with every good intention of reviewing them, only to get distracted by other films, I finally decided to watch this one and the results were mixed to say the least.

This sole feature film of Australian Director Redman, whose background is predominantly in advertising, who according to his IMDB profile has won awards at nearly every major advertising award show around the world as a copywriter aswell as art / creative director, before switching to directing commercials were he was named “one of the hottest new directors” at the Cannes Advertising Festival in 1997 (yep I never knew that existed either) and yet despite shooting advertising campaigns, for Sony, Audi, Carlsberg, Sprite, Kia and Sunsilk still remains an unknown to most of us bar those who I guess obsessively research their favourite adverts to find out the directors.

Still advertising has produced many great directors in the past including such visionary directors as Spike Jonze, Mark Romanek and David Fincher and like them Redman also processes an eye for visual flair with his direction, which he brings to the film as he intercuts shots with video game footage and karaoke screens to help tell his story, with the whole film clearly shot with the intention of giving it more flair and style than the usual run of the mill thriller, with Redman also clearly being another director keen to imitate the pop culture cool of Tarantino, yet like many of the imitators he too suffers from lacking Tarantino’s ear for dialogue.

Opening with an unnamed triad (Yang) performing his own brand of liposuction intimidation on the restaurant owner (Pang), before disgustingly drinking the contents of the liposuction jar, a technique he later confesses to being pure improvisation and even name checking this technique as being the same one used by Robert De Niro, though honestly I can’t remember seeing De Niro ever drinking the contents of a liposuction jar. Still if this doesn’t have you reaching for the eject button, you soon get to meet the hardened criminals at the centre of the films plot who also frequently push the boundaries of taste, while also your usual bunch of colourful characters, who it would seem are sadly all surface colour as we never really get to learn much about who these characters are, or what their backgrounds are outside of their individual skill sets. The same can also be said for the restaurant staff planning to rip off the crooks, who include a moody waitress (Song), a roast duck obsessed chef (Chan) and a crazy ex Hong Kong Cabbie (Ooi) who like the crooks remain painfully undeveloped and nothing outside of the surface gloss.

These plus and minus qualities continue throughout the film as it frequently feels that with every good point, it will usually being followed closely by a negative point, hence we get colourful yet under developed characters, a great ending only to then have a clumsier one tacked on the end, which seems for some reason to be trying to attach some kind of confused half assed moral message to the film. We also get a great setup, yet the film is frequently sewn together with clumsy scenes, so that while the main action of the plot is unfolding with scenes of the crooks discussing random subjects such as bird nest soup with none of the aforementioned Tarantino cool it’s clearly trying aim for and with seemingly no point but to show what they are doing while the restaurant staff rip off their heist.

The film all looks very nice and despite being shot on what would seem to be an indie budget still looks great and despite a strange leaning towards giving it a grimy feel, with the scuzzy highlights including a loveless fuck against an arcade machine (while still playing the game no less) it thankfully never slumps to the sleazy depths of nearly every British gangster film of late, with the few actions scenes all being handled well, even though it ultimately feels a little hollow, with a twist towards the end looses a lot of it’s power, thanks to it raising more questions regarding it’s plausibility, even to the least nitpicking of viewers.

Ultimately the film does show a lot of potential for Redman and while he has yet to follow it up, it would be nice to see something a little more polished and focused from him in future, especially with his talent very much being comparable at the moment to the penny in the pile of shit and with a decent editor or more firm studio head behind him, he could potentially be a director worth watching more from, should he ever decide to break away from advertising again, which looking at his IMDB page wouldn’t seem to be anytime in the near future. Still if you can find it and willing to watch with an open mind, there is still fun to be had here but it’s one best approached with caution.
Posted by Elwood Jones at 00:52