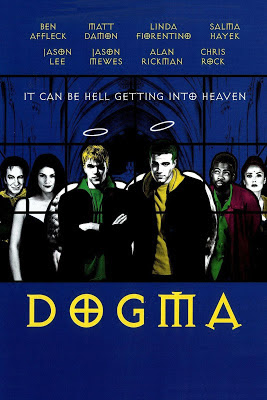 Plot: Exiled to Wisconsin, two fallen angels Barleby (Affleck) and Loki (Damon) having discovered a loophole in the newly revised Catholic Dogma which will allow them back into Heaven after being cast out by God, unaware that they could potentially undo all creation. Upon discovering this Metatron (Rickman) aka the voice of god, tasks abortion clinic worker Bethany (Fiorentino) with stopping them, while she soon finds herself aided by Rufus (Rock) the thirteenth apostle, Serendipity (Heyek) a muse with writers block and Prophets Jay (Mewes) and Silent Bob (Smith)

Review:  To approach this film I think its best to apply Kevin Smith to the many worlds theory which posits the existence of an infinite number of Kevin Smiths in an infinite number of universes. Now with this in mind I would like to think that at least in one of them he would be still making films of this standard, rather than churning out his lazy dick and fart joke favoring movies of late while generally bashing critics in public rants. Still there was a time when Smiths career was one of a symbiotic relationship between his two styles as he would make a smart dialogue driven comedy (Clerks & Chasing Amy) and follow it up with one of his fart and dick jokes favoring comedies (Mallrats & Jay and Silent Bob Strike Back) before then making one of his smarter comedies, a pattern which worked well and saved audiences from becoming bored with one style, while keeping Smith’s worse fresh and interesting. Alas there must be a trigger point for change and that was “Jersey Girl” a severely underrated smart comedy, which was so largely bashed it seemingly shook Smith’s confidence as since that movie he has concentrated on making solely fart and dick joke comedies, aiming for easy laughs over the smart comedy which helped his original indie film get noticed in the first place, something seemingly also forgotten by Smith judging by how “Clerks 2” was shot in his now favoured style over the original films memorable style.

From the start it is clear that Smith is not pulling any punches when it comes to poking fun at his source material which in this case is Catholic Dogma, with the opening joke of the Catholic church bringing in a number of changes including the now legendry “Buddy Christ” as part of their Catholicism-WOW campaign to revitalize interest in the church. No doubt this is also the get off point for anyone slightly sensitive about having their belief system questioned, something I have always held the firm belief that questioning your beliefs only makes them stronger and Smith himself raised a devout Catholic really lets his knowledge of the faith shine throughout, though needless to say it did upon its release piss off a whole bunch of Roman Catholic groups in particular the Catholic League, who were more than happy to brand Smith as being worse than Hitler and the KKK combined for daring to make such a film. Still for those of you not concerned with such things or more willing to see the funny side of religion there really is a lot to enjoy here, especially when Smith is not making fun of religion just for the sake of it, but also using the film as a platform to raise his own questions about aspects of his faith without at the same time feeling as if he needs to turn it into a sermon to do so. Still perhaps if these religious groups looked a little further than the surface of the film, they might have been less quick to arms, especially when Bethany is in many ways representing the atheist view point, as she questions the existence of god largely thanks to her own misfortunes, with each of her companions playing their part in restoring her faith, with the exception perhaps being Jay and Silent Bob, whose appearance is more to do with continuality of the Askview universe than plot necessity. At the same time implying that god’s true form is Alanis Morissette, let alone that she is a woman might only undo this much like the idea of a thirtieth apostle.

The plot is broken into two main threads with the first following Bartleby and Loki as they journey across country on their mission to get back into heaven, along the way scratching off a few remaining grudges such as the cleansing of the Mooby’s board of directors. The second thread follows Bethany and her ragtag group as they try to track down Barleby and Loki, with At the same time while Bartleby and Loki’s actions could be seen as putting them in the position of being the bad guys of the film, ultimately they are merely pawns of a larger game and even the supposed bad guy of the film Azrael (Lee) is far from the big evil you’d expect especially considering how little screen time he’s given almost as if Smith is trying to imply that the lines between good and evil are more grey than black and white and that it is often our own actions which determine the side in which we stand.

The cast are all memorable in their individual parts, despite Smith later commenting on the difficultly he had working with Fiorentino whose role as Bethany he wished he’d given the role to Janeane Garofalo instead, while even more disturbingly considering Joey Lauren Adam aswell, whose raspy tones would have no doubt driven me over the edge. Still it is Alan Rickman whose presence threatens to overshadow the rest of the cast with his fantastic performance as the sarcastic and generally pissed off Metatron (aka the voice of god), who once again manages to elevate even the most simplest of dialogue. Equally fun are Affleck and Damon who bounce off each other and transfer their off screen friendship onto the screen as they provide many of the films best moments and the decision to follow these two as much as Bethany’s group ultimately proves to be a great one, especially when they are just so much fun to hang out with.

Unsurprisingly controversial for its stand point on religion, the film remains one of Smith's strongest movies to date and ultimately a sad reminder of what could have been, had Smith continued to make films of this intelligence, something which Smith has only recently hinted of being capable of producing again with the sadly overlooked "Red State". Still if your not too firm in your religious stand point there is a lot to enjoy here while proving that you can make a film about religion without needing to get on a soapbox to make your point and plus how seriously can you really take a movie with a rubber poop monster in it?