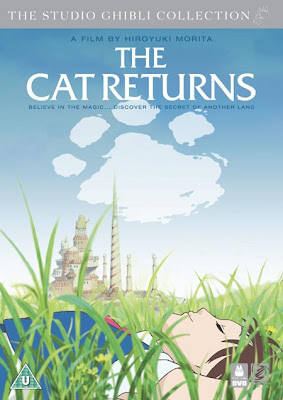 
Plot: When Haru (Hathaway) rescues a mysterious cat from being hit by a truck, she soon finds herself unwittingly set to wed to the cat Prince Lune (Bevis) under the orders of the Cat King (Curry) while slowly finding herself turning into a cat. Now her only hope lies with the dapper Baron (Elwes) and his portly sidekick Muta (Boyle).

Review: For those of you who ever wondered what the Bowie staring classic “Labyrinth” would have been like had the main characters been replaced with cats, this film is essentially the answer to that question, much like how “Battle: Los Angeles” answers the question of what “Black Hawk Down” would have been like with a bunch of alien warlords.. True it might not be a scene for scene remake per say, but the general atmosphere between the two films can certainly be compared, with a girl being whisked away to a fantastical kingdom and having to battle to find her way out, let alone the fact that this film also features its own labyrinth.


Originally starting life under the title of “Cat Project” in 1999 after Studio Ghibli received a request from a theme park to create a 20 minute short staring cats. Despite the theme park cancelling the project, studio head Hayao Miyazaki kept the project as a way of vetting future directors. The project would eventually be given director Morita, who’d previously worked as an animator for the studio on “My Neighbours the Yamadas”. Aswell  as being the sole feature he has directed for Ghibli, it is also sadly one of the lesser seen features, which is such a shame considering what a great starting point to the Ghibli back catalogue it provides with its simple and fun storyline. At the same time its slender 75 min run time barely counts as being feature length, while only leaving you wanting more by the time the film ends, though sadly a sequel has yet to happen, which at the same time is hardly surprising considering the company is hardly renown for making sequels to any of their features.


While perhaps smaller in scale than some of the Ghibli such as “Princess Mononoke” or “Laputa: Castle In The Sky”, it is perhaps because of this that the film is such an easy watch and one which despite lacking the scale still manages to maintain the usual Ghibli charm and magic we have come to expect from their features, as even if you’re not the biggest fan of cats, it is hard to not be charmed by some of the characters seen here, with my personal favourites being the cats whose markings make them look like secret service agents and who are shown throwing stray cats out of the way of the Cat King. Equally present is the fun and playful sense of humour, which only comes more into play once the story enters the Cat Kingdom, were the frequently slapstick humour really comes into play.


The humour while slapstick in its focus, also throws in a few surreal laughs for good measure as entertainers who fail to entertain the king or even members of his court who laugh at things he doesn’t find funny, soon find themselves thrown out of a window. Meanwhile fights usually breakdown into fights of off screen chaos as furniture and stray weaponry flies through the air and soldiers more often than not collapse like dominos which have such a sense of fun even with their OTT nature that is hard to not enjoy these moments, especially as they only grow more madcap as the film progresses and perfectly suits the mood of the film, which despite the occasional moment were the film tries to do something more serious like the fantastical tide of cats which whisks Haru away, the tone of the film is largely comedic.


The characters we see here while on first appearances (outside of the baron) frequently might seem on the surface alittle plain, even more so when you compare them to some of the colourful characters we have seen in other Ghibli features, they are for the majority of them still made memorable thanks to some great voice work, though saying that I can currently only vouch for the dubbed version of this film, with Ghibli films often being notable for the differences in how characters come across, with Jiji in “Kiki’s Delivery Service” being a prime example. Sadly though I was let down by an almost unrecognisable Tim Curry at The Cat King, who had I not read through the credits, I would have never believed that it was him. The Standout here though is Boyle who portrays the food obsessed Muta like a grumpy version of Porthos from “The Three Musketeers”, with his food obsession leading to what could have been one of the more unusual deaths via drowning in jelly.


The animation is of the usual polished standard we have come to expect from Ghibli, with some stunning backgrounds, which only making the world seem all the more real, with the character animation in particularly focusing on what cats would look like if they walked on their hind paws, though opting to look past the awkward movements this would no doubt cause, with Morita happily leaving it at just permanently limp paws.


It is a shame that “The Cat Returns” is as frequently overlooked as it is, even more so when it is in favour of the likes of “My Neighbour Totoro” whose memorable titular character failed to spawn for myself atleast a memorable adventure. However with Studio Ghibli’s popularity ever increasing hopefully it will be one which later truly find the recognition it deserves.
Posted by Elwood Jones at 15:29