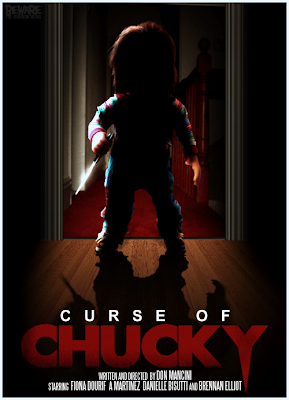 
Plot: Set four years after the events of “Seed of Chucky”, where wheelchair bound Nica (Fiona Dourif) mysteriously receives Chucky (Brad Dourif) in the mail looking surprisingly the same as his original good guy doll form (you know prior to the amount of damage he picked up over the course of the previous films). Unaware of whom sent him or even what he is, disregards the doll who after Nica’s mother mysteriously dies from apparent suicide ends up in the hands of her niece Alice as the Nica’s sister Barb with husband and nanny in tow arrive to handle their mothers funeral. However mysterious deaths soon to befell the group as Nica soon begins to suspect that the may be more to the doll than first suspected.


Review: Entering into this sixth film in the “Child’s Play” franchise there is certainly the nagging question of what the saga really had left of offer? A question certainly relevant at this point in the series now we have seen the living doll serial killer get married and even somehow spawn a son  (still not sure how that really worked). So with this in mind where could the series possibly head next with it only looking more likely that the series be sent to one of the possible franchise graveyards such as putting Chucky into space or perhaps Hawaii (a suggestion previously posed by Director John Waters when he cameoed in “Seed of Chucky”).

Certainly the future for the series did look bleak after the last film, which ultimately turned out to be a car crash of half-baked ideas and random casting. So you can only imagine my surprise to hear that at Frightfest this year there would be a new Chucky film premiering, something only added to by the news that this would not be a remake or even a reboot, something which seems to the current favourite approach to milking established franchises these days, so credit really has to be given to director and series creator Don Mancini for bucking the trend and not only finding a way to continue the on-going Chucky saga, but for also for somehow breathing new life into a franchise which by all appearances was dead and done. True it is a direct to video release, making it the first of the series to not see a theatre release (aswell as the first shot digital) which only makes it more of a shame considering how it is also possibly the strongest entry since my personal favourite “Child’s Play 2”.

Now for the established fans of the series there may be a sneaking feeling of Déjà vu, especially seeing how similar the plot might seem to that of the original film, what with Alice having secret conversations with Chucky and the grown-ups generally disregarding her comments as being part of a game she is playing. Meanwhile Chucky sneaks around in the background and randomly appears at various locations around the house. The fans should however fear not for while there might be similarities in plot framework this far from a remake or reboot trying to rework memorable sequences from the original into a new film. At the same time Mancini makes the ballsy move of using a slow burn reveal for Chucky, something unheard of especially when the character is so well known at this point in the series, the idea of pushing them into background appearances and brief glimpses hardly sounds like it would work, much less the fact that Chucky waits until around the 40 min mark to reveal himself to the group, yet surprisingly this really works as Mancini not only returns the series to its horror roots, despite having over the course of the last few films gradually moved the tone of the films more toward comedy. Here however he successfully reminds us how scary Chucky can be, especially when he more reknown for being a wise ass these days than an object of terror, again thanks to Mancini tweaking his character while the removal of Tily, removes the back and forth banter from were most of his comedy elements were gained from.

Brad Dourif is once again on great form (but does anyone want to name a film were he isn’t?) as he returns once more to voice Chucky and even though he is given less to say here with Douriff recording all his dialogue in a day, his presence however is still as memorable as always with all the usual mannerisms and memorable laugh all still kept faithfully intact. Elsewhere despite the more serious approach to his character Chucky still manages a few moments of murderous mischief including a round of guess who’s getting the bowl of rat poison chili, which will no doubt have you trying to figure out which character is going to get it in a scene played out gleefully with maximum misdirection and bluffs.

More interestingly though is that Dourif himself also makes an appearance in the film the first since the original film as he appears here as Chucky’s former human form, as we also get to learn more about Chucky’s past and how it links to Nica’s family as his random appearance into Nica’s life slowly starts to become less random, which in turn is only further credit to Mancini’s writing that he is not only able to craft here a clever mystery, yet also being able to tie it into the rest of the Chucky timeline, so much so that I frequently found any gripes I had regarding characters seemingly being written out or even regarding the seemingly new Chucky model being covered as the film, almost as if Mancini was reworking the film as I was watching it to handle those gripes.

While on the subject of Dorif though, it is certainly worth mentioning his daughter appearing opposite her father here as the feisty Nica whom being confined to a wheelchair not only provides the film with numerous interesting situations to overcome such as trying to get to the top floor of the house when the power to the elevator has been cut. Equally the idea of a paraplegic heroine is certainly something that’s never been seen before, with handicapped characters, usually being confined to supporting characters than the lead, especially in the case of horror and here it gives the film a shake-up which combined with the slowly mounting tension, with scenes such as Chucky using a blackout to stab here in the leg, before returning to his doll form, Nica of course not being able to feel him stab here there left looking confused as to how she got the wound is cleverfully used while Chucky continues to hide his presence as he shows the kind of restrain not seen since the first film, which of course only further keeps the audience guessing on how things are going to turn out.
Despite more directors these days favouring the use of CGI over practical effects it is refreshing to see this film staying true to its roots and one again using animatronics for the majority of the Chucky effects and only using CGI for the more complicated sequences which see him running around in the background or walking slowly down the stairs, it’s really another example of how CGI should be used in film making as an assist rather than the sole means of bringing fantastical creations to the screen, with the presence Chucky still maintains as a result of this process only being further evidence to the argument.

While the rumours continue regarding a studio reboot for the series, Mancini has here given the story once more potential new directions for the story to go, which certainly makes me hope the wait won’t be as long between this latest edition and the next, especially when Mancini has reignited interest in the series for even the most jaded of fans.
Posted by Elwood Jones at 13:08