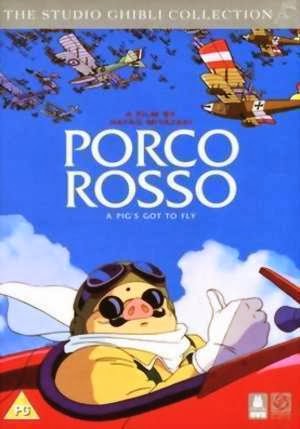 
Plot: Set in 1930s Italy, veteran WW1 pilot Porco Rosso (Keaton) makes a living hunting the local sky pirates, when not drinking away his evenings at his long-time friend Gina’s bar. However when the local sky pirates hire the arrogant American Ace Curtis (Elwes), Porco finds his peaceful life thrown into turmoil as he heads towards an inevitable showdown for dominance of the skies with Curtis, while also unintentionally gaining a feisty mechanic in the form of Fio (Willams).


Review: As I’ve covered in my previous Studio Ghibli reviews, studio founder Hayao Miyazaki has always held a fascination with flight and flying machines, which really make this, his love letters to these passions, even more so when he is given such free reign to explore these passions here in a way hadn’t had with his previous films and it’s an opportunity he fully embraces


One of the more overlooked titles in the Ghibli back catalogue alongside the likes of “Little Norse Prince” and “Pom Poko” it is still unclear to myself why it isn’t viewed as being on the same level of "Kiki’s Delivery Service” and “Laputa: Castle in the Sky” especially when this is perfect entry title to Ghibli’s  with its fast and humorous plotting, colourful characters and exciting flight scenes all make for an accessible film even for viewers getting their first taste of anime. As a result it joins a rather unique club of movies alongside films likes of Kurosawa’s “Red Beard”, Hitchcock’s “I Confess” and Spielberg’s “Amistad”. All films equally on a par with their better known films, yet for one reason or another seemingly destined to remain as lower ranked films on their resume.


Opening to Porco rescuing a group of kidnapped schoolgirls from the Mamma Aiuto Gang, the tone of the film is set from the start, with the bumbling sky pirates and Porco’s philosophy of only damaging the pirates planes to put them out of action temporarily rather than permanently to ensure he can hunt them another day as part of an unspoken symbiotic relationship they share, if more from Porco’s side so he can maintain his carefree existence. The fact that he also has the face of a pig being of minor concern to everyone it would seem, even in terms of plotting were it is never fully explained and instead alluded to an act of cowardice committed by Porco while serving in the Italian Air force during WW1 and from whom he is still being AWOL.


The world the film is set is far from a realistic one as it bars all the usual fantastical touches which have become so reknown with Miyazaki’s work, even if this time he not setting the film in a fantastical land, but instead Miyazaki’s vision of the Adriatic coast  and Milan in a pre-war Italy. The tone though is kept intentionally light hearted throughout, as established in the opening were we see the kidnapped schoolgirls being far from concerned at the prospect of being kidnapped by the Mamma Aiuto Gang, especially when they spend the experience generally causing mischief and havoc for the gang.


Despite the humorous tone the film still manages to fall somewhere between the two distinct styles of film making Miyazaki, with his film either falling into a cynical or positive categories, here he has made a film which can never be placed in either categories as here he focuses on the small things which make life worth living, while alluding to the horror which we create for ourselves with war during a flashback were Porco remembers seeing a spectral trail which upon closer examination turns out to be the souls of lost fighter pilots. Still this is a film which isn’t going for heavy social commentary but wonder and amazement instead as here he is clearly firing on all cylinders as both storyteller and craftsman.


Unquestionably though this is a film which Miyazaki has made for himself first and foremost, as clearly seen by the amount of references to the pioneers of aviation through to the  details which have gone into the various planes and thrilling Ariel sequences none the more seen than during the final showdown between Porco and and Curtis which starts despite starting as a traditional dogfight soon takes on a mischievous edge as the two pilots resort to throwing junk from their planes at each other, before finally deciding to land and settle things with a spontaneous boxing match.  Such a sequence is only really pulled of on the strength of the characters with Curtis being everybit the brash American while at the same time clearly being modelled after the heroes Errol Flynn was renown for playing while the two also clearly share a jawline to boot.


Unlike the other dubs which Studio Ghibli have received on their other titles the English voice cast on hand here certainly contains a lot less star power than some of the more popular titles, with Michael Keaton being the closest the cast list comes to an A-list name. Despite this the dub is none the less superb, with Keaton once again being unrecognisable as seems to always be the way whenever he lends his voice to an animated  character. Despite the lack of star power each of the cast really embody their characters and really make them seem believable.


While it might not be as deep as “Princess Mononoke or as playful as “My Neighbour Totoro” but this is still an enjoyable film none the less while Miyazaki proves himself more than capable of working outside of his comfort zone.
Posted by Elwood Jones at 13:42