At The Earth's Core 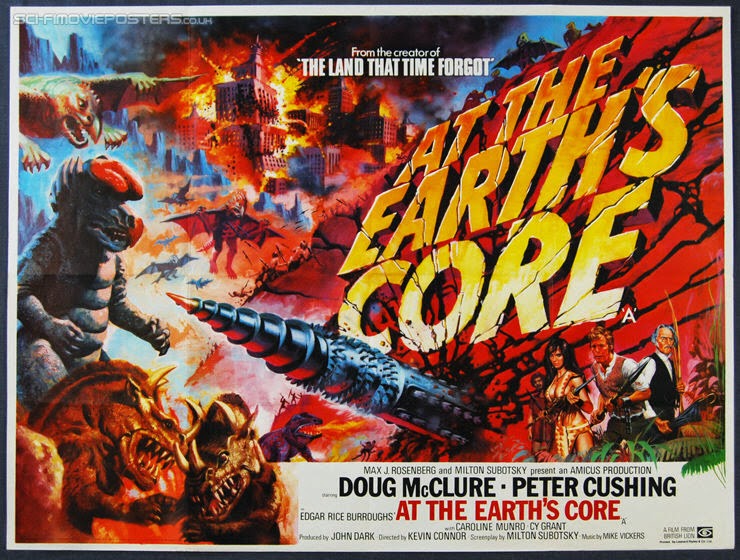 
Plot: Victorian scientist Dr. Perry (Cushing) and his assistant David (McClure) are making a test run of their drilling machine “The Iron Mole” when a freak accident throws them off course, were they invariantly discover a prehistoric world of monsters and cavemen ruled by the telepathic Mahars and their mindless Sagoth servants.


Review: Another of my childhood favourites aswell staring my hero Doug McClure whose fantastical adventures were firm favourites amongst those early cinematic experiences as McClure played rugged heroes all about seducing exotic ladies and generally punching out anything which got in his way, I mean what's not to like about that? While I might not have known his name at the time I did however know that if he was in the film then monsters and dinosaurs would soon follow, an assumption only furthered by the fact that it was only those movies of McClure that were shown over here in the UK.


Based on the novel of the same name by Edgar Rice Burroughs who is no doubt best known for creating both "Tarzan" and "John Carter of Mars" with this first book establishing the fictional hollow Earth of Pellucidar, which would be featured in a further six books with even Tarzan paying a visit to this mysterious land. Needless to say it makes for the perfect vehicle for McClure who at the time was coming in hot on the back of the success of “The Land That Time Forgot” while also finishing off the trilogy that the British production company Amicus had unintentionally created with the prior releases the aforementioned Land that Time Forgot and its sequel “The People That Time Forgot”. This time though he is teamed up to great effect with a blustering Peter Cushing who here is pretty much transferring his Doctor Who persona to a different film, which really only adds to the fun, especially when he’s so frequently hamming things up. Still despite this added bonus or distraction depending on your stand point on his performance, this film really is just business as usual for McClure especially as the film wastes almost zero time before we get out first giant monster encounter, something only added to by the raw awesomeness of McClure who is so cool he’s able to run while still smoking a cigar!


The plot itself is pretty minimalistic and generally serves to fill in the gaps between the monster action and McClure finding someone new to brawl with, which is essentially what he spend most of the film doing, as together with Cushing they form the perfect blend of brains and brawn. This is not to say that David is some square jawed thug, as he frequently proves himself capable thinking through situations especially when it comes to befriending the native human population who handily also speak perfect English despite having no contact with the surface world. Of course such things are minor concern, seeing how the main draw of McClure’s monster movies was the monster themselves with this film featuring the most varied selection from gigantic monsters through to carnivorous plants and even a fire breathing frog here they really pull out the stops with these creations, while clearly not trying to base them on any sort of known dinosaur which was always seemed to the case in the other films.


The villains here are pretty hammy to say the least with the rubbery and far from aerodynamic Mahars, who when not communicating telepathically through a migraine inducing whine, generally just sit around on their cliff top leaving their comb-over loving Sagoth servants to do all the work for them. Unsurprisingly for a bunch of guys in questionable dinosaur costumes when they do take flight it looks as you would expect like a they are flying around with the same sort of wire work you’d expect from a pantomime Peter Pan, while  by the end of the film the production team had clearly had enough of them as they look suspiciously like they have been stuffed with newspaper and just tossed off the cliff top


Shot on soundstages at Pinewood Studios it is perhaps a more limited prehistoric world, but seeing how director Connor was trying to deliver an epic on a budget its not too distracting even if the world is far from as immersive as the other McClure monster movies. However with a large amount of the action taking place in the volcano lair of the Mahar’s it doesn’t ever prove too noticeable until you start looking at the film more closely. Thankfully though Connor keeps things pretty busy on screen for you to pay too much attention to the surroundings for there is usually some monster or heated battle to enjoy and when neither of those are available he generally just parades the scantily clad future Bond girl Munro in front of the camera.

While this might have been a childhood favourite, it still holds up surprisingly well even if perhaps I am viewing it with a healthy dose of nostalgia which certainly helps when some of the creatures are more noticeably rubbery looking than they perhaps did back then. At the same time though this is still a highly entertaining romp aswell as arguably the best of the McClure’s monster movies or making a suitable double bill partner with “Yor: Hunter of the Future”.
Posted by Elwood Jones at 11:54