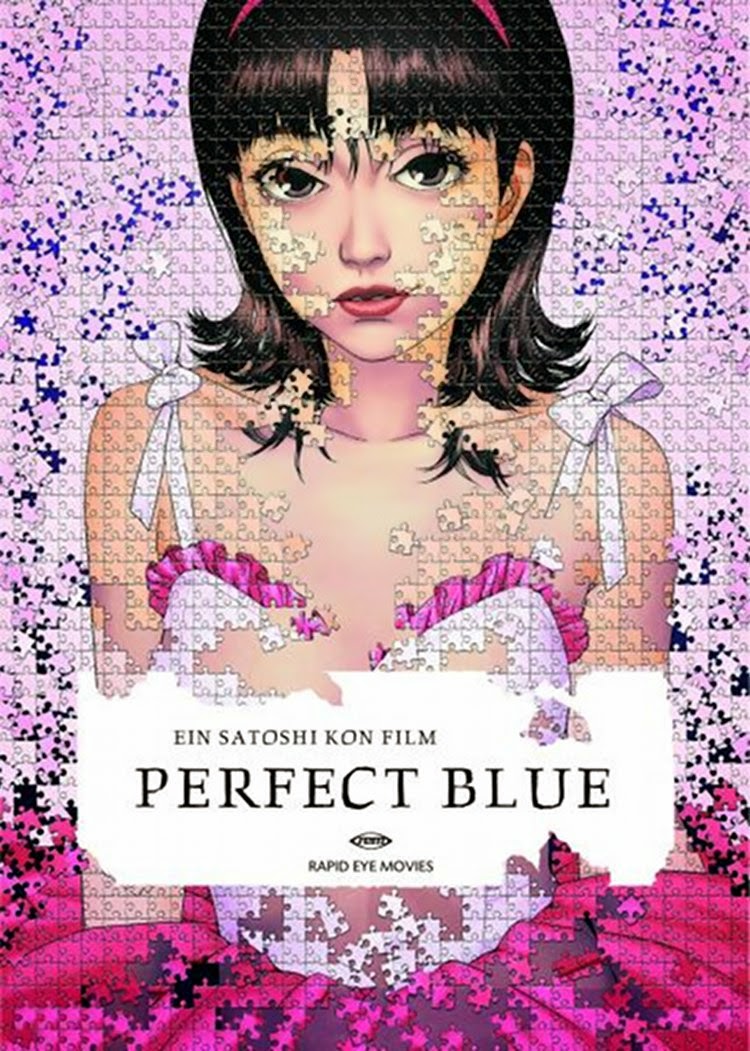 
Plot: Mima , a member of a J-pop group “CHAM!” decides to pursue a career as an actress, displeasing her fans especially her stalker Me-Mania (Okura). Now finding herself the target of threatening fax’s and mail bombs, things only get stranger when she discovers a website call “Mima’s Room” documenting her life if she was still with the band, as Mima finds her world being turned upside down as she is pushed to the brink of her own sanity.


Review: One of the great masters of Japanese animation, the career of Satoshi Kon would be tragically cut short when he lost his battle with pancreatic cancer, but it would be a stunning body of work he would leave us with, if perhaps sadly also one of the most overlooked.


Here he makes his directorial debut with a Hitchcock-esq thriller and which I frequently like to use as reference point when it comes to arguing the fact that anime is more than cutsy characters, tentacle porn and schoolgirl fan service which frequently seems to the opinion shared by those not familiar with the genre outside of the parts which regularly gain mainstream exposure. True this film is not without its shocking moments with several bloody murders and a scene were Mima is forced to act out a nightclub group rape. However this is more than shock value as it also serves to mark out a snapping point for Mima and her already fragile psyche, as she soon starts questioning what is real and what is fantasy, while Kon leaves the audience to question the same things for themselves, yet resisting the urge to take the audience down a Lynch style rabbit hole.


Based on the novel of the same name by Yoshikazu Takeuchi, who also wrote the original screenplay, which Kon was unhappy with and ultimately would have the script reworked by Sadayuki Murai with Takeuchi’s permission providing that the three elements of Idol, Horror and Stalker were kept Takeuchi was happy for Kon to make any changes he liked. Interestingly this film was originally intended to be filmed as live action adaptation only for the film to be turned into a OVA when the production studio was damaged during the 95 Kobe earthquake. A live action version directed by renown pink film director Toshiki Sato  would be finally released in 2002, which reportedly is a lot closer to the source novel than this film.


A griping film throughout, the film though is a lot deeper than your usual psychological thriller, as while most thrillers would be content to just play off the mystery of “Mima’s Room”, here Kon’s focus on the changing personality from Virginal pop idol to driven actress willing to do more and more to ensure that she makes it as an actress, even if it means shattering the image her fans have on her, with her agreement to film the aforementioned rape scene only being the start of the slow reveal of her much darker side.


At the same time Kon shows equal attention to the supporting characters who all provide their own piece of the puzzle, from Mima’s office Manger Tadokoro (Tsuji) who pushes Mima into increasingly risque situations which he convinces is for the good of her career regardless of the pressure it puts on her already fragile psyche through to the obsessed  and grotesque stalker Me-Mania who plasters his walls with images of Mima’s pop idol form which in one memorable scene even speak to him. Kon though is equally mindful of the smaller details which often prove as a result to be just as memorable, such as an actor involved in filming the rape scene apologising to Mima during a break between takes.


The animation is crisp and clean throughout, with Kon choosing to avoid the more traditional large eyed anime style, instead for a more realistic style as seen with the wide range of character designs and while it might not have the wow factor that many have come to expect thanks to the releases of Studio Ghibli this is still visually a nice anime to look at, with the movement of the characters being especially spot on as especially highlighted during the ice pick murder sequence involving a length chase around the victims apartment.


Unquestionably this would be a memorable debut film from Kon and one which he would continue to build on even if he would choose to explore other genres with the films which followed, he would thankfully return to explore the themes here further with the series “Paranoia Agent”.  On its own merits though this film really is a benchmark in Japanese animation aswell as also providing the inspiration for Darren Aronofsky’s “Black Swan”, making it only the more of a shame that it hasn’t been given the same recognition as the likes of the legendry “Akira” or “Ghost In The Shell” and like “Wings of Honneamise” has resulted it in being missed out by the more casual anime viewers which is something of a shame, especially when it is the sort of film which serves to highlight the range of styles which Anime covers.
Posted by Elwood Jones at 15:10

Email ThisBlogThis!Share to TwitterShare to FacebookShare to Pinterest
Labels: Anime, Psychological Thriller, Satoshi Kon, Shamefully Underated, The Darker Side of Popularity, Under The Radar