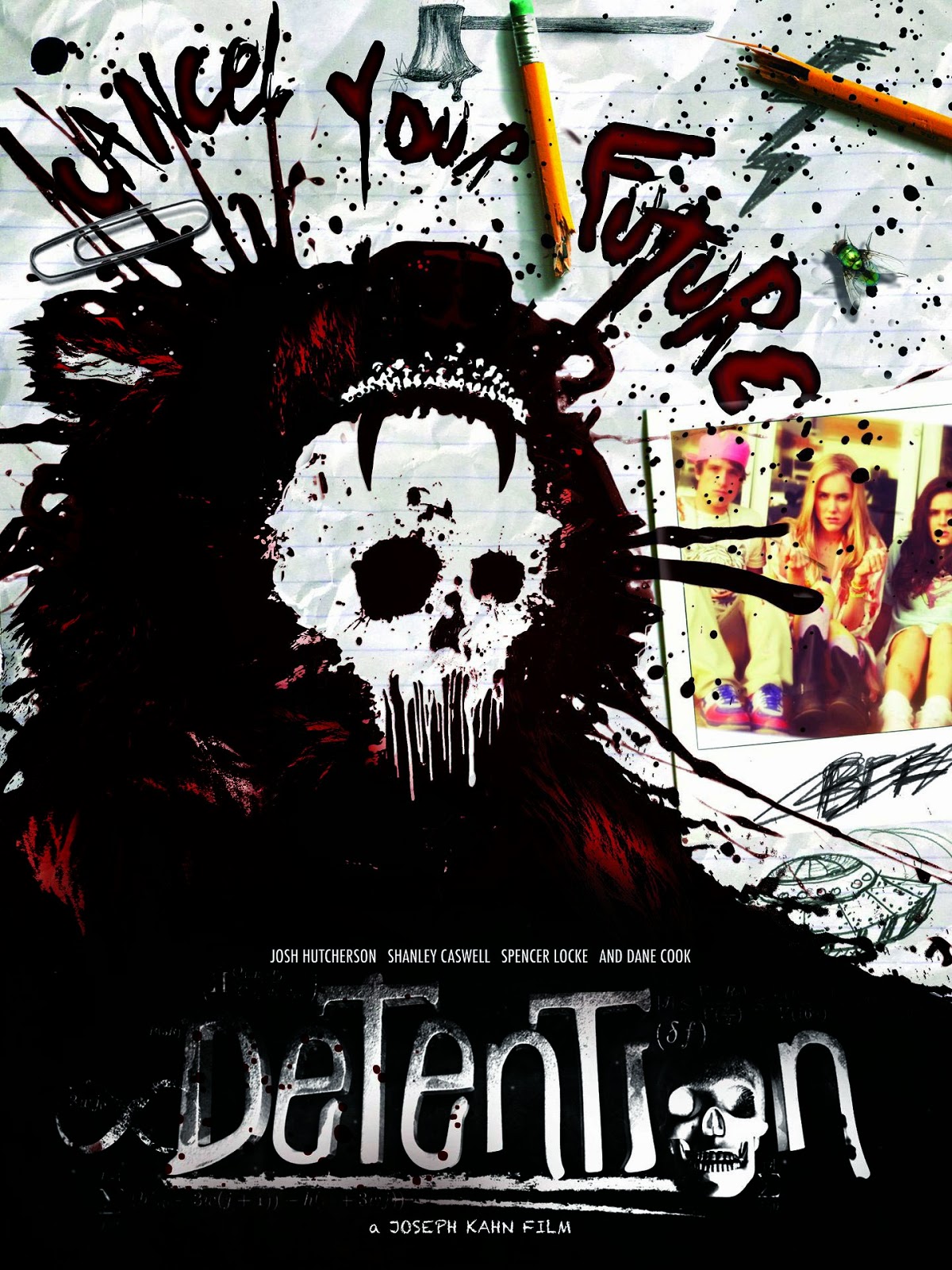 
Plot: A killer dressed as the movie slasher Cinderhella is stalking the students of Grizzly Lake High School, leaving a group of co-eds to band together survive while serving detention.

Review: So once again I have found a film which makes me throw my hands up in despair, as I wonder how I can ever start to review it as if I thought “If…” was a tough film to critique, this one presented an equally daunting critical mountain to scale by the time the credits had rolled.
Unlike the aforementioned “If…” the issues presented by this film was less about the artistic directing choices, but more due to trying to figure out what it was exactly that I had watched, as director Kahn comes off here like someone has a heap of smart and witty things to say and show you, while at the same time too easily distracted to put them into any kind of logical order. As a result this film is the same sort of visual assault of ideas that “Southland Tales” took, yet in comparison even that film is more coherent than this one and yet despite the fact I’m still not sure I fully understood what this film was about I did strangely still enjoyed it.


The second feature film by Kahn after his forgettable debut and “Fast and Furious” on a motorcycle cash in “Torque”, he is no doubt better known for his work directing music videos and commercials, a field which has previously given us visionary directors like  David Fincher and Mark Romanek, with Kahn also bringing a level of visual flair to this low budget and self-financed horror-comedy which he choose to follow “Torque” with after being replaced by Vincenzo Natali (best known for “Splice” and “Cube”) as the director of the long mooted adaptation of William Gibson’s “Neuromancer”.


Opening with a “Clueless” style monologue / rant by the school’s most popular girl Taylor (woods)…well that is until she is suddenly cut short mid “guide to not being a total reject” by the films killer. From here we cut to Taylor’s opposite Riley (Caswell) a cynical social outcast, whose sees herself being only one place above rock bottom which is currently occupied by the girl who performed oral sex on the school’s stuffed grizzly bear mascot. Riley’s world is shown as an endless hailstorm of crap, as starts the day with a half-baked attempt at a pill overdose, misses the school bus and has her iPod stolen by a hipster mugger. Both of these scenes are peppered with the characters breaking the forth wall and laced with sarcasm and acid tipped barbs while generally setting you up for the randomness which follows.


It is after the opening monologues that things not only just weird but downright random as plot devices start to fly off on a whim, with fewer still actually being seen though to any form of completion let alone followed with any kind of logical sense. So while the film would have worked fine as high school slasher with elements of social satire, Kahn feels inclined to cram in additional elements and subplots including alien abduction, mutations and time travel none of which are properly worked into the plot and frequently dropped in at random and more often without warning, leaving the viewer disorientated and frequently struggling to keep up with the amount of elements being juggled at any one time.


Still when taken apart and viewed for its individual parts there is a lot of fun elements at throughout the film, like the 90’s obsessed Lone (Locke), the star football player who for some reason is turning into a human fly (a very unsubtle rip off of Cronenberg’s 1986 remake) and whose father made him wear a TV over his hand as a child in a scene every bit as surreal as it no doubt sounds. It only makes it more of a shame that with so many random ideas on show here that Kahn can’t seem to manage the same delicate balance of surreal imagery and coherent storytelling that the likes of Richard Kelly and Greg Araki have frequently brought to their films and seemingly what Kahn was aiming to achieve here, only to ultimately end up with a frequently confusing but none the less fascinating car crash of ideas.


The cast assembled here are all pretty much unknowns, yet bring plenty of energy to the film, especially in the case of Caswell who as Riley is well deserving of a spin off, if perhaps a more focused one, as she makes for the perfect lead with her balance of sarcastic jibes and general despair at having to endure with being berated on a daily basis by the so called popular kids. Elsewhere the rest of the cast play their roles well, though frequently come off more memorable for their character mannerisms than for their performances.


Judging by how under the radar this film is, with the only noteworthy releases before it’s DVD release being the handful of appearances at various film festivals with its showing at Frightfest being how I came to discover it originally were its highlighted genre hopping antics caught my attention. So now having finally got around to watching it I can testify that it is certainly one of the more unique films I have watched of late, while its heavy flaws prevent me from enjoying it more and yet I still feel compelled to recommend you give it a curious watch, if only to experience it for yourself. So if you’re feeling uninspired by your current viewing and craving something different yet not too out there, why not give this a watch.
Posted by Elwood Jones at 15:32