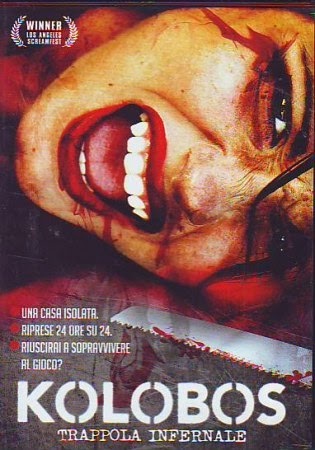 
Plot: Five strangers are brought together to spend three months living in a Big Brother style house under the pretence of being part of an anthropology-related experimental film. However soon it becomes clear that not everything is what it seems.

Review: One of those films I have been meaning to watch for the longest time, only to get delayed by other titles taking priority on the viewing pile but more largely because it has hardly the most memorable of titles. Title aside this equally not the most talked about movie out there, with almost minimal reviews and while it might not quite be on the same obscure levels as "The Long Lunch" it is certainly under the radar. Now while 1999 might have been an incredible year for cinema, I can sadly report that now having finally watched this film that this was not one of the better ones to come out that year.


The sole film to be directed by the Swiss duo, before following it with individual features which saw Liatowitsch directing the MMRPG documentary “Avatars Offline” while Ocvirk wrote the DTV zombie movie “Last Rites” both then disappearing from the movie making scene altogether. This film would also invariantly be a forerunner to the more remembered “My Little Eye” which essentially gave us the same film while perhaps taking a more unique approach by being shot from the perspective of the surveillance camera, while here directors Liatowitsch and Ocvirk opt for a more traditional route as the house setup serves more as a reason to bring the characters together than anything else.


Frustratingly the first hour of this film is pretty solid, with the group all being introduced via selection of audition tapes as we meet failing stand up and self-convinced funny man Tom (Terranova), struggling b-movie horror actress Erica (Pelerine), college drop-out Gary (Fairlie) and fast food worker Tina (LaMarco). This group are also joined by artist Kyra (Weber) who is looking to move on from her recent time spent in a halfway house for her increasingly dark visions which she channels into her artwork. All of the main cast are likeable in their roles even if there are a few moments were some of the cast overplay their part, yet at the same time it is hard to not place these moment equally on clunky dialogue. It is equally interesting that this group of fame hungry wannabe’s all looking for their ten minutes of fame would get just that by appearing in this film as none of them would go on to do anything else following its release, with the exception of Weber who fittingly plays the group outsider. Weber perfectly portrays Kyra who spends most of the film unable to tell if Faceless is real or one of her visions, much less if she is responsible for what is happening in the house.


A relatively short film at 90 mins, but boy did that last half hour drag which is even more surprising considering how the tension is slowly cranked up in the first hour, with ghostly visions of a faceless figure around the house, let alone a hand creeping out from under the bed. However once it hits the one hour mark the film suddenly hits a downward spiral from which it never recovers as the house turns into a deadly funhouse of booby traps as the group find themselves being picked off one by one by the faceless killer known simply as Faceless (Volok).


While the final thirty minutes are pretty formulaic I really can’t fault the film makers originality here, which when it comes to the death scenes it really has in spades with the detached head turned into a mirror ball being a particular highlight. Still from flying buzzsaws to an acid shower the death scenes really do for the most part deliver, while an antler impalement feels overly familiar to the infamous splinter sequence from “Zombie Flesh Eaters”. Each of the deaths are handled well even with the limited budget, with the buzzsaw death being especially memorable partly becomes it comes out of nowhere and secondary because of how the victim is left to writhe while the rest of the group believably freak the hell out.


Frustratingly during the final half hour the film dissolves into a standard stalk and slash format and while the deaths might be oozing in originality, there is a sense that the film is being rushed towards its conclusion (not that it moves any quicker trust me) with death scenes becoming increasingly sloppy or rushed. This of course brings me to my next issue and that’s with the ending which makes absolutely no sense as if you’re like myself you find yourself bouncing between two different ideas of what it all means, while also with the sneaking suspicion that the film makers are trying to be smarter than their script allows, much like opting to call the film “Kolobos” (the German word for mutilated) over its alternative and more fitting title “Haunted House”.

Irritating for how it throws away a promising setup, this is one worth more a curious rental than being actively sought and while the duo never choose to follow it up, it remains a tantalising prospect of what they could have achievd with perhaps alittle more focus and a tighter script.
Posted by Elwood Jones at 13:38