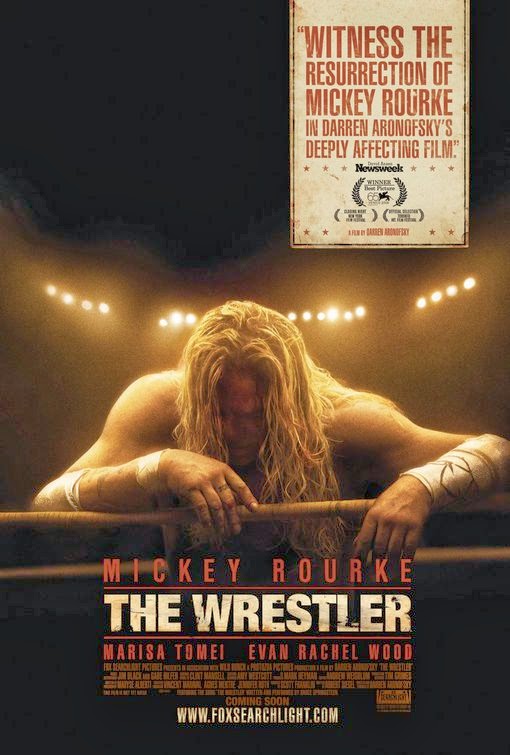 
Plot: Randy “The Ram” Robinson (Rouke) a professional wrestler long past his prime and now reduced to wrestling in small venues, is forced to face up to the end of his career after suffering a heart attack. Now he is forced to come to terms with a life outside of the ring, while attempting to reconcile with his estranged daughter (Wood) and his relationship with aging striper Cassidy (Tomei)


Review: Last weekend was the source of much excitement, mainly thanks to “Wrestlemania” which this year celebrated 30 years, which even the fact that it was being hosted by the franchise killer, wrestling relic and DTV star Hulk Hogan it did little to my general enthusiasm for the event, as yes I’m a wrestling fan. So what better time to revisit this film, along with the fact that “French Toast Sunday” have declared the whole of April to be “Darren Aprilofsky” as part of their ongoing season of director dedicated months.


When it was first announced a lot of people dismissed this film believing that it would another hokey feel good sports movie, which is kind of understandable seeing how it is set in the world of professional wrestling. However what Aronofsky gives us instead a much more moving and even more surprisingly respectful look at the world of professional wrestling. Here Aronofsky doesn’t question the appeal of a sport were matches are pre-determined, but I instead keeps the focus purely on the wrestlers, stepping behind the curtain as he shows us scenes of wrestlers discussing how their matches will play out and tactics to ensure that they get the best reaction from the crowds.


Randy despite being long past his 80’s glory days when we meet him, Randy is still making a living off his past glories as fans still worship his in ring performances no doubt with a heavy dose of nostalgia. Meanwhile outside of the ring his situation is far more grim as he finds himself forced to sleep in his van when he fails again to make the rent on his trailer park home, while being forced to make ends meet working a low wage supermarket job. He is also a character truly brought to life via a career best performance by Rouke who embodies this character while only adding further depth thanks to the similar struggles that both Rouke and his fictional counterpart have. It is also very much a less is more style of performance were even the smallest of gestures speaks volumes.


Interestingly though Rouke almost didn’t take on the role as it had originally been given to Nicolas Cage, who depending on whose version you believe either stepped down to allow his friend Rouke to take on the role, knowing aswell that Aronofsky truly had Rouke in mind for the role. Cage on the other hand has gone on record to state that it was more to do with the time commitment required to achieve the look required. I would prefer to believe the first version. More amusing through would be the claim made by Hulk Hogan that he was also offered the role only to turn it down, a claim later dismissed as being yet more of Hogan’s usual bullshit when Aronofsky went on record to state that he had never offered him the role.


Rouke though is the perfect choice for Randy, even more so when he fully embraced the wrestling world, throwing himself into eight weeks of intensive wrestling training for the role which really helped when it comes to the wrestling sequences, especially when he frequently performs in these scenes with real-life wrestlers including a memorable hardcore match (wrestling with weapons) against Necro Butcher were the two wrestlers essentially brutalise each other with a variety of creative and painful looking weapons including one highlight which sees Randy using the prosthetic leg handed to him by a member of the rabid crowd. These wrestling scenes are only further added to by being filmed at live wrestling events including events held by the indie fed’s CZW and Ring of Honour, who along with both TNA and WWE were happy to show their support for the film and in many ways it only adds to the realism while further highlighting the respect which Aronofsky shows the sport.


More interesting though is the fact that here we have a sports movie which doesn’t follow the rookie or the underdog getting their shot at the big time as here Aronofsky chooses to make a film about someone at the end of their career a prospect which Randy continually ties to avoid by working out harder and increasing his steroid intake to keep up with the younger guys he is competing with. Ultimately Randy is forced to face the inevitable when he suffers a heart attack and the prospect of no longer being able to wrestle, while a haunting meet and greet alongside his fellow former greats only seems to highlight the future which awaits him as he surveys the damage they like himself have done to their bodies out of love for their sport.


It is equally interesting that the closest person to Randy is the aging stripper Cassidy, who like Randy is also facing the prospect of her own career coming to an end as she struggles to hustle private dances from clients who favour the younger girls. Together though they provide each other with a prospect of a life outside of their professions and while there is hints of a developing romantic interest between them it is an interest which ultimately only goes as far as a spontaneous make out session, quickly followed by regret on Cassidy’s part. This angle is far from the most interesting aspect of their relationship with the scenes of Randy reminiscing about his glory days and Cassidy helping Randy to reconnect with his daughter and in many ways finding happiness through their unorthodox friendship being far more fascinating to watch.


Unquestionably though this film sees Rouke at his career best, it only makes it more of a shame that he didn’t win the much deserved Oscar he was nominated for as he joins the wrongfully snubbed actors club which also includes Ryan Gosling in “Drive” and Tilda Swindon in “We Need To Talk About Kevin”. At the same time Rouke receives great support from both Tomei and Wood who are both able to hold their own while only adding to the emotional journey Randy finds himself on as he ultimately has to choose between doing the sport he loves which could ultimately kill him or to settle into a life outside of the ring. Even for non-wrestling fans this is still a gripping film, which for the established fans this is touching homage to the world of spandex clad heroes, as this truly is the "Raging Bull" of Wrestling movies.
Posted by Elwood Jones at 00:29