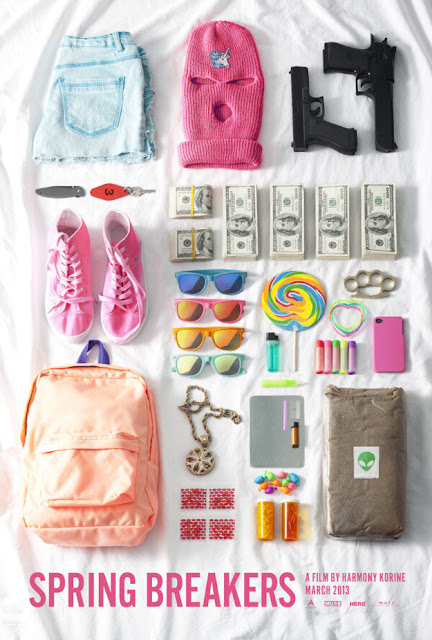 
Plot: When Candy (Hudgens), Brit (Benson) and Cotty (Korine) decide to rob a restaurant in order to fund their spring break vacation to Florida it only marks the beginning of their downward spiral into a life of crime that the group soon find themselves in and one which devout Christian Faith (Gomez) soon also finds herself drawn into as she overlooks her friends actions and joins them on their trip to Florida. It is while in Florida though that the girls soon find themselves drawn into the crime ring of Russian rapper and wannabe gangster Alien (James Franco).

Review: What happens when a  former Disney Princess decide to break away from the house of mouse for good? Apparently they thrown themselves into a hedonistic mix of sex, drugs, crime spree’s and pink balaclava’s, or so it would seem with this latest offering from indie maverick Harmony Korine, which see's Vanessa Hudgens (High School Musical 1-3) and Selena Gomez (Wizards of Waverly Place) Trashing their prom dresses to join Ashley Benson and Rachel Korine as a group of party loving college girls and lifelong friends who fall for the allure of crime and easy money.

Released under an onslaught of publicity stills of the female cast members in their bikini’s, this film seemingly had a blink and you miss it cinema release, meaning that it has taken an art society (yes they seemingly want to see young girls in bikini’s too) screening for me to eventually see this film*, which far from generated the kind of buzz I think the studio was expecting judging by the amount of publicity it was given ahead of its release. At the same time it is hard to place exactly what this film should be classed as seeing how at its heart it’s a crime thriller, yet director Korine still refuses to give up on his indie and experimental film making roots, as with the amount of bare flesh and drunken debauchery on show it would seem as if he has chosen to cross the film with a “Girls Gone Wild” video, while frequently shooting from the hip or like a stretched out and overly glossy music video. Korine though at this point in his career clearly knows films appeal to the few rather than the mainstream, even though this is miles closer to the mainstream than any of his previous films, it will no doubt still have all the feelings of a celluloid migraine for most movie goers.

Essentially re-rooting his breakout script for “Kids” (memorably directed by cinema’s l’enfant terrible Larry Clarke) from the poverty and grime of New York to the luminous bright lights and sun soaked beaches of Florida.  Like “Kids” the script feels largely improv, especially with Franco’s hip hop caricature Alien, who seems to embody the gangsta rap life style complete with glittering grill and cornrows in what is certainly an interesting look for Franco who is white as the driven snow and whom here continues his on going mission to rack to appear in as many surprising rolls as possible. Still here he certainly seems to be having a blast largely improving such a random character, who when not making his continual brags about money, guns or even having Scarface on repeat can be found frequently snarling out the words “Spring Breakkkk” and “Bitches” every other word. The girls meanwhile suffer from paper thin character development  to say the least, with Faith perhaps being the most developed of the foursome as we see her frequently being conflicted by the lure of the party life style and the desire to be a good Christian, with the film opening to her taking part in a youth Christian group (led by former TNA wrestler and founder Jeff Jarrett in a fun cameo appearance), while here she seems to be already questioning the mean of her faith, something which only further challenged when she arrives in Florida and finds herself amerced in the party lifestyle, especially as her friends are seemingly on a quest to keep the party going at no matter what cost.

While it might seem like stunt casting by using both Gomez and Hudgen’s here they prove themselves not afraid to act out of their comfort zone, especially in the case of Hudgen’s who continues on to break away from her clean cut image, having previously shown her feisty side in Zack Snyder’s cult favourite “Sucker Punch”, only kicks it up another notch here as one of the main instigators in the girls downward spiral. Sadly while all the girls might give adequate performances, there is still a sense of shallowness to the film, similar to how it ultimately portrays the so called Gangsta lifestyle and is only added to by the lack of development for any of their characters and essentially leaving them more often than not to play of their womanly charms than anything close to flexing their acting muscles.

The soundtrack is largely a mixture of electro / dance music by Skrillex with the occasional dash of gangster rap and while I can’t say that it really did much for me, it still worked well with the film, especially when Korine seems to be actively editing the film around the soundtrack, often giving it a glossy music video feel as a result, alas a music video featuring copious bouncing naked breasts and obscene alcohol consumption being shot in slow motion, but then isn’t this essentially what spring break is about…or so I gather coming from a English (and hence spring breakless) perspective.

While it might be easy to write this film off as being a lot of style and very little substance, Korine has still somehow managed to craft a film which is none the less engrossing, as he pulls a trick non to dismilar to the one Sofia Coppola did with “Lost in Translation”, although his execution is perhaps done with a more sleazier edge to it but this film like Coppola’s is one were essentially nothing really happens as Korine seems frequently to be just stringing together random scenes of improv and stylised violence alongside those of partying youths. However it is amongst these random scenes of excess and partying that we also get a number of memorable scenes including Alien playing a stripped down version of Brittany Spears’s “Everytime” on his poolside piano while Candy, Brit and Cotty dance around while welding shotguns and dressed in their trademark pink balaclavas which at the same time make this far from an unsatisfying viewing experience if ultimately a hollow one.

*This is an archive piece originally published at "Diamonds In Da Sky", apologies for confusion this might have caused,
Posted by Elwood Jones at 09:07