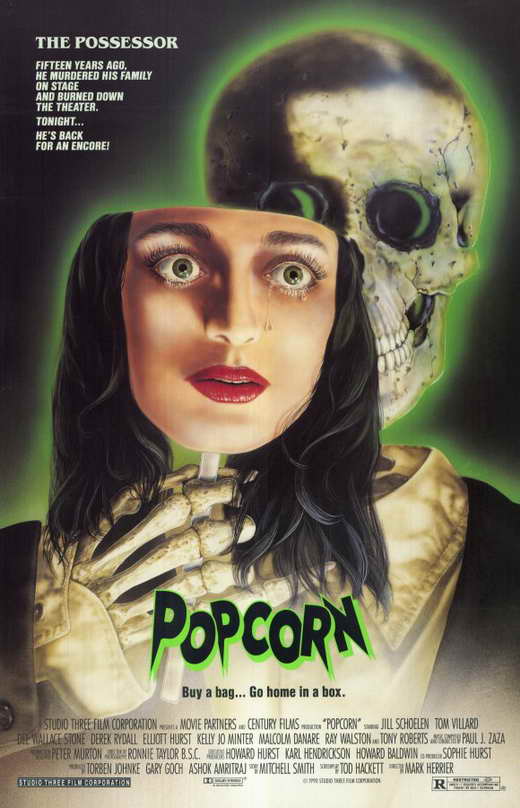 
Plot: A group of film students putting on an all-night horrorthon at an old cinema soon, find themselves being stalked by a crazed serial killer.

Review: One of those surprising films which haven’t for one reason or another managed to gain the cult status it deserves, this was a film I was recently introduced to by Jason from “Your Face” who picked at as one of his two films when he came on the podcast. Unlike his other selection “Sorority Babes In The Slimeball Bowl-O-Rama” this was a film which immediately grabbed me unlike the previously mentioned film which honestly might have killed this blog had it not been for this film.


While the film has a simple slasher premise, were the film really stands out is with the films which the students have chosen show, all of which come with their own William Castle inspired gimmick! These films include


Mosquito – a giant bug movie and throwback to b-movies like “Them”, the film uses Castle’s “Emergo”
gimmick from “House On Haunted Hill” replacing the Skelton which whizzed on a line above the audience’s head with a giant mosquito.


The Attack of the Amazing Electrified Man – A bizarre movie featuring scientists devising a serum to survive the electric chair (not sure why but still) only for the test subject to turn into a human dynamo who electrocutes anyone he touches. This film uses the gimmick of “Shock-o-Scope” which is essentially Castle’s “Percepto” he used for “The Tingler” and gives viewers an electric shock to their chair at a key moment.


The Stench – a badly dubbed Japanese movie, which uses the Smell-O-Vision, one of the few gimmicks not used by Castle, but was used in “Scent of Mystery” aswell as with the scratch and sniff cards issued for John Waters “Polyester” were everyone essentially paid Waters to sniff a fart.
Better still we get to see parts of these films throughout as they are used as films within a film, with each of these films being real cornball spoofs of the b-movies they are paying homage to and with the first two certainly give the film frequent bursts of fun.


Meanwhile the main plot of the film suffers not only due to a lack of pacing, but also from trying to combine a number of random plot ideas into the same film as film student Maggie (Schoelen) suffers from a strange reoccurring dream of a strange man trying to kill her, which she’s also attempting to turn them into a screenplay. The group meanwhile find a short experimental film called “Possessor” whose creator killed his family on stage when the film was originally shown.  On top of all this and the b-movies being shown we also have the serial killer who has the ability to turn himself into anyone he wants using latex masks.  This of course is the simplified version, as we also get a number of random scenes such as Maggie’s mother going to the movie theatre and being hit by letters which fly off the marquee which are then replaced by the title “Possessor”. Things only get stranger when she enters and the film playing on the screen starts talking to her, seemingly indicating that something supernatural is happening in the theatre, which of course its not making it you wonder all the more why these scenes much like the character of Dr. Mnesyne who shows up and then randomly disappears without a reason ever being given.


It’s hard to say were the blame for the flaws in the film lye especially with the films original director Alan Ormsby being replaced by Mark Herrier during filming and for whom this remains his sole directing credit. Ormsby meanwhile still directed all three of the films featured within while Herrier handled all the present day footage. It of course only makes me wonder what Ormsby would have done different had he directed the whole film, especially when his b-movie segments are amongst the strongest parts of the film.


Filmed in Kingston, Jamaica not that you would realise it, this does however go some way to explaining the two random reggae interludes, which seem to go down well with the kids in the theatre, even if it does seem out of place, much like when the reggae band showed up in “Never Been Kissed”. Also for such a niche movie going experience they manage to attract a full house of people many in random monster costumes which have nothing to do with any of the films being shown.


As a slasher there are some great inventive kills here, with most tying in some way to the film being shown, such as being impaled on the giant mosquito. The most creative though sees one of the teens being wired into the control board which controls which seats are given electric shocks. So while the shocks are being given out, he is trying to escape before the switch connected to his own chair is triggered. We also get a random scene of a character panicking that he is stuck in a toilet with an activated stench capsule, when there is clearly room to either climb over or crawl under the door!


As I mentioned already the film suffers heavily with its stop start pacing, which really stopped me from enjoying what is when it works a pretty fun film and one I would rate higher if there wasn’t so many scenes which seemed to do nothing but slow the film down. Still as a homage to the gimmicks of William Castle this film really has some nice touches, while the killer’s gimmick of using masks to impersonate members of the group is really great even his motive  ultimately feels slightly convoluted, especially when you see his final game plan. Still if you want a slasher with a side order of schlock then this much overlooked film could be for you.
Posted by Elwood Jones at 07:36

Email ThisBlogThis!Share to TwitterShare to FacebookShare to Pinterest
Labels: B-Movies, Homages, Slasher, The Ass End Of Okay, Under The Radar, William Castle