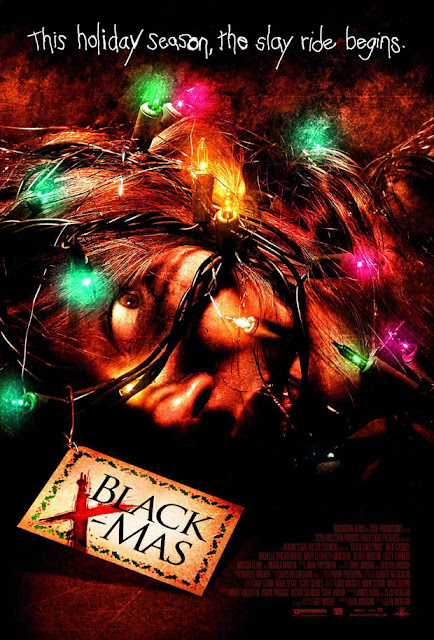 
Plot: Bily Lenz has been locked up in a mental asylum for the last 15 years after murdering his mother and her lover aswell as gouging out the eye of his sister. Now on Christmas Eve he escapes and returns to his former home only to find that has in the time since his incarcinration


Review:  Yet another remake while one which chooses to tackle Bob Clark’s 1974 original which as I covered in my review of the original was also one of the first slasher and one which would have a much more subtle tone than the slashers which followed in its wake. The remake however is very much a different beast as here director Glen Morgan tackling his second remake after “Willard” attempts to update the plot of the film by adding a back story for Bily while also upgrading the body count and violence seemingly in an attempt to craft a more traditional slasher out of the original.


As a result of this Morgan spends the first hour of the film attempting recreate the setup of the original film while cutting out some aspects such as the abortion dilemma and the fact that everyone seemingly was a drunk. It’s also within this first hour that Morgan also randomly attempts to work in a back story for Billy as we are treated to a series of flashbacks to his childhood and the events leading up to his incarceration, however these are not shown as one sequence but bizarrely spaced out into three separate segments which are clumsily dropped into the film often at the most random of moments. What makes this worse is the fact that none of these flashbacks really add anything to the film and seemingly were only included as a way to explain why Bily is the way he is, much like Rob Zombie’s “Halloween” remake only with much less successful results.


Here the character of Bily still makes his unique prank calls, only now he inexplicably suffers with severe jaundice due to liver disease and which in turn means that we now have to deal with a killer who looks like he’s auditioning for a live action version of “The Simpsons”. If that wasn’t bad enough his sister Agnes is a product of his mother raping him after she locks him in the attic to stop him revealing the fact that she had killed Billy’s father. When it comes to the kills he now also has a fetish for removing the eyes of his victims. Needless to say this is a much more gratuitous slasher we have this time around as subtly is thrown out the window in favour of splatter and a healthy body count.
Surprisingly Morgan had originally planned for this film to be closer to the original, having been friends with Bob Clark and only tackling the remake when he’d got Clark’s permission to do so. However during the production he frequently found himself clashing with producer Harvey Weinstein who insisted that he make the film more gory and part of the reason why Morgan has since disowned the film. Its equally worth noting that the fact that this film was a flop along with his remake of “Willard” caused Morgan to retire from directing which as of the time of writing has yet to change.


Despite Morgan’s feelings about the gore in the film it is one of the stronger aspects of the film when it works, as several moments in particular those involving eye balls being gorged or munched on. The other kills however all come with a high level of creativity which includes a death by ice skate and a falling icicle. This film also might be one of the only occasions I can think of where someone is killed by impaled on a Christmas tree more so when most Christmas trees only have to be looked at wrong to fall over so you have to excuse my scepticism that someone could actually be impaled upon one. Most of these deaths come after the hour mark for this film and once they start happening they quickly start to rack up with no real spacing between them which would be more of an issue if they weren’t so entertaining to watch.


The other main issue here is that none of the girls are particular distinguishable from each other, as they all share seemingly the same personality while once more seemingly been cast for their looks than their acting abilities as unlike the girls of the original I couldn’t really tell who anyone was especially when none of them really have any sort of basic character to define any of them. Infact the only character who gets any sort of character is our crazed killer Billy and that’s more down to the gratuitous amount of flashbacks we get more than anything else.


Consider that Morgan gave us the wonderfully daft Final Destination 1 & 3 I was expecting more from this film, hoping that the critical lashing it had received had been uncalled for. Sadly though this film fails to improve upon the original, though its hard to say if the fault lies with Morgan or the interference from Weinstein, more so when the finish film is left so uneven as it tries to find a place between the two ideas of how the film should be shot.  As such this is now just another failed remake while one scattered with hints of how much better it could have been.
Posted by Elwood Jones at 14:51

Email ThisBlogThis!Share to TwitterShare to FacebookShare to Pinterest
Labels: Alternative Christmas, As Screwed Up By The Weinsteins, Cannibals, Remakes, Slasher